‘Freedom Convoy’ Truckers Are Standing on Principle – When Will Republicans?

Rusty Weiss
|
Posted: Feb 23, 2022 12:01 AM
Share   Tweet
The opinions expressed by columnists are their own and do not necessarily represent the views of Townhall.com. 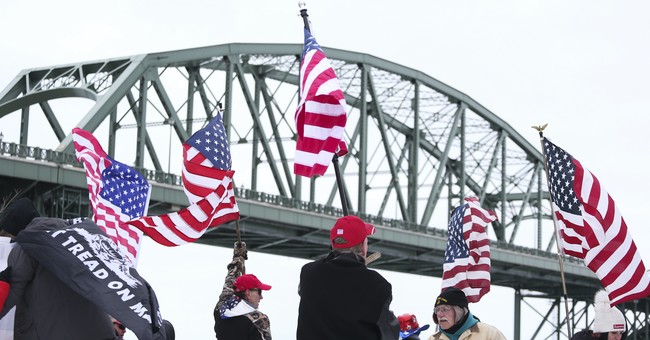 "Always stand on principle ... even if you stand alone." - John Adams

He questioned just how quashing a peaceful protest against government overreach squares with freedom of speech.

That same leader railed against the "violent" actions being taken to break up the peaceful convoy in Ottawa.

"The Violent crackdown on [the Freedom Convoy] has nothing to do with freedom of speech and human rights," he tweeted. "How coercion could be related to liberty [and] freedom of choice?"

Who was that world leader? Former Iranian President Mahmoud Ahmadinejad on Twitter:

"The Violent crackdown on #FreedomConvoy2022 has nothing to do with freedom of speech and human rights. How coercion could be related to liberty & freedom of choice?#TruckersForFreedom."

Our neighbors to the north watched later that week as law enforcement descended on the trucker convoy – which generated as a massive and peaceful demonstration against the US-Canada cross-border vaccine mandate – and chaos ensued.

The world watched in horror as video emerged of an elderly woman along with others being trampled by police horses.

The images – reminiscent of the famed Tiananmen Square tank images from 1989 – are haunting, and may be the defining moment that comes out of the crackdown initiated by Trudeau and authorities in Ottawa.

Power corrupts. When U let your governments power go unchecked this is what happens. History has proven this fact many times. Freedom is not free, the left fail to see this, just because u agree with your govt today does not mean u will agree with them tommorrow #freedomconvoy22 pic.twitter.com/UNHmKkD9dC

Another video shows a police officer using the butt of their gun to corral a protester. Still others show officers using repeated knees to an already downed protester.

It is without a doubt some of the most disturbing footage to come out of a peaceful protest in a Western country in a generation.

And, if you’re seeking to find out what is going on in Canada by checking in with your Republican Senator or Representative, you’d hardly know what took place.

Truckers involved in the 'Freedom Convoy' protest against government overreach have had their bank accounts frozen. Protest leaders have been arrested and will be charged criminally.

Tamara Lich, one of the main organizers of the ‘Freedom Convoy’ was denied bail.

Protesters have been threatened with seizure of their vehicles, fines, revocation of their licenses. Children have been used as pawns. Authorities have even threatened to seize truckers' pets.

All prompted by Prime Minister Justin Trudeau’s use of emergency powers designed for use against terrorist groups.

If you thought sanity simply had to regain it’s footing, Canadian lawmakers voted to extend those powers even after seeing the out of control displays of force they are being used for.

And yet you’ll hear nothing but crickets from so-called leaders in the GOP.

The most confounding question here is how did Ahmadinejad of all people get out in front of the entire Republican party in condemning Trudeau. How did he beat them by saying something they should be conveying all day, every day?

This seems like a cause aligned with conservative beliefs - adherence to the Constitution, protection of free speech, protesting against government overreach - that Republican lawmakers could really latch on to.

So, where the hell are they? If this isn't a hill to die on, what is?

"The Freedom Convoy is peacefully protesting the harsh policies of far-left lunatic Justin Trudeau who has destroyed Canada with insane Covid mandates," he said in a statement.

Trump isn't in power, however. Those who are in power really need to step up their game.

What? It was safe to support the "Freedom Convoy" when it first started but now, we give Trudeau a little wink and a nod, giving him a pass to end it by any means necessary?

Fox News host Tucker Carlson has been one of the few voices with the moral conviction to speak out against Trudeau's actions.

"This is a peaceful, political protest. No one has shown any evidence to the contrary. It's not a drug trafficking or human trafficking operation. It's not Al Qaeda," Carlson told his audience.

"These are Canadian citizens who drive trucks for a living, but they're being treated like a terror group."

Beyond that - Where are the Republican voices? Why have they struggled so mightily to find a backbone on this cause?

Lawmakers should be on the steps of the Capitol at this very moment, holding a press conference. They should be voting on resolutions to condemn Trudeau for his heinous actions. They should be giving speeches on the virtues of freedom that we have here in the United States - from morning to night.

"Always stand on principle ... even if you stand alone," John Adams, one of this nation's founding fathers once said.

And when you do, you surely will not be standing alone. American truckers, at least, are poised to do what Republicans are too weak to bother with – stand on principle.

If the GOP cowers at the sight of a peaceful protest being put down in Ottawa, what are the odds they’ll stand up for those in America?

Canadian protesters have been forced to lay down their sword in the fight. It’s time America picked it up off the battlefield.