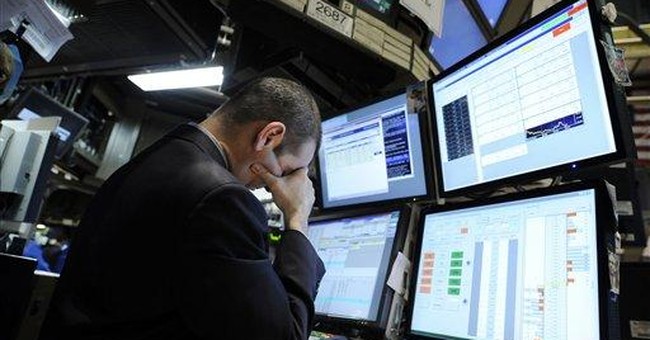 The federal government has committed $3 trillion in bailout money to automobile and financial companies. In London, the G-20 met amid protest signs with the seductively socialistic declaration: "Capitalism Isn't Working: Another World Is Possible." Given this climate, herewith recent quotations about an economy in devastation.

Terry Gou, the head of Taipei's Hon Hai Precision Industry Co., the world's largest manufacturer of electronics by revenue -- on the slump in the global technology industry: "The worst has not yet come. The problem is three times worse than everybody thinks."

John Tamny, editor of RealClearMarkets.com: "What's wrong right now is that investors don't trust the federal policies that got us here, and they're correctly horrified that the architects of today's crisis will now be given seemingly unlimited money to fix that which they broke. In short, investors have lost confidence in . . . a Washington political class whose very confusion has made the formerly venerated U.S. economy a laughingstock."

Steve Forbes, editor-in-chief of Forbes: "Alan Greenspan made headlines recently when he 'confessed' that his free market philosophy, which had worked for him for 40 years, had failed him with the credit crisis. Democrats licked their chops: This seemed to confirm their campaign mantra that Bush deregulation had caused the whole dreadful mess. . . . (But) the housing bubble never would have reached such obese proportions had it not been for Greenspan's weak-dollar policy."

Edmund Phelps, winner of the 2006 Nobel Prize in economics and director of Columbia's Center on Capitalism and Society: "Right now, our banking industry is barely operational. Whatever the corrective surgery indicated, the priority is to get the system operating. . . . What has occurred is not just an old-fashioned banking crisis, but also a banking scandal. Most of the big banks were shot through with short-termism, deceptive practices, and self-dealing."

Oklahoma Sen. Tom Coburn: "The root of the problem is political greed in Congress. Members . . . from both parties wanted short-term political credit for promoting homeownership even though they were putting our entire economy at risk by encouraging people to buy homes they couldn't afford. Then, instead of conducting thorough oversight and correcting obvious problems with unstable entities like Fannie Mae and Freddie Mac, members of Congress chose to . . . distract themselves with unprecedented amounts of pork-barrel spending."

George Melloan, former deputy editor of the Wall Street Journal's editorial page: "Keynesians were banished in the 1980s by Reaganomics but made a comeback years ago and again control U.S. levers of power. They argue that massive deficit spending by the federal government is the right policy for these times. Paul Krugman of The New York Times has asserted that the Great Depression lasted 10 years because the New Deal didn't spend enough. Japan tried to spend its way out of its post-bubble malaise in the 1990s but ended up with a mountain of debt and a 'lost decade' of little or no economic growth. Nevertheless, the . . . Obama administration is promising close to a trillion dollars in fiscal stimulus, and the Bernanke Fed seems to believe the way to deal with a collapsed bubble is to inflate it. . . . All that can be said to the Keynesians is, 'Better luck than last time.'"

Keynesian economist John Kenneth Galbraith, in a June 1999 address at the London School of Economics: "When you hear it being said that we have entered a new economy of permanent prosperity with prices of financial instruments reflecting that happy fact, you should take cover. This has been the standard justification of speculative excess for several centuries -- for a good part of the millennium. My one-time Harvard colleague Joseph Schumpeter thought inevitable and even beneficial what he called 'creative destruction' -- the cyclical process by which the system eliminates the people and institutions which are mentally too vulnerable for useful economic service. Unfortunately, the process has larger and less benign effects, including the possibility of painful recession or depression."

ABC-News.com columnist Michael Malone, author of the forthcoming "The Future Arrived Yesterday": "Combined with all of the other impediments put up this decade by government against new company creation, an increase in the capital gains tax could end most new (non-government) job and wealth creation in the U.S. for a generation. If Mr. Obama is serious about getting the country out of this recession using something more than public make-work projects, he should restore the integrity of the new company creation cycle: Rewrite full disclosure, throw out options expensing, make compliance with Sarbanes-Oxley rules voluntary, and . . . at least leave the capital gains tax rate alone. Otherwise, Mr. Obama might end up being remembered as the second Herbert Hoover, not as the next FDR."

Wall Street Journal columnist Peggy Noonan: "We are the oldest continuing democracy in the world. . . . We don't make refugees, we admit them. When the rich of the world get sick, they come here to be treated, and when their children come of age, they send them here to our universities. We have a supple political system open to reform, and a wildly diverse culture that has moments of stress but plenty of give. . . . The point is that while terrible challenges face us -- improving a sick public education system, ending the easy-money culture, rebuilding the economy -- we are building from an extraordinary, brilliant, and enduring base."