From Illinois to Wall Street to Wal-Mart and Beyond 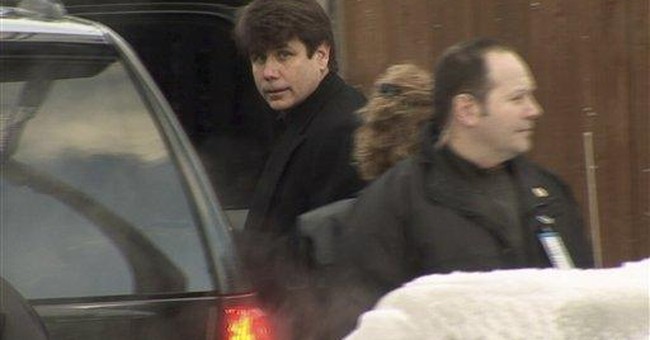 Brief comments, direct or implied, on items in the news....

The brazen Rod Blagojevich, governor of Illinois, stands (if guilty) in a long line of corrupt Illinois pols -- Otto Kerner, Dan Walker, George Ryan -- all of whom did, or are doing, jail time. Blago is a key cog in the Chicago/Illinois machine that helped raise up, among others, an unresisting Barack Obama ---evidently untainted in the Blago charges yet perhaps not unaffected. S'funny how Obama's ties to the machine received practically no serious interest from the national media, and vastly less than the "investigative" attention given Sarah Palin and her career in Wasilla, Alaska.

Blago follows New York's high-tone Eliot Spitzer down the path of disrepute. In his invitation to the feds to go ahead and record his telephone calls, Blago recalls the presidency-seeking Sen. Gary Hart -- who invited the press to track him to verify his affectional fidelity: Press intrepids did indeed follow him -- to the yacht Monkey Business boasting a bevy of squealy pneumatic damsels.

The latest from Illinois suggests the question yet again: How many pols are not the bums so many of them seem to be?

Then there are the nation's loftiest CEOs -- expensively coiffed, golden-parachuted and shameless. Large-company U.S. CEOs average well over $10 million in annual compensation -- even those who have led their companies precipitously down, even into bankruptcy. Execs of faltering AIG, the world's largest insurance company now enjoying $150 billion (and counting) in taxpayer money to stay precariously afloat, gave themselves an $86,000 hunting trip in England as their company spiraled south.

And Merrill Lynch's John Thain, whose principal achievement this year (when his brokerage house has lost $12 billion) has been to lead the company into a salvational merger with the Bank of America, had the audacity to hope for -- and request from Merrill's board -- a $10 million bonus. Thain's was a hope the board prudently dashed, albeit with considerable apparent reluctance.

Thain and such types have colleagues in obscene compensation -- the presidents of many private colleges. E.g.: According to the Chronicle of Higher Education, Columbia's president receives $1.4 million annually, Northwestern's $1.7, Suffolk's (in Massachusetts) $2.8 million. So, with endowments sharply down this year (Harvard's, for instance, has plunged $8 billion), will these private-college presidents turn suddenly frugal and whack their own salaries? Or alternatively, will they still again boost tuition, room, and board -- now averaging at such schools nationwide about $50,000 per year?

'Tis the season, of course -- which this year likely will not end until the January 20 inauguration of a presumed secular savior and the corresponding departure of the dread George Bush. The D.C. city council, giving new meaning to the term "emergency legislation," has joined in the fun with an ordinance allowing bars and clubs (a) to remain open for 24 hours between January 17 and 21, and (b) to serve booze until 5 a.m. each of those days.

The season began on what now is known as "Black Friday" (the day after Thanksgiving), so called to connote the opening of pre-Christmas shopping in earnest. At 5 a.m., Jdimytai Damour opened the doors of a Long Island Wal-Mart to a throng of shoppers lusting to be first for bargains. Rushing in, the fools trampled about a dozen people including Damour, who will know no more holidays ever -- happy or otherwise. The shopper surge took his life.

From the political front, three items:

(1) All told, campaigns to elect a new president and Congress cost about $5.3 billion -- this from the Center for Responsive Politics. That's a lot of green, yet according to the National Retail Federation not so much as the $6 billion Americans spent on ... Halloween.

(2) The defeat of Connecticut's Congressman Christopher Shays marks the departure of the last Republican New Englander from the House. And the Senate may not be far behind, with but a single Republican from New Hampshire and two from Maine. For congressional Republicans, New England is becoming a grim and barren land.

And, oh yes, (3), Pakistan's widower president, Asif Ali Zardari, has the hots for Sarah Palin. At the United Nations in September, he greeted her in what news reports described as an "overfriendly" way and termed her "even more gorgeous" than her pictures. President Zardari's words and actions earned him a chastising fatwa from Islamabad's Red Mosque. The mosque's Abdul Ghafar ripped Zardari for "indecent gestures, filthy remarks and repeated praise of a non-Muslim woman in a short skirt."

Does the culture move -- does it ever improve? From the brazen and blaspheming Blago to the dubious David Letterman, the dialogue descends. Letterman? Indeed: During the campaign he confessed that John McCain's selection of Sarah Palin was the first time he ever has been aroused by a vice-presidential nominee.

Another Fauci Lie About Masks and the COVID Vaccine Comes Back to Bite Him
Townhall
Boobs for the WIN! Gina Carano uses PERFECT meme to make her point about red states like Texas and Florida kicking butt
Twitchy
How to Explain ‘Smart’ Jeopardy! Contestants Behaving More Unhinged Than Qanon
Redstate
Insanity Wrap #209: White People Even Walk Racist
PJ Media