Yes Prince Faisal, We Need to 'Recalibrate' Our Relationship

Ron Paul
|
Posted: Apr 26, 2016 9:51 AM
Share   Tweet
The opinions expressed by columnists are their own and do not necessarily represent the views of Townhall.com. 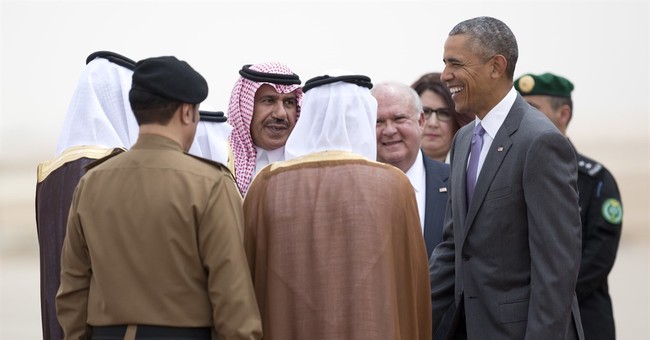 For decades the U.S. and Saudi Arabia have shared a peculiar relationship: the Saudis sell relatively cheap oil to the United States for which they accept our fiat currency. They then recycle those paper dollars into the U.S. military-industrial complex through the purchase of billions of dollars worth of military equipment, and the U.S. guarantees the security of the Saudi monarchy.

By accepting only dollars for the sale of its oil, the Saudis help the dollar remain the world's reserve currency. This has meant that we can export inflation, finance the warfare/welfare state, and delay our day of financial reckoning.

But it seems this longstanding entangling alliance is coming apart.

First, the U.S. nuclear deal with Iran has infuriated the Saudis. They view Iran as bitter rivals and spared no expense in Washington to derail the deal. They were not successful - at least not yet. They have also been frustrated that the U.S. has not devoted more of its resources to the Saudi "regime change" project in Syria, seen as a way to reduce Iranian influence in the Middle East.

But it is the potential release of the secret 28 pages of the 9/11 Report that purportedly show Saudi government involvement in the attacks on New York and Washington that threatens to really blow up U.S./Saudi relations. The relatives of the victims are demanding the right to hold the Saudi government legally accountable if it is shown to have had a role in the attacks, and the Senate's "Justice Against Sponsors of Terrorism Act" would lift Saudi sovereign immunity and allow lawsuits to go forward. The Saudis threaten to dump three-quarters of a trillion dollars in U.S. assets if the bill becomes law - a move that could rock world markets and even the shaky Saudi economy.

President Obama's disastrous visit to the Saudi capital last week may have been seen as the last straw. Billed in Washington as a trip to shore up relations, President Obama got the cold shoulder as the Saudi monarch sent a low-level functionary to meet the U.S. president's plane while he met an incoming delegation from the Gulf Cooperation Council. The message was pretty clear.

The Obama PR team tried to put a positive spin on the visit, saying it "really cleared the air" between the two countries. But influential former Saudi Intelligence Chief Prince Turki Al-Faisal disagreed, telling CNN that there is going to have to be "a recalibration of our relationship with America."

I happen to agree with Prince Faisal. We are long overdue for a recalibration of our relationship. While I do not believe we have any business telling the Saudis how to run their country, the decades-long special arrangement must come to an end. No more U.S.-taxpayer subsidized arms deals to a Saudi Arabia that slaughters civilians in Yemen, transfers weapons to ISIS and other Islamist extremists in Syria and elsewhere, beheads its own citizens for minor offenses, finances terrorism overseas, and threatens other countries in the region. It should be known that no longer will the U.S. guarantee the security of the Saudi kingdom.

If the Saudis refuse to sell us their oil in protest, there are other producers who would be happy to step in. The Iranians have long been prevented from selling their oil on the world market. If the Saudi government was involved in the 9/11 attacks, it should enjoy no immunity from justice. If that means reciprocal moves from other countries against the harm U.S. foreign policy causes overseas, so be it.