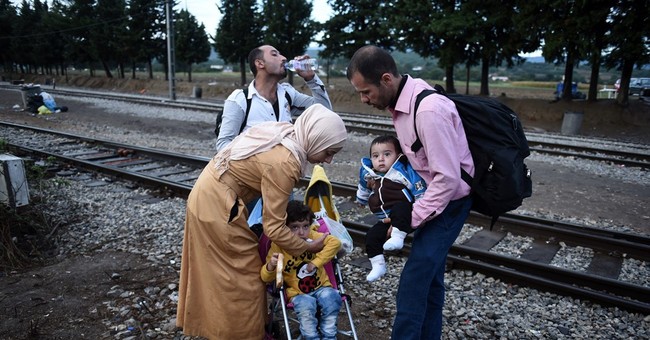 Is the current refugee crisis gripping the European Union "all America's fault"? That is how my critique of U.S. foreign policy was characterized in a recent interview on the Fox Business Channel. I do not blame the host for making this claim, but I think it is important to clarify the point.

It has become common to discount any criticism of U.S. foreign policy as "blaming America first." It is a convenient way of avoiding a real discussion. If aggressive U.S. policy in the Middle East - for example in Iraq - results in the creation of terrorist organizations like al-Qaeda in Iraq, is pointing out the unintended consequences of bad policy blaming America? Is it "blaming America" to point out that blowback - like we saw on 9/11 - can be the result of unwise U.S. foreign policy actions like stationing U.S. troops in Saudi Arabia?

In the Fox interview I pointed out that the current refugee crisis is largely caused by bad U.S. foreign policy actions. The U.S. government decides on regime change for a particular country - in this case, Syria - destabilizes the government, causes social chaos, and destroys the economy, and we are supposed to be surprised that so many people are desperate to leave? Is pointing this out blaming America, or is it blaming that part of the U.S. government that makes such foolish policies?

Accusing those who criticize U.S. foreign policy of "blaming America" is pretty selective, however. Such accusations are never leveled at those who criticize a U.S. pullback. For example, most neocons argue that the current crisis in Iraq is all Obama's fault for pulling U.S. troops out of the country. Are they "blaming America first" for the mess? No one ever says that. Just like they never explain why the troops were removed from Iraq: the U.S. demanded complete immunity for troops and contractors and the Iraqi government refused.

Iraq was not a stable country when the U.S. withdrew its troops anyway. As soon as the U.S. stopped paying the Sunnis not to attack the Iraqi government, they started attacking the Iraqi government. Why? Because the U.S. attack on Iraq led to a government that was closely allied to Iran and the Sunnis could not live with that! It was not the U.S. withdrawal from Iraq that created the current instability but the invasion. The same is true with U.S. regime change policy toward Syria. How many Syrians were streaming out of Syria before U.S. support for Islamist rebels there made the country unlivable? Is pointing out this consequence of bad U.S. policy also blaming America first?

Last year I was asked by another Fox program whether I was not "blaming America" when I criticized the increasingly confrontational U.S. stand toward Russia. Here's how I put it then:

"I don't blame America. I am America, you are America. I don't blame you. I blame bad policy. I blame the interventionists. I blame the neoconservatives who preach this stuff, who believe in it like a religion -- that they have to promote American goodness even if you have to bomb and kill people."

In short, I don't blame America; I blame neocons.

At Signing Ceremony to Make Juneteenth Federal Holiday, Biden Claims Voting Rights 'Under Attack'
Rebecca Downs
Is Joe Manchin's Influence Waning?
Rebecca Downs
Thousands Flood ATF With Comments Over Rule Change That Could Land Millions of Americans in Legal Trouble
Matt Vespa
Church-Going Catholics Know What Too Many Do Not: Why Pro-Abortion Politicians Should Not Receive Communion