Rob Natelson
|
Posted: Jan 07, 2021 11:29 AM
Share   Tweet
The opinions expressed by columnists are their own and do not necessarily represent the views of Townhall.com. 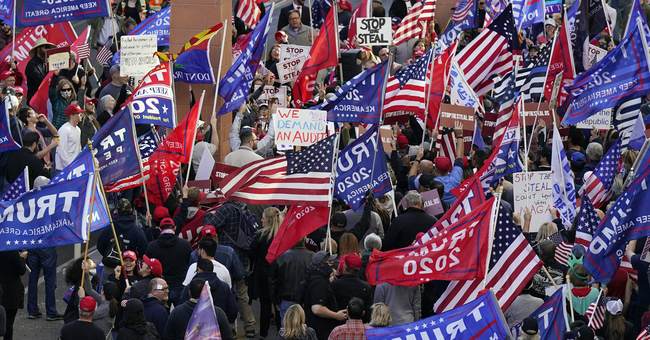 Why is the oligarchy and its media stooges so upset about the storming of the Capitol yesterday? Why, for example, is Rep. Ilhan Omar (D.-Minn.) talking about impeaching an outgoing president who actually tried to discourage violence? Why are Twitter and Facebook “cancelling” him?

After all, weren’t the hundreds of thousands demonstrating in President Trump’s favor “mostly peaceful?” Isn’t it true that only a tiny fraction acted illegally?

Or is this just the Left’s excuse to crack down? As their mentor Saul Alinsky wrote, “The real action is in the reaction of the opposition.” Provoke a reaction and then, as he prescribed, use it to “react to your advantage.”

Or is it also because for a few brief moments, figuratively or literally, the oligarchy and its stooges felt directed at them the kind of assault that leftist thugs have inflicted over the last year on the rest of us? The assault on our businesses, our property, our monuments and culture, our jobs, our freedom, sometimes our lives, and on our democratic institutions.

Of course I condemn the violence at the Capitol, even though many on the Left still refuse to condemn the Antifa and BLM thugs.

But let’s put some perspective on Wednesday’s events. Let’s review some events over my long adult lifetime.

I remember the Watts riots of 1968, which went on for five days, left 34 dead, 1,032 injured, and $40 million worth of property destroyed. Many on the Left excused them as the product of justifiable rage. I remember how “New Left” activists provoked the Chicago riots the same year.

I vividly recall how, during the 1960s and ‘70s, my college and law school education was disrupted repeatedly by campus upheavals organized by leftist thugs—only to hear many in the elite lionize those thugs as “the best generation ever.”

I remember the violent street demonstrations during the 1970s and 1980s. The Left provoked those, too. Why? Outrage that America would dare to defend herself against Soviet missiles by building up her own arsenal.

There were the Seattle riots of 1999. The modern cancel culture and campus thuggery of the “woke” crowd. The trashy “women’s” and BLM marches. And most recently, the BLM-Antifa street violence, which seemingly followed the 1920s Nazi playbook, right down to the martyrization of petty criminals ala Horst Wessel.

Yes, I know there also have been illegal actions by white supremacist jerks. But since the end of state-enforced segregation, they have been comparatively rare and on a much smaller scale. During my adult lifetime, overwhelmingly and almost uniformly, the violence and intimidation has come from the Left.

And that doesn’t begin to tally up the damage they do when they obtain the levers of government power.

Over the same time period, demonstrations by conservatives and Republicans have been quite different. While socialists and their kin were desecrating monuments, public buildings, and private property, intimidating the innocent, and leaving mounds of trash for others to pick up, Tea Party demonstrators were assembling peacefully and cleaning up after themselves before they went home. But that didn’t stop the oligarchy and its media stooges from demonizing them and accusing them of wrongdoing of which they were entirely innocent.

Tea Party people also had to deal with agents provocateurs: leftists who would try to discredit them by infiltrating their rallies, carrying racist signs and engaging in other objectionable conduct.

Which raises this question: Was the Capitol incident ignited by agent provocateurs? I don’t know. But in view of the history, it’s a question worth investigating.