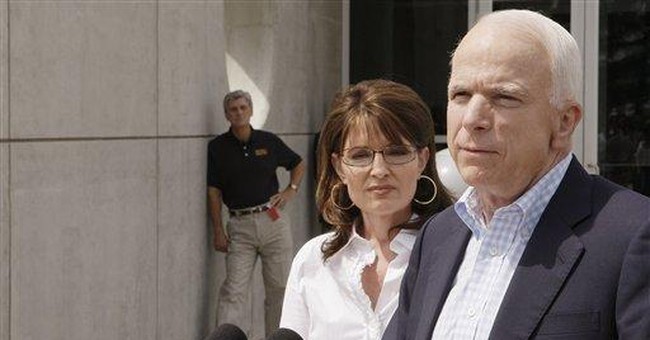 WASHINGTON, D.C. -- Partisan Democrats and many members of the news media consider John McCain's choice of Alaska Gov. Sarah Palin as his running mate a terrible mistake. But McCain need not worry about their criticism. His unexpected selection satisfied the people he needed to please. Republican conservatives assembling in St. Paul for the party's national convention were described as "ecstatic" over the choice.

That is not only because Palin appears to be an outstanding candidate, but also because McCain in his first test as party leader came through with a unique and responsible decision.

The party faithful had feared the worst, in view of McCain's long record as a maverick Republican who enjoyed violating Republican dogma. As recently as two weeks before Palin's selection, McCain's closest aides feared, in the words of one of them, "McCain would be McCain," by choosing liberal independent Sen. Joseph Lieberman, which would have deflated the convention and indeed the party on the eve of an uphill race for the presidency.

But on this occasion, McCain made a politically ingenious selection. Whether the presence on the Republican ticket of a woman for the first time actually will attract disaffected Hillary Clinton supporters is doubtful.

Gender politics aside, she is an ideal running mate. On the one hand, she shares McCain's loathing for earmarks, which are ingrained in the corruption-tainted politics of Alaska. She also has a good record in fighting off big oil, which plays a major role in the politics of Alaska. Her election as governor broke the hold of the Republican "Alaska gang," whose senior members have been under criminal investigation.

On the other hand, she meets conservative requirements as an opponent of abortion and member of the National Rifle Association. That is much more than most people in St. Paul were hoping for.

Ironically, Democrats have been using the inexperience claim repeatedly thrown against Barack Obama in welcoming her to national politics.

Democrats dream about her stumbling in a vice presidential debate with Sen. Joseph Biden, chairman of the Senate Foreign Relations Committee. What cannot be measured is the impact on voters of a new, attractive and well-spoken woman.

Republican presidential nominees starting with Jerry Ford in 1976 have been thinking about a female running mate, but none has had the nerve to pull the trigger until McCain on Friday. He came through when his fellow Republicans feared the worst from him.

The announcement Monday that Gov. Palin's 17-year-old unmarried daughter was pregnant but would raise the child and marry the father did not perceptibly diminish the enthusiasm for her in St. Paul by Republicans, who regarded the news as irrelevant to the vice presidential selection.