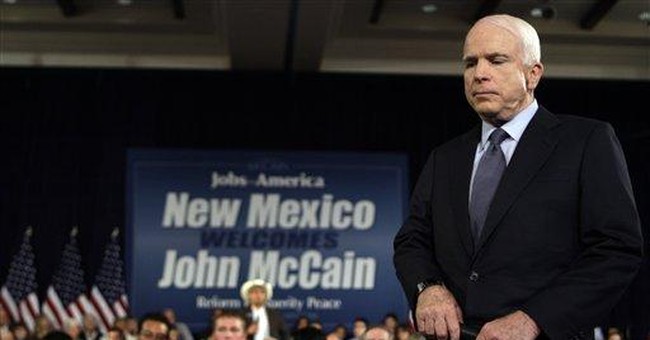 WASHINGTON, D.C. -- Sen. Barack Obama has been meeting secretly with heavy industry CEOs in Washington to discuss issues that he would face as president.

On the campaign trail, Obama has been highly critical of corporate executives and promised them nothing but tougher regulation and higher taxes. But the unannounced, small evening sessions with them since he clinched the Democratic nomination have been non-confrontational and cordial.

Obama scheduled the meetings without any hopes of winning the captains of industry over from Sen. John McCain, but to show them they would be able to do business with him in the White House and that the president's door would be open to the corporate leaders. Their consensus was that he has largely succeeded in that purpose.

After Sen. John McCain publicly repudiated his close friend and adviser Phil Gramm's comments about a "nation of whiners" and a "mental recession," the two old political comrades patched up their relationship.

Gramm apologized to McCain for his remarks that gave Democrats an opening against the Republican presidential candidate and provided several days of ammunition for blogs, cable television and radio talk shows. McCain told Gramm not to worry about the expected pitfalls of a campaign surrogate. Gramm will continue as an adviser and surrogate.

Gramm remained a steadfast supporter last year when it appeared that McCain's campaign had collapsed. McCain was a loyal backer of Gramm's failed 1988 campaign for president and did not leave until the candidate dropped out of the race.

The 74-year-old Grassley once was considered the leader of the Iowa Republican Party's conservative wing but has been at odds with increasingly influential evangelical elements in the party.

Republican strategists now are privately conceding that the GOP could lose Georgia's 15 presidential electors for the first time since 1992 because of Bob Barr's ballot position as the Libertarian Party presidential candidate.

The most recent Georgia survey by the polling firm InsiderAdvantage, conducted July 2, shows 46 percent for Sen. John McCain, 44 percent for Sen. Barack Obama and 4 percent for Barr. George W. Bush, who carried all 11 states of the old Confederacy in both 2000 and 2004, had 58 percent of Georgia's vote in the last election.

Third party presidential candidates almost always run more poorly in the actual election than their showing in the polls, but Barr as a former Republican congressman from Georgia might sustain support in his home state. He already has slipped a little in Georgia, based on his 5.6 percent standing in the June 19 InsiderAdvantage poll, when McCain had a lead of 1.6 percentage points.

Senate Majority Leader Harry Reid is threatening to hold the Senate in session over the weekend of July 25 to consider spending bills held up by the objection of Republican Sen. Tom Coburn instead of being set loose early for the election campaign, as Reid has promised.

Reid would bundle together anywhere from 40 to 80 bills objected to by Coburn. Such a "Coburn omnibus bill" on the floor might provoke an extended debate for several days.

A footnote: Although Reid has told reporters that there is no use trying to talk to Coburn, they have been negotiating with each other in an effort to reach a unanimous consent agreement.