How Not to Run for VP 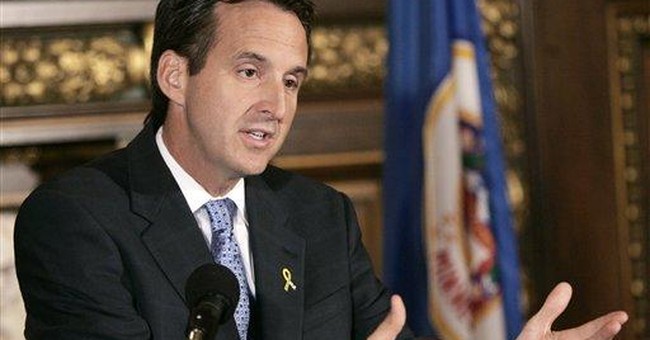 WASHINGTON, D.C. -- Minnesota's Republican Gov. Tim Pawlenty carefully prepared his plan for controlling greenhouse gas emissions to present it at the annual Washington winter meeting of governors. That effort coincided with Pawlenty's fast-rising prospects to become Sen. John McCain's choice for vice president. But behind closed doors, his fellow governors from energy-producing states complained so vigorously that the scheme was buried.

Pawlenty's position as chairman of the National Governors Association (NGA) may prove his undoing. While party insiders sing his praises as ideal to be McCain's running mate, leading conservative Republican governors have been less than pleased with him. Pawlenty has collaborated with the NGA vice chairman, Pennsylvania Gov. Edward G. Rendell, in a fat economic stimulus package, as well as the energy proposal.

Hours after Pawlenty's energy plan was derailed, McCain himself was urged in private by GOP governors not to appear to be anti-coal or anti-oil. The upshot of a busy Saturday at the J.W. Marriott Hotel in downtown Washington was that Pawlenty came over as somebody considerably different from what McCain needs to calm conservatives. He left the nation's capital as a less attractive vice presidential possibility than he was when he arrived.

The 47-year-old Pawlenty long has been talked about as a good fit for the 71-year-old McCain. He is the most conservative Minnesota governor since Theodore (Tightwad Ted) Christianson in 1925. Elected for two terms (albeit narrowly) in a slightly blue state, Pawlenty is seen by supporters as a plus for McCain in the Democratic upper Midwest if added to the ticket. He gets high grades from conservative fanciers of Republican horse flesh, such as Karl Rove, Ken Mehlman and fellow Minnesotan Vin Weber. Anti-tax activist Grover Norquist approves of Pawlenty's record, save for one cigarette tax hike. The censorious Cato Institute graded him "C" for fiscal responsibility in his first term (compared with "F" for Mike Huckabee of Arkansas).

Pawlenty has largely avoided the fate of Republicans who are elected governor on a conservative platform and then in office fall prey to spending projects and concomitant tax increases. But he has become entwined in the NGA's buddy system by serving as its chairman. That allied him with Rendell and put him at odds with conservative Republican colleagues. Govs. Haley Barbour of Mississippi, Mitch Daniels of Indiana and Mark Sanford of South Carolina were not happy when Pawlenty and Rendell presented an NGA-sponsored sweetening of the Bush administration's stimulus package by $6 billion in federal Medicaid funding and $6 billion in a flexible block grant.

As co-chairman of the NGA's energy committee (with Kansas Gov. Kathleen Sebelius, Democratic responder to President Bush's State of the Union Address), Pawlenty proposed statewide goals of reduced CO2 emissions. But at a "governors only" session opening the NGA meeting last Saturday, Pawlenty encountered adamant opposition. Barbour led the way for governors from energy-producing states, including Republican Rick Perry of Texas and Democrat Steve Beshear of Kentucky. The issue of greenhouse gases was "set aside," Pawlenty told me, "because we realized there was no consensus."

McCain, who has co-sponsored a global warming bill with his friend and supporter Independent Democratic Sen. Joseph Lieberman, got more of the same over dinner with Republican governors that night. They made clear that energy was a major issue and that they hoped McCain would be sensitive to energy producers. By all accounts, the prospective presidential nominee was receptive.

On that same Saturday, The Wall Street Journal ran an essay by Minneapolis-St. Paul talk show host Jason Lewis critiquing Pawlenty's record -- including renewable energy mandates -- as too liberal for him to be McCain's vice president. "If you look at my record as a whole," Pawlenty told me the next day, "I would be astonished if I was not considered conservative." As for Lewis, "He doesn't think I'm conservative because I'm a proponent of clean energy, and, from my standpoint, we've got a national security issue."

"We loved Ronald Reagan, but he made some compromises along the way," Pawlenty said, adding, "We don't have a big enough party to be throwing people overboard." Presumably, that also means coal and oil interests.