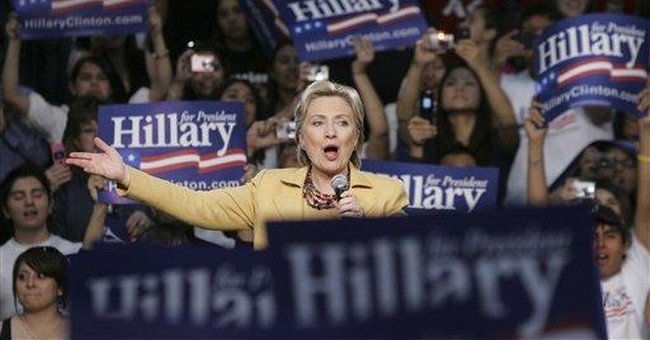 WASHINGTON, D.C. -- Strategists for Sen. Hillary Clinton's presidential campaign believe it is imperative to identify her high-flying opponent, Sen. Barack Obama, with the "McGovern wing" of the Democratic Party -- but they want to keep their candidate's fingerprints off the attack.

During the two weeks remaining before the important Ohio and Texas primaries on March 4, Clinton insiders want to spread the message that Obama represents the radical left-wing politics of George McGovern's 1972 candidacy, which won only one state. But they don't know how to accomplish this. When Clinton herself has launched past attacks on Obama, it has hurt her with voters.

The Clinton campaign is confident of winning in Texas because of the state's Hispanic vote. But it sees the need in Ohio to identify Obama as a leftist in the eyes of lower-income white voters, who often have supported Republican candidates against Democratic opponents they consider too liberal.

Hispanic voters have been the element in the Democratic coalition that has proved most resistant to Obama and faithful to Clinton. They were most responsible for Clinton's win in the Feb. 5 California primary, where non-Hispanic Caucasians broke evenly.

A footnote: The endorsement of Obama Wednesday by Puerto Rico Gov. Anibal Acevedo Vila gives him a big edge in the island commonwealth's primary June 7, despite a predominant Hispanic population, with 63 delegates at stake. The governor will put the Popular Democratic Party, Puerto Rico's most powerful political force, at Obama's disposal.

Insiders close to Sen. John McCain's presidential campaign have put out the word that there is absolutely no chance that his last remaining major opponent for the Republican presidential nomination, former Arkansas Gov. Mike Huckabee, will become McCain's vice presidential running mate. McCain personally likes Huckabee, and McCain's campaign has not wanted to antagonize Huckabee's evangelical supporters, whose backing will be needed in the general election. But McCain's close advisers reject a place on the ticket for Huckabee, who is unacceptable to economic conservatives.

The immediate problem that Huckabee poses for McCain strategists is how to get him out of the presidential race without offending him. While Huckabee cannot possibly get enough delegates to be nominated, he worries the McCain camp by threatening to win an occasional state, as he did recently in Kansas. Huckabee attempted to upset McCain in Virginia, though McCain wound up winning the primary there by a comfortable nine points.

Republican lobbyists and other campaign contributors were surprised this week to receive a $1,000-a-ticket invitation to join California Gov. Arnold Schwarzenegger at the Capitol Hill Club in Washington Feb. 25 for a morning fund-raiser in behalf of Rep. C.W. (Bill) Young of Florida.

A California governor raising money in Washington for a Florida congressman is highly unusual. As a senior member and former chairman of the House Appropriations Committee, Young influences spending important to California.

Young is a close ally of another Californian, Rep. Jerry Lewis, who succeeded Young as chairman and is now ranking minority member of the Appropriations Committee.

The annual payback dinner by defense contractors who benefit from earmarks by Democratic Rep. John Murtha, chairman of the House Defense Appropriations Subcommittee, will be held Feb. 27 at the Ritz-Carlton Pentagon City in Virginia, across the Potomac from Washington.

Murtha, a close adviser of Speaker Nancy Pelosi, is one of the leading earmarkers in Congress. The earmark recipients will be paying the $1,500 a person admission to "An Evening with Jack and Joyce Murtha."

Although the dinner is timed to coincide with the anniversary of Murtha's first special election to Congress in 1974, invitations for it were mailed just before the annual deadline for earmark applications.