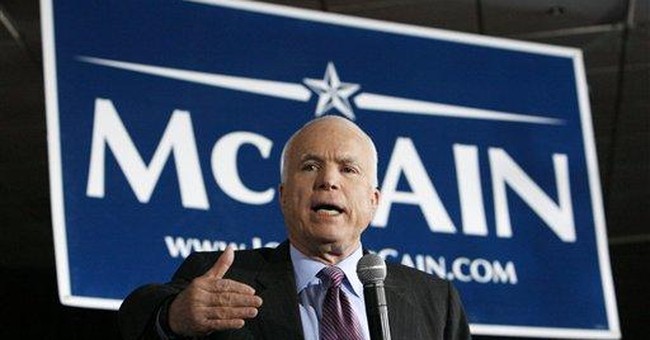 WASHINGTON, D.C. -- Two days before his decisive victory in New Hampshire, John McCain was asked by Tim Russert on NBC's "Meet the Press": "Do you believe that voting against the Bush tax cuts was a mistake?" Sen. McCain replied quickly, "Of course not." He next said I was wrong when I wrote, "McCain has admitted to me that those tax votes were a mistake." In fact, what he actually told me amounted to admitting error.

Thus has McCain, campaigning now as he did in 2000 as the "straight talk" candidate, made trouble for himself by taking a circuitous position on taxes. While he favors making permanent the Bush tax cuts, he defends twice voting against them. The old war hero is stubborn, reluctant to admit either error or defeat.

In my Dec. 27 column that projected McCain as the last man standing for the Republican presidential nomination after being given up for dead, I wrote that McCain "has admitted to me" that his anti-tax-cut votes in 2001 and 2003 were a mistake. When Russert cited that column to McCain on Sunday, Jan. 5, the senator replied in a dismissive tone: "I can't account for Bob Novak's comments or anybody else's comments. I know what I've said on the record thousands of times."

I caught up with McCain for a moment later that Sunday after a town meeting in Salem, N.H. I told him I based what I wrote on what he told me over breakfast in the Senators' Dining Room in Washington on Jan. 31, 2007. I said all reporters make mistakes, and I would check my transcript of our conversation when I returned to Washington and then set the matter straight.

He was cordial to me as always, in contrast to his demeanor on "Meet the Press." He told me not to bother about a correction: "I may have misspoke to you, but I've expressed my view many times."

In contesting for the 2000 nomination, McCain sounded more like Teddy Kennedy than Jack Kemp by decrying Bush's "tax relief" for "the richest 1 percent in America." That attracted independents and even Democrats, but not enough Republican voters to catch Bush. Nearly a year ago when I breakfasted with McCain, he was -- albeit temporarily -- the Republican establishment's choice to lead a party in which tax reduction is an immutable article of faith.

McCain told me: "I may have changed some of my views. You learn over 24 years." Explaining then as he does not now that he opposed Bush's tax cuts because there was "no commensurate restraint in spending," he said, "I am glad the tax cuts had the effect they did." Why he did not leave it at that goes to the nature of John McCain that makes him both frustrating and magnetic.

So, did McCain regret his "no" votes? He replied, "I can't tell you that I cast exactly right votes over the years." Based on more than half a century talking to politicians, I took that as a "yes." He also advocates making the tax cuts permanent because letting them lapse would constitute a tax increase that he opposes.

Shortly after New Hampshire voted, a national leader of the Democratic Party telephoned me. Asking that our conversation remain confidential, he said he considers McCain the only electable Republican in what looms as a Democratic 2008 and indeed capable of defeating either Hillary Clinton or Barack Obama. But, this Democrat asks, how can McCain explain and defend his votes against tax cuts that the Republican president and Republicans in Congress are trying to make permanent?

The answer to that would be for McCain to publicly repeat what he had told me over breakfast a year ago. But that probably would not be John McCain.