Robert Knight
|
Posted: Jul 07, 2020 12:01 AM
Share   Tweet
The opinions expressed by columnists are their own and do not necessarily represent the views of Townhall.com. 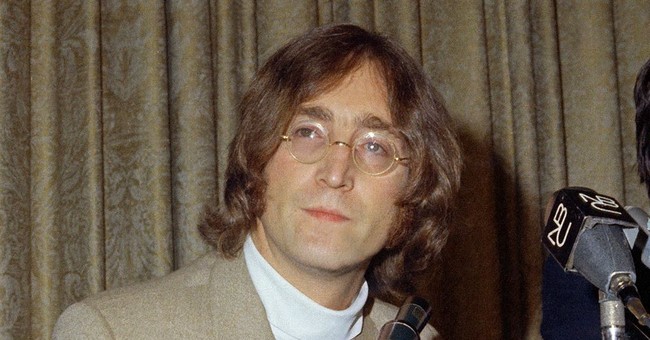 It's easy if you try

No Hell below us

During the Vietnam War, former Beatle John Lennon penned an ode to atheism that is annoyingly catchy and still ubiquitous.

You can hear “Imagine” while walking down a grocery aisle, over the radio, or, as has been the custom since 2005, in New York City just before the ball drops in Times Square on New Year’s Eve.

One leftwing activist, Kevin Powell, wants to replace the “Star-Spangled Banner” with “Imagine” as our national anthem.  He made the suggestion after rioters in San Francisco toppled a statue of Francis Scott Key.

It isn't hard to do

Nothing to kill or die for

And no religion too

We don’t have to imagine what life would be without hope in Heaven, a nation of laws to secure life, civil rights and property, or faith in God to keep people from worshiping the state, themselves or other idols.

It would be Hell.  Psalm 2 begins by asking, “Why do the nations rage and the people plot a vain thing?”

it’s been in front of us ever since protests of George Floyd’s killing on May 25 morphed into a violent revolution and societal cleansing worthy of Mao’s Cultural Revolution.

I wonder if you can

No need for greed or hunger

A brotherhood of man

In Seattle’s downtown, we saw a government-supported experiment in madness, triggered by the “Imagine” mentality and exploited by ruthless Marxists.

On June 8, they created an “autonomous” zone eventually called CHOP (Capitol Hill Organized Protest), and expelled the police.  The hapless residents had none of the safeguards we take for granted in a free republic, such as courts of law, rules of evidence, trial by jury of one’s peers, sanctions for intimidating witnesses, or the freedoms of speech, religion and press. Anyone not toeing the Black Lives Matter line was assaulted and silenced.

This was an urban version of “Lord of the Flies,” with rapes, robberies, looting, businesses destroyed, beatings and shootings. The police were ordered to stay out as Democrat Mayor Jenny Durkan joked about this being the “Summer of Love.” Two black teenagers were slain, one of whom was only 16.

It was only after her own house was spray painted and the 16-year-old was gunned down that she “woke” to the cost of anarchy and ordered police back to secure the area this past Wednesday. By then, crime had soared 525 percent over the same period last year.

Likewise, in progressive Minneapolis, where mobs burned a police station and rioted for weeks after Mr. Floyd’s death, the city council voted unanimously to dissolve the police department. Three council members obtained private security at a cost of $4,500 to the taxpayers whom they had left to the mob’s mercies.

So it goes in Democrat-run cities, where police are maligned and defunded, crime is skyrocketing, and Black Lives Matter (BLM) has become a quasi-religion.

Gotham used to be one of the safest big cities following the Giuliani administration’s adoption of “broken windows” policing of even minor offenses. Not anymore, with 500 shootings since the New Year, including 55 last week alone.

In Chicago, more than a dozen people, nearly all black, were murdered every weekend in June. At least 541 people were shot, more than double the number in June 2019.

To Black Lives Matter and Antifa, we can live in peace all right – so long as we genuflect to them, acquiesce in our history being torn down, and watch as countless public figures and institutions parrot their libel of a uniquely evil America.

You may say I'm a dreamer

But I'm not the only one

I hope someday you'll join us

and the world will live as one

In his later years, even John Lennon may have reassessed the foolish sentiments in “Imagine.”

In his last interview, published in 1981, he said, “I'm a most religious fellow. I was brought up a Christian and I only now understand some of the things that Christ was saying in those parables. Because people got hooked on the teacher and missed the message.”

Close, but no cigar.  Jesus IS the message. He said, “I am the way, the truth and the life.”

Still, it’s intriguing to consider an older, wiser Lennon.  His personal assistant, Fred Seaman, recalled that Lennon “was a very different person back in 1979 and 80 than he'd been when he wrote ‘Imagine.’ By 1979 he looked back on that guy and was embarrassed by that guy's naivete."

Mr. Seaman told filmmaker Seth Swirsky in “Beatles Stories” (2011), that, "John basically made it very clear that if he were an American, he would vote for Reagan because he was really sour on Jimmy Carter."

If he were alive today, would Mr. Lennon be appalled by the violence and communist kleptocrats and vote to Keep America Great?

We can only imagine.