The Old Vote Scam in the Mountains

Robert Knight
|
Posted: Sep 12, 2017 12:01 AM
Share   Tweet
The opinions expressed by columnists are their own and do not necessarily represent the views of Townhall.com. 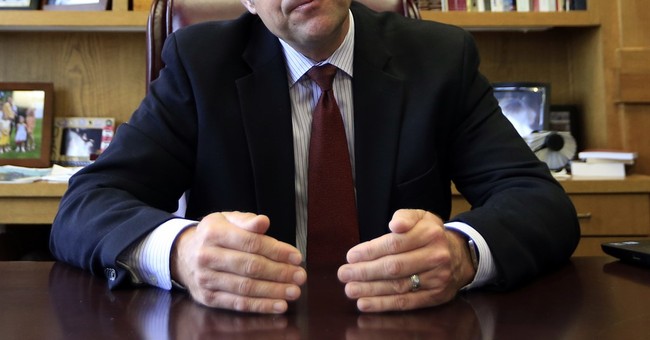 Here are some connect-the-dot facts:

The New Hampshire-Massachusetts border is a mere 40-minute drive for civic-minded progressives in Boston.

The Granite State has same-day registration, which means you can register to vote and then cast a ballot on the same day.

New Hampshire is where the nation’s first presidential primary is held every four years.

In 2014 and 2016, the state attorney general, Democrat Joe Foster, issued a memo to local election officials warning them that they were not to turn away anyone who wanted to vote.

In February 2016, a Project Veritas video sting caught numerous New Hampshire election officials telling people that they could vote in the primary even if they didn’t live in New Hampshire or even intend to live in the state.

This is not a recipe for vote fraud; it’s a fully baked cake.

Donald Trump lost to Hillary Clinton in New Hampshire by 2,736 votes out of 745,000 cast. Republican incumbent Sen. Kelly Ayotte lost her seat to Democrat Maggie Hassan by a mere 1,017 votes out of 739,140 cast. Mr. Trump was ridiculed for insisting that Democrats used illicit votes to steal the election. The evidence suggests he was right.

For years, liberal carpet baggers from Massachusetts, Vermont and Connecticut have flooded into swing state New Hampshire, ostensibly to assist Democratic campaigns. To vote, all they had to do was to declare a “domicile” in the state and an intention to remain there. No proof was needed.

“Voter fraud in New Hampshire has gotten to the point of Lucille Ball in the chocolate factory. And the chocolates are spilling out of the box,” said Coalition of New Hampshire Taxpayers Chairman Ed Naile, who has been tracking vote fraud for 17 years.

“In November, after examining 30 absentee ballots that had been returned in Manchester, we caught a Florida woman who has been voting in Florida since 1998 and has been voting here for the last 10 years.”

In 2000, an election official tipped off Mr. Naile’s group to 22 return envelopes of absentee ballots for out-of-state AmeriCorps workers who had come to New Hampshire in 1996 to “clear trails” but were really there to vote for Bill Clinton. All had claimed the same address – a public park.

Mr. Naile said local officials presented the information to authorities but that nothing was done. So now he has submitted it and other evidence of how poorly New Hampshire elections are run to the Presidential Advisory Commission on Election Integrity, which is meeting on Tuesday (September 12) near Manchester, New Hampshire.

Commission Vice Chairman Kris Kobach, who is Kansas secretary of state, will chair the meeting. This week, Mr. Kobach wrote that the high number of out-of-state voters in November in New Hampshire was “more than enough to swing two very important elections.”

Unsurprisingly, various leftwing groups have announced plans to protest the meeting, conflating its mission of election integrity with “voter suppression” and even “white supremacy.”

On Tuesday, a new state voter ID law takes effect, enacted by the Republican-controlled legislature and signed in July by Gov. Chris Sununu. The statute requires voters who move to the state within 30 days of an election to provide proof that they intend to stay.

The usual suspects whined loudly when it was introduced.

“No widespread voter fraud exists in New Hampshire,” ACLU of New Hampshire Legal Director Gilles Bissonnette claimed with a straight face in a column. “President Trump is wrong. … If there’s a perception of widespread voter fraud, the correct and obvious response is to educate the public that no such fraud exists, rather than succumb to such a lie.”

Wonder how Mr. Bissonnette will spin the news about those 5,526 out-of-state voters who never bothered to get New Hampshire driver’s licenses?

In late August, Hillary Clinton’s campaign attorney, Marc Elias, filed a lawsuit asking a county judge to issue an injunction against New Hampshire’s Voter ID law. The League of Women Voters, the leftwing group masquerading as a nonpartisan charity, is the main plaintiff, along with three individuals.

The lawsuit was joined by the New Hampshire Democratic Party and is backed by Priorities USA, the largest political action committee supporting Clinton's campaign, according to the Washington Free Beacon, which reports that “Priorities received $9.5 million from [George] Soros throughout the 2016 election cycle.”

Loaded with cash, Mr. Elias has been going state to state, filing challenges to voter ID laws in Virginia, Ohio, Wisconsin and North Carolina. The Left is desperate to create optimal conditions for vote fraud. That becomes more obvious with every new lawsuit.

But the facts are catching up with them – and they know it.