Lynch’s Transparent Abuse of the Law

Robert Knight
|
Posted: May 17, 2016 12:01 AM
Share   Tweet
The opinions expressed by columnists are their own and do not necessarily represent the views of Townhall.com. 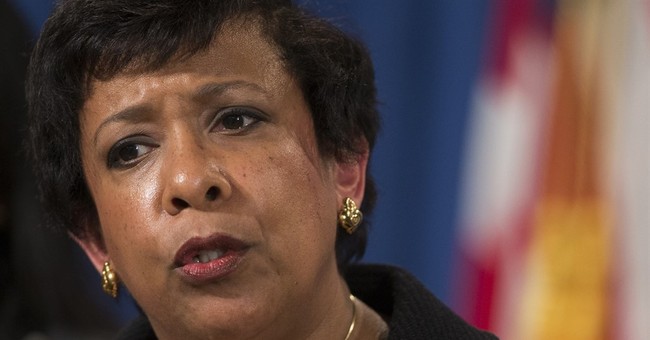 When Loretta Lynch succeeded Eric Holder as U.S. Attorney General a year ago, some harbored the tiniest hope that she wouldn’t be quite as radical.

After all, Holder had done his best to gin up racial resentment, dismiss a clear case of voter intimidation by the New Black Panther Party, attack voter photo ID laws, refuse to enforce the Defense of Marriage Act, threaten a congressman trying to get to the truth of the Fast and Furious Mexican gun-running scandal, and ignore the Internal Revenue Service’s mob-like persecution of conservative groups.

Mr. Holder also managed to sidestep or slow down any action regarding former Secretary of State Hillary Clinton’s private e-mail server, or the massive irregularities of the $2 billion Clinton Foundation, the golden cash cow of open graft by the Clintons and their cronies. Meanwhile, Mr. Holder staffed the Justice Department civil rights division with hard-core leftists, as amply documented in J. Christian Adams’ book Injustice: Exposing the Racial Agenda of the Obama Justice Department.

The partisan corruption under Mr. Holder was so patently obvious that his departure made some folks cautiously optimistic that Ms. Lynch would put “justice” back into the Justice Department.

No such luck. She’s not only buried that hope but driven a monster truck over it.

In February, for example, Lynch’s Justice Department sided with radical groups that sued to overturn requirements for proof of U.S. citizenship to register to vote in Alabama, Arizona, Georgia and Kansas. The DOJ attorneys’ conduct was so outrageous that it drew a rebuke from a federal judge.

Last Tuesday, the Justice Department revealed that it won’t seek the death penalty for terrorist suspect Abu Khattala if he’s convicted of orchestrating the attack on the U.S. consulate in Benghazi on Sept. 11, 2012 that killed four Americans, including U.S. Ambassador to Libya J. Christopher Stevens.

This past week, Ms. Lynch outdid herself, proclaiming that forcing schools and cities to grant transgender males access to girls and women’s restrooms and locker rooms is right up there with the noble claims of the black civil rights movement. Seriously.

So, Ms. Lynch filed a federal civil rights lawsuit against North Carolina and its Republican governor, Pat McCrory. Their offense? Enacting and enforcing a “bathroom” law that requires people to use facilities that match their sex at birth. The state law came in response to the city of Charlotte’s wacky statute opening up all facilities based on feelings rather than objectively defined sex.

Immediately, many corporate America titans like PayPal, General Electric, Pepsi and Dow Chemical joined Hollywood leftist bullies, the NCAA, and even the National Basketball Association in threatening to boycott the state.

Citing the nation’s “founding ideals,” which now apparently include protecting the “right” of certain males to enter women’s restrooms, Ms. Lynch compared their plight to Jim Crow laws and school racial segregation. Anyone opposing the transgender agenda is by her definition a hater and a bigot.

In a joint letter, the federal Departments of Education and Justice sent a warning to every school district in America to begin opening single-sex facilities to all – or else. The silver lining here is that perhaps this smashing bit of insanity will finally wake up the millions of people who mistakenly thought the federal government would just leave them and their children alone.

In a spectacular case of reverse logic, Ms. Lynch said, “None of us can stand by when a state is in the business of legislating identity and insists that a person pretend to be something they are not.”

Say what? Isn’t it the men who are pretending to be women and vice versa who are forcing the issue?

“If there is no more difference between men and women than there is between blacks and whites—as Lynch seems to think—then why not eliminate all single-sex restrooms, locker rooms, and dressing rooms everywhere?” asks Illinois Family Institute writer Laurie Higgins, an astute critic of cultural trends. “Why not allow all men and all women to use the same restrooms, locker rooms, dressing rooms, showers, and shelters? After all, blacks and whites do.”

The answer, of course, is that unlike skin color, the differences between male and female, rooted firmly in biology, including DNA, brain and body structure, are profound and meaningful. The distinction between male and female is at the heart of marriage, family life, morality and social order. For Ms. Lynch to suggest that anyone who recognizes these differences and understands the need for privacy and modesty based on sex is a hateful bigot reveals her own contempt for nature and nature’s God, upon which the legitimacy of our laws rest, as stated in the Declaration of Independence.

Fortunately, Gov. McCrary and the legislature are standing firm, with McCrary and Republican General Assembly leaders filing countersuits in federal court over Lynch’s “baseless and blatant overreach” and “radical reinterpretation” of the Civil Rights Act.

Pundits who dismiss all this as a silly distraction miss the point. This is about far more than bathroom access. Beneath the economic wars, the Left is using this issue as a spear point to test how far the average American can be pushed by government into relinquishing not only our God-given rights but our grasp of reality.

As the nation’s chief law enforcer, Loretta Lynch is putting the weight of the federal government against millions of Americans who just want to maintain some level of decency – and normalcy. God help us.