War on the Police Has Obvious Outcome 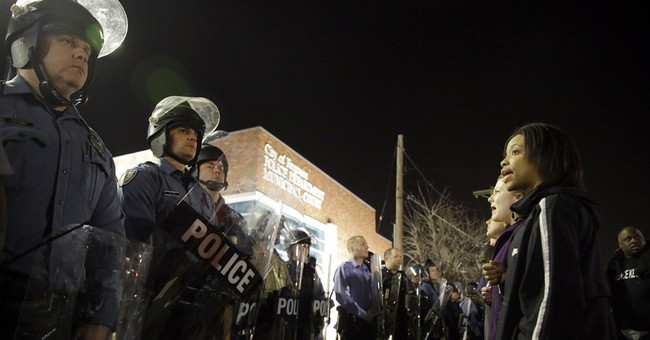 Since the riots over robbery suspect Michael Brown’s death last summer in Ferguson, Missouri, and several other deaths of black suspects, America has been awash in a “dialogue” about police and race.

Here’s the condensed narrative: Cops are bad, perps are oppressed, and crime is the product of racism and underfunded welfare programs. Disagree and you’re a racist.

Stung by an avalanche of bad publicity following the tragic death in police custody of Freddie Gray on April 19, the Baltimore police have retreated, booking half as many suspects as they did last year.

The pullback began during the Gray riots, about which Mayor Stephanie Rawlings-Blake acknowledged giving “those who wished to destroy space to do that.”

A retired officer gave me his take: “You get sworn in to uphold the law. We would never give anyone ‘space’ to ‘destroy.’” Regarding the indictments, he said, “I’m not going to say they all acted perfectly, but this is nothing but riot control, and everyone knows it. Well, the riots are going to be after the acquittals.”

In Cleveland, the Justice Department announced a settlement on May 26. Cops must submit paperwork every time they unholster a gun, whether or not it’s fired. They can’t use neck holds and can use force against someone who is handcuffed only if it is “objectively reasonable and necessary to stop an assault or an escape.” They can’t fire warning shots, and cannot use force against people “who only verbally confront them.”

“Some of that’s reasonable,” my police friend said. “We couldn’t fire warning shots, because you might hit innocent people, or use neck holds. And you should use force only if the guy is a threat. But this stuff about not taking your gun out? Say it’s 2 or 3 in the morning and you’re approaching a vehicle in the dark. Sure you have your gun out, because [suspects] sure don’t keep theirs holstered. I know an officer who got shot right in the face.”

Cleveland Mayor Frank G. Jackson said the rules are “built on the strong foundation of progressive change, sustained trust and accountability.” But Great Society “progress” over the last 50 years has destroyed the black family, turning many urban areas into hellholes.

The settlement came after a white Cleveland officer was acquitted in the fatal shooting of two unarmed blacks in 2012, and follows a Justice Department report in December accusing Cleveland cops of using “excessive force.”

Police are under fire all over the country. The Justice Department is investigating more than 20 departments and has 16 agreements with law enforcement agencies, including consent decrees with Baltimore and eight other cities.

The deaths that sparked outrage are tragic for the families and communities, and there is little doubt that some police can be guilty of abuse and excessive force. But the attacks on police will not make blighted areas any safer. In Baltimore, reducing police presence has emboldened armed criminals and turned residents into inmates in their own homes.

“Between 2011 and 2013, the Grand Rapids Police Department either cited or arrested approximately 560 people for trespassing on business property…,” Mr. Williamson writes. “In a city in which Black people make up roughly 20 percent of the population, 59 percent of those detained for trespassing under this policy were Black.”

Apart from cultural change and policies restoring marriage and families, aggressive policing is the best way to lessen crime, but it’s become problematic in the cop-bashing climate.

Could anyone now blame officers for avoiding scenes that could easily explode, leaving them as poster children for racism and police violence?

“You’re not really risking your career anymore; you’re risking your freedom,” my friend the cop said. “They’re looking to put officers away for life. Citizens need to think about what this means, when police say, ‘I’m in no hurry to get there.’”

As we’re seeing in Baltimore, the thin blue line against chaos can be very thin, indeed.