Slicing Up Christians Via the New Tolerance 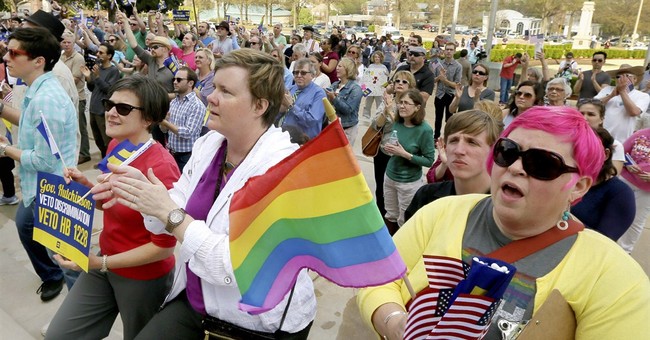 It took a day or two, but the Intolerant Left managed to turn a tiny, Christian family-owned pizza parlor in Indiana into a useful “face of hate.” Nice piece of work, during Holy Week.

It’s part of the Left’s media campaign to terrify anyone even thinking of opposing compulsory celebration of same-sex “marriage,” and it comes amid a fevered debate over Indiana’s joining 18 other states and the federal government this past week with a Religious Freedom Restoration Act (RFRA).

Memories Pizza in Walkerton does not turn away any customers over perceived sexual preference. All are welcome, according to the O’Connor family, which owns Memories. But that’s not good enough. The O’Connors and those like them must be broken to the saddle of sexual anarchy.

Enter a local TV reporter who perhaps noticed the sign with the Bible verse on it and smelled an opportunity. Although the family had not been active in the debate over Indiana’s new law, ABC57 reporter Alyssa Marino said that she “just walked into their shop and asked how they feel.” They’d happily serve gays but wouldn’t cater a gay ceremony? Time to unleash the hounds of hell.

Within hours, the pizzeria was under a vicious assault, with its Facebook and Google Maps pages ruined, its Yelp page commandeered by a gay dating service for hairy men (I’m not making this up) and an explosion of hostile, obscene social media postings and phone calls. Numerous threats followed. A local high school golf coach Tweeted: “Who’s going to Walkerton, IN to burn down #memoriespizza w me?” If she had not been suspended, she would have been a good candidate to head the school “diversity” program.

To the cheers of the mob, the family went into hiding and the pizzeria closed indefinitely only a day later, another scalp on the wall of the New Tolerance. Over in Arkansas, Republican Gov. Asa Hutchinson suddenly refused to sign a similar RFRA law after the CEO of Wal-Mart, based in Bentonville, weighed in with New Tolerance rhetoric. Mr. Hutchison finally signed it Thursday after a “tweak.”

As hysteria in Indiana grew, other corporate bigs piled on. Marc Benioff, CEO of the cloud-computing company SalesForce, issued tweets pouring gasoline on the media-manufactured firestorm: “Today we are canceling all programs that require our customers/employees to travel to Indiana to face discrimination.” The mayors of Portland and Seattle issued similar threats, as did various sports stars and other celebrities. If this reminds you of various liberal mayors bullying Chick-fil-A for its support of man-woman marriage, it should. It’s from the same playbook.

By the way, Mr. Benioff, like many of the corporate leaders bullying Indiana, has no problem doing business in China. Well, why not? Communist authorities are openly hostile to religious freedom.

Pounded by corporate bullies at Anthem, Apple, Angie’s List, Cummins, Eli Lilly, Marriott, Yelp and others, Republican Gov. Mike Pence, who signed Indiana’s RFRA law on Tuesday, beat a hasty retreat, asking the legislature to draft a “fix.” It turned out to be a full-blown gay rights bill that gives the ACLU a huge weapon with which to attack Christian businesses.

Amid cheers from the Left, Mr. Pence signed it. Instead of caving, he should have channeled fellow Republican Gov. Scott Walker, who stood firm in Wisconsin against the scorched-earth tactics of unions and the media over ending mandatory public union dues and later over signing a right-to-work law.

Far from protecting religious freedom, the new Indiana language adds “sexual orientation” and “gender identity” to protected classes, turning it into a battering ram against people of faith. Biblical morality is transformed into a form of actionable bigotry. Some legal commentators, such as former Judge Andrew Napolitano, have suggested that sexual orientation ought to be a covered category under the Civil Rights Act of 1964. But unlike race, sex or place of origin, sexual behavior has moral implications and “orientation” is fluid.

Legally, the claims against Indiana’s RFRA law are absurd. Something entirely absent from the Constitution – sexual behavior – is trumping the First Amendment’s explicit guarantee of religious freedom. This can happen only in a corrupt legal system that has abandoned the Judeo-Christian moral principles that birthed it.

With lawless judges striking down marriage laws and a media-driven hate campaign against people of faith, America is fast turning into a pagan society, where life and marriage are devalued, sex is worshipped, and constitutionally guaranteed religious liberty is flushed down the drain.

Religious freedom advocates may want to explore seriously the concept that forcing people to violate their consciences and equate marriage with same-sex unions is an unconstitutional establishment of pagan religion, and that forcing people to cater to such ceremonies violates the 13th Amendment’s ban of involuntary servitude -- slavery.

There’s a bit of good news. As with Chick-fil-A and Duck Dynasty’s Phil Robertson, people are rallying around the O’Connors. Radio talk show host Dana Loesch raised more than $842,000 online in a few days on their behalf. Angie’s List is getting a major headache from a boycott launched by the American Family Association.

And the mask has come off. Americans who love and appreciate homosexual relatives, friends or co-workers but are clueless about the radical activists’ ultimate goal can finally see what the New Tolerance is all about.