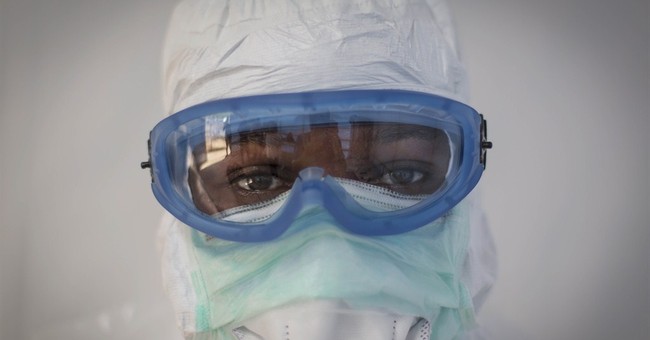 There was little reporting on Ebola during the week before Tuesday’s mid-term election, which turned into a Republican tsunami. I’d like to think that no news is good news.

That, or they did not want it to affect the voting.

The last time we treated a deadly disease as a political problem instead of using time-tested medical precautions, we doomed many hemophiliacs to early deaths, along with hundreds of thousands of homosexual men.

I was thinking about the HIV/AIDS epidemic while perusing the Obama Administration’s latest rationales for rejecting mandatory, 21-day quarantines of health care workers and others coming from Ebola-stricken nations. The Centers for Disease Control (CDC) reports that the incubation period for Ebola is two to 21 days. Why not err on the side of safety?

The similarities are striking. When HIV/AIDS erupted in the early 1980s, activists opposed restrictions on donated blood, claiming that it amounted to “discrimination.” The blood supply was compromised, leading to transfusion-related infections of many, including tennis star Arthur Ashe, and thousands of hemophiliacs, including child victim Ryan White.

A 1995 Academy of Sciences Institute of Medicine report was summarized in USA Today: “Despite mounting evidence that AIDS was spreading among hemophiliacs, the agencies did not act quickly enough to prevent the spread of HIV, hepatitis C and hepatitis B through blood and blood products, the report found.

“By the mid-1980s, about 10,000 hemophiliacs were infected with HIV. Many passed the virus on to their wives, who could then infect their children. About 5,000 people with hemophilia and HIV have died. The result was one of the biggest medical disasters ever.”

Political activism also halted contact tracing and early testing for HIV, which might have saved thousands of lives. Such aggressive responses, we were told, would “drive the epidemic underground.”

So here in 2014, we’re being told that imposing a quarantine on passengers from Ebola-stricken nations would … drive the epidemic underground.

Republican lawmakers have called for a ban on passengers from West Africa who come in on European connecting flights. The Obama administration opposes such a policy. As Washington Post columnist E.J. Dionne helpfully explains, “The administration argued that the ban would encourage people to lie about their travel history, making screening for the disease much harder.” Oh, okay. Let them in and hope for the best.

The administration has imposed a 21-day quarantine on U.S. troops returning from West Africa – but not health care workers directly handling Ebola cases. For them, a voluntary regimen of daily testing is good enough. How does this make sense when more than 400 doctors and nurses in West Africa have contracted Ebola, and more than 230 have died? The only known victims in the U.S. are a Liberian man, Thomas Eric Duncan, who died in Dallas, two nurses who cared for him, and several health care workers who served in West Africa, including Dr. Craig Spencer, who rode New York subways and went bowling just before becoming symptomatic.

Speaking of health care workers, nurse Kaci Hickox could well determine the next set of policies. The 33-year-old was detained for 24 hours at Newark Liberty International Airport on orders from New Jersey Gov. Chris Christie after she showed a fever upon her return from West Africa. After a full-throated, media-empowered protest, she was allowed to travel to her home in Fort Kent, Maine, where Gov. Paul LePage praised her service but invoked a quarantine. She defied it, went on media-covered bike rides with her boyfriend, and is threatening to sue over being in “yet another prison.”

Would it kill her to stay in her own home for another couple of weeks, just to make sure that she gets through the incubation period and can’t possibly spread a disease that devours nearly all of its victims?

The problem is not Ms. Hickox. She’s merely emblematic of the Obama Administration’s politically correct, individualized approach to a potential epidemic.

Americans seem heartened that someone, somewhere had the guts to do what the feds won’t do, similar to Arizona’s and Texas’ doing their best to stop illegal immigration. Many people simply don’t trust the federal government to tell the truth anymore.

It doesn’t help that the CDC took down its own posting about Ebola that included this:

“Although coughing and sneezing are not common symptoms of Ebola, if a symptomatic patient with Ebola coughs or sneezes on someone, and saliva or mucus come into contact with that person’s eyes, nose or mouth, these fluids may transmit the disease.”

The current Q&A on the CDC site emphasizes that, “There is no evidence indicating that Ebola virus is spread by coughing or sneezing. Ebola virus is transmitted through direct contact with the blood or body fluids of a person who is sick with Ebola; the virus is not transmitted through the air (like measles virus). However, droplets (e.g., splashes or sprays) of respiratory or other secretions from a person who is sick with Ebola could be infectious … Ebola on dry surfaces, such as doorknobs and countertops, can survive for several hours.” We’re supposed to take comfort in the fact that the droplets from coughs or sneezes are not infectious until a person becomes symptomatic. Probably.

President Obama accuses people who want a 21-day mandatory quarantine of engaging in the politics of “fear.”

Our ruling elites constantly tell us that common-sense precautions are evidence of hysteria or discrimination. Does anyone feel safer with these people at the helm?