Rock the Vote and Its Designs on the Young 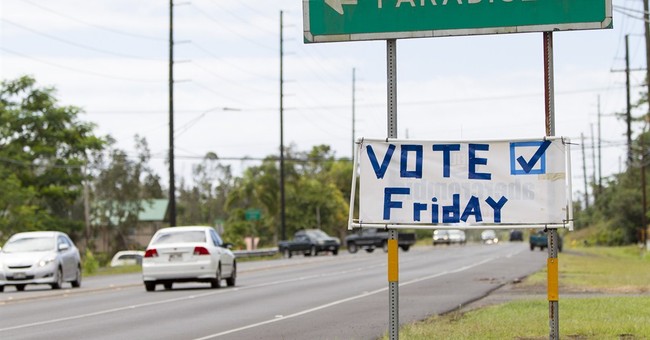 When I was 18, I thought I knew plenty about life and politics.

My views had not yet been honed by the experience of trying to live on a paycheck that the government seized in order to hand much of it over to someone else.

I also believed that people who created the monstrous federal bureaucracy really cared about the poor, even as their wrong-headed policies destroyed marriage and families and plunged urban centers into unimaginable violence.

In short, I was easily manipulated by the welfare state’s emotional appeals, just the sort of sucker that Rock the Vote (RTV) is looking for today.

Before you accuse me of waging a “war on young people,” I readily admit that not everyone my age at the time was naïve, nor are some young people as naïve today – just whole bunches of them.

Facing astronomically high unemployment or under-employment, with the world blowing up around them, the majority of 18- to 29-year-olds still identify as liberals in survey after survey. I’d say “mug them again,” but you can mug people and suffer disappointment only so many times.

Instead, I remain cautiously optimistic that time and reality will steer them toward more conservative views, as it did me and many other former useful idiots. Getting a job and getting married boosts the whole process. Having kids is another huge reality check.

Rock the Vote is gearing up for a repeat of 2008, when millions of teens and twenty-somethings were recruited as shock troops for the Obama campaign. By 2012, RTV claimed that it had registered 5 million new voters under 30.

Founded in 1992 as a “non-partisan” creation, with funding from George Soros and other lefty sugar daddies, RTV has fresh-faced new leadership, such as its president, Ashley Spillane, a veteran of the Atlas Project, whose mission is “to arm the progressive community with historical elections data, sophisticated analysis and real time updates for all 50 states.”

RTV also sports a lengthy roster of celebrities such as Lady Gaga and Sheryl Crow.

The former is on a crusade to overturn the laws of Nature and Nature’s God, and the latter posted this idea online in 2007: “I propose a limitation be put on how many squares of toilet paper can be used in any one sitting."

Yes, she was only joking. Ha. Ha. I’d keep laughing except that some of the Chicken Littles on her side dream of such “climate change” directives if they could only get their little green hands on more power.

One of Rock the Vote’s current quests is to weaken ballot integrity safeguards that protect everyone’s vote – including that of young people. In a July 11 Washington Post column, Ms. Spillane wrote that RTV wants “to expand online registration and same-day registration, institute pre-registration of 16- and 17-year-olds, and broaden opportunities for early voting.” All of these would make vote fraud infinitely easier.

She went on to note that, “[W]e comprise a pivotal voting bloc that is growing stronger every day, despite efforts to silence our voices. Efforts to suppress youth turnout aren’t just unconstitutional—they are un-American.”

Say what? Voter ID laws and other reforms are designed to ensure that voters who cast ballots are in fact who they say they are. This is “un-American?”

Well, yes, if you live in places like Chicago, where it’s considered all-American to vote early and often, even if you aren’t dead.

On June 23, Time magazine reported that, “This year, Rock The Vote plans to register 1.5 million people to vote, including 400,000 young people and 100,000 Latino voters across 15 states with large Latino populations. It is also vowing to closely follow laws that affect the youth vote, such as the proof-of-citizenship laws in Arizona and Kansas that the organization is challenging in court.”

At a “Causathon” in July in Los Angeles, digital whiz kids created 11 projects for nonprofits. For Rock The Vote, the geeks “built a dating app that mirrors the look of existing data app Tinder,” according to the Los Angeles Times. “Users swipe to approve or reject political candidates running for Congress. … the swipe data is then used to match two real users who might actually want to date. To see the match, the users must register to vote.”

Pretty slick. Over on the Republican side, operatives are standing by to release thousands of pigeons that will assist in gathering young people’s voter registration forms. Just kidding. They have nowhere near enough crackers and pellets to pull that off.

As usual, the Left is ahead when it comes to technology. And they have a built-in advantage among the estimated 44 million people in the 18-to-29 age bracket, who as recently as 2004 were evenly split between the two major parties.

Will that advantage hold in this November’s elections and two years’ hence?

Perhaps, but only if young people don’t pay attention to who is stealing their future and loading them with debt in the name of progress.