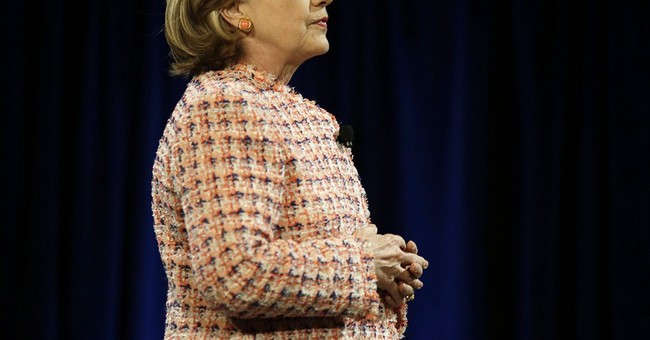 She wasn’t talking about soldiers facing combat, or what police do in showdowns with criminals. Or even what an armed homeowner might ponder for a split second during a break-in.

The former First Lady and former Secretary of State was talking about aborting unborn children, which she regards as merely a “choice,” albeit a “hard” one.

And why is it hard, if the baby is not – against all scientific evidence – a human being?

If the child is not a child, just protoplasm that just happens to be in a mother’s womb, what’s the big deal?

Hillary Clinton has had her thumb on the scale of death for unborn children so long that she probably cannot fathom how absurd her stance is. And given her keenly honed political instincts, which take into account the short attention span of the average American voter, she might well ask, “what, at this point, difference does it make?”

Right after the U.S. Supreme Court recovered a tiny bit of our decaying religious freedom last Monday by ruling that the Christian-owned Hobby Lobby craft store chain does not have to pay for abortion drugs for its employees, Clinton waxed grimly poetic at the uber-trendy Aspen Ideas Festival, where she pushed her memoir, “Hard Choices.”

‘It is a disturbing trend that you see in a lot of societies that are unstable, anti-democratic and, frankly, prone to extremism, where women's bodies are used as the defining and unifying issue to bring together people -- men -- to get them to behave in ways that are disadvantageous to women but prop up rulers.’”

“This is a really bad slippery slope,” she also told interviewer Walter Isaacson, who presumably knows bad slippery slopes from good ones. Skiers pay a small fortune to traverse the latter when God endows Aspen with snow.

“It’s the first time that our court has said that a closely-held corporation has the rights of a person when it comes to religious freedom, which means that the … corporation's employers can impose their religious beliefs on their employees," Mrs. Clinton continued.

Well, the courts have long held that corporations are composed of individuals and therefore have constitutional rights. And although the ruling was limited to closely-held corporations, Mrs. Clinton might want to think more expansively. Her liberal friends at some major corporations have been pushing the quasi-religious culture of death since the 1970s.

Hapless employees have by association aided and abetted Planned Parenthood’s abortion agenda as well as homosexual activism, both of which are anathema to devout Christians and Jews. A number of large corporations have been up to their ears selling hard-core, illegal pornography. The willful embrace of immorality is as clearly a decision with religious significance as is willful adherence to God-given natural law.

Mrs. Clinton has no problem with corporate, religious-inspired activity, providing it reflects the religious sensibilities of the priests of Baal or the rulers of Sodom and Gomorrah.

What about the “bad slippery slope” of an America descending into decadence and moral anarchy? It’s a good bet that, like any thinking leftist, Mrs. Clinton welcomes it. The destruction of marriage and family makes people dependent on government and hence dependent on politicians like her.

Speaking of dependency, what are we to make of tens of thousands of illegal immigrants flooding over the Texas border, followed by planeloads of lawyers sent there by President Obama to ensure that they will not only remain in the United States but quickly become newly minted recipients of taxpayer largesse?

Call me paranoid, but it seems to me that someone, somewhere, has decided that America has had its run as the freest and most prosperous, grounded-in-law nation in history. It’s apparently high time to take us down a peg.

I don’t believe for a minute that President Obama is surprised by any of this, or that he is “in over his head” any more than Hillary Clinton is. Conservatives complain in vain about our ruling elites’ supposed ineptness.

What if, as with Hillary Clinton’s reverential Wellesley dissertation on Marxist community organizer Saul Alinsky, Barack Obama is a true believer of the Left who hates everything that makes America unique? What if he took to heart the leftist bromides from his Muslim father and step-father, his mother, his grandparents in Hawaii and his self-acknowledged mentor, communist writer Frank Marshall Davis?

What if he were schooled in radical politics by his friend, unrepentant Weather Underground terrorist William Ayers, and came to believe that if he ever acquired the power to do so, he would show these spoiled Americans a thing or two?

What else rationally explains five and a half years of ripping apart the Constitution, economic and foreign policy disasters, the government takeover of health care, antipathy towards Israel, a slavish devotion to using government to further sexual anarchy, an open borders policy, and the criminal misuse of the Internal Revenue Service and other federal agencies to try to crush political opponents?

As bad as it has been, we may not have seen the worst.

It’s nothing she won’t fix pronto if she ever gets the chance.