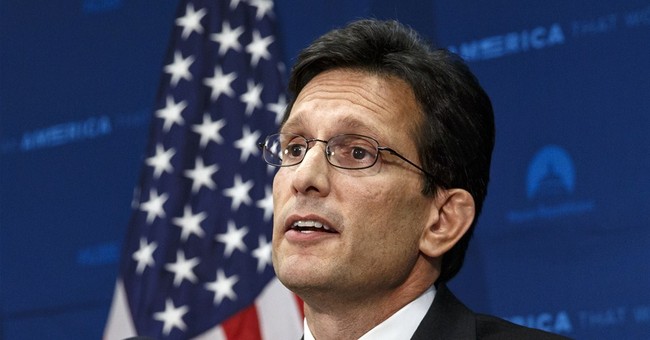 I have one, and it’s about this being bigger than Eric Cantor. First, some history and a prosaic observation: Bigness is sometimes better, but sometimes, it’s not.

Large companies such as Apple, for instance, have the research, capital, distribution and marketing to quickly bring technology to consumers. Once-exotic smart phones are as common as wrist watches. The Internet, our modern Tower of Babel, brings literally trillions of bits of information to us anytime, anywhere. It’s big, big, big.

The downside is the loss of real, in-person socializing, weaker communities and the psychological whiplash of rapid, constant change, which Return to Order author John Horvat II calls “frenetic intemperance,” the driving engine of “giantism.” Bigger. Faster. With giantism comes concentration of power.

The market economy has no peer in delivering goods and liberty. Nothing comes close. But the market itself is amoral; it will serve up pornography and feed other vices as readily as it creates hamburgers and weed whackers. Unlike socialism, the market is self-governing in many ways, but it requires an umpire to make sure players don’t violate fair play and commit criminal acts. As James Madison observed, men are not angels.

To constitutional conservatives, “fair play” means operating with rules that apply to all. To liberals, it means using government to redistribute wealth in a “fair” way, seizing it from taxpayers and transferring it to liberal constituencies to buy votes.

For this to happen, the government had to get very, very big, and grow beyond its constitutional boundaries. Under Franklin D. Roosevelt, the federal government umpire came out from behind the plate and became the biggest player on the field.

Washington’s centralized power has grown to where it threatens our most fundamental liberties. It’s even spying on us now. Who is pushing back?

It’s not just government. With every big corporate merger, I get a little nervous. A large corporation “too big to fail” is a fat target for a government takeover, with taxpayers footing the bailout. Corporations with near-monopoly power, like Facebook, Google and Google-owned YouTube are censoring information they deem politically incorrect. So are other companies.

Oh, I know. Technically, only governments can “censor” speech, but what do you call the sacking of Mozilla Firefox CEO Brendan Eich for merely donating six years ago to a marriage campaign favored by a majority of Californians? I’d call it corporate censorship.

Okay, I’m getting to Mr. Cantor. The average working American in his district looks around and sees big, big problems: an astronomical rise in food stamps and other welfare; the federal debt approaching $18 trillion; persistent high unemployment; out-of-control judges; the Internal Revenue Service going rogue on the tea parties; Obamacare wreaking havoc, and a national media that hectors them constantly for clinging to their guns and religion. In Virginia, they see a lawless governor and attorney general violate their oaths of office by refusing to defend the state marriage law – without any apparent penalty.

They see a lawless, arrogant president who treats the Constitution like an old book of suggestions, not law. They look at our foreign policy and see retreat, defeat and confusion. At our unguarded southern border, they see literally tens of thousands of children pouring over, lured by both major parties’ talk of immigration amnesty. They know this is the tip of an iceberg crashing into our already fragmented culture.

The average American is getting the idea that the ruling elites not only hold them in contempt but are trying to replace them with millions of foreigners who will be cheap labor for big business and a voting bloc for a party that hates the values of average Americans and wants to confiscate even more of their hard earned money.

Mr. Cantor not only flirted with amnesty but also refused to oppose a bill that would empower Attorney General Eric H. Holder Jr. to interfere in state elections nationwide and explicitly deny “nonminorities” protection under the federal Voting Rights Act. Will somebody do something?

Who will get up and voice what many Americans are thinking – that liberty is slipping away while “conservative” politicians make nice?

Mr. Cantor came to Washington in 2001 as a conservative and isn’t really a bad guy. But he morphed into an establishment Republican, which makes him part of the big, big problem.

Thanks to Dr. Brat’s courage and clarity, Mr. Cantor’s constituents let him know this in a big, big way.