Boys and Girls Together or Else, ACLU Tells Schools 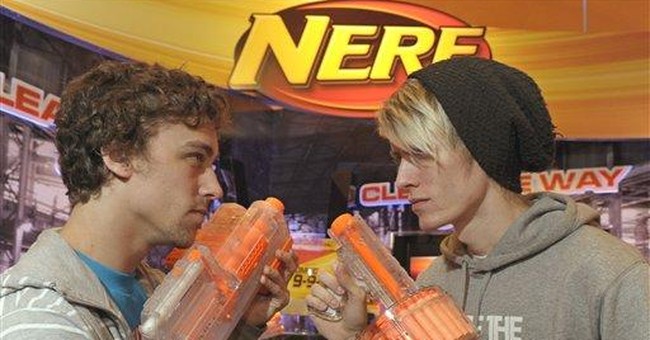 Boys and girls have the same needs, desires and temperaments, according to the American Civil Liberties Union (ACLU).

Any observable disparities can be traced to soft bigotry, such as thinking that boys typically throw better than girls. And that girls’ social radar makes boys by comparison as socially sharp as grass-munching oxen.

So, on May 21, the ACLU launched a nationwide jihad against single-sex education, in which boys and girls are separated into programs designed to enhance each sex’s learning capabilities:

“Today, we are sending demand letters to school districts in Florida, Maine, Virginia, West Virginia, Mississippi, and Alabama insisting that they take steps to end single-sex programs that rely on and promote archaic and harmful sex stereotypes,” the ACLU announced. “And we’re launching a new campaign called Teach Kids, Not Stereotypes to drive the point home.”

The ACLU is also seeking public records from schools in Wisconsin, North Carolina, South Carolina, Washington, Massachusetts, Indiana, Idaho, and Illinois, “so that we can better understand the scope and parameters of the single-sex programs operating in those states.”

If boys in general find it harder to sit still than girls do, it’s the adults’ fault. This is gospel in the nation’s universities, where radical feminists have been waging war on sex differences while at the same time claiming female superiority. No, it does not have to make sense, you hateful bigot.

In the process, they’ve created a stifling atmosphere of political correctness, with courses like Stanford’s “Destroying Dichotomies: Exploring Multiple Sex, Gender & Sexual Identities” that lead to degrees that are worthless outside academia. They’ve also managed to use Title IX to wipe out thousands of men’s college sports teams on the grounds that men and women have identical attraction to sports.

As for the real world, it doesn’t seem to matter that, since the dawn of time, boys have been more aggressive than girls due to testosterone. When hopeful, New Age parents give boys a spatula and apron so they can try being Susie Homemaker, they often are disappointed. The spatula quickly becomes a sword, and the apron a sail for a Viking ship.

In its mad pursuit of sameness in the name of equality, the ACLU dismisses observations made for thousands of years by millions of parents and teachers about differences between boys and girls. In the ACLU’s vision of gender dysphoria, boys can be boys – but only if they’re attracted to other boys. Then, gender distinctions are more than okay. Don’t question this or I’ll call you a bigot again.

How do they get away with this? By insisting that “scientific studies” have not confirmed any appreciable differences between the sexes. Never mind that brain research shows profound, hard-wired distinctions, not to mention more obvious differences, especially after puberty. The Left depends heavily on rigged junk science to persuade the rest of us that common sense and observable reality are untrustworthy and that their crackpot war on norms makes sense.

For the record, you can admire Western women’s achievements and be appalled at insidious sexism, such as Muslim subordination of girls and women, while remaining open to the idea that single-sex education might benefit some boys and girls.

But maybe the ACLU is right. Maybe my son liked baseball, tree houses and blowing up things only because my wife and I encouraged stereotypical behavior. Our meddling also may have triggered my daughter’s interest in dolls, dressing up and behaving in a less macho way than our son. But we should have known better. My daughter’s lack of interest in lighting things on fire or riding the dog like a horse should have tipped us off that we needed to feed our girl more red meat or something. She did like to play catch and run, however, so we’ll have to keep an eye on her.

Most families just want to be left alone, not hounded by public nuisances. But it’s clear that the ever-more perverse ACLU is on a slash and burn mission to wipe out gender differences in education:

“We at the ACLU can’t sit on our hands while public schools teach boys to be active and aggressive – by shouting at them, spanking them, and allowing them to toss a football in class – while they simultaneously coddle girls, using soft voices, encouraging them to talk about their feelings, and giving them untimed tests to create a less stressful environment,” the ACLU declares in a horrified blog post.

No, we certainly wouldn’t want educators to experiment with new ways of teaching in order to turn around the failing public schools.

If they succeeded, where would future liberal voters come from?

We've Discovered the Real Reason the CDC Is Requiring All Kids Wear Masks in Schools
Townhall
Let's all take a moment to appreciate this California restaurant owner calling out Chris Cuomo for staking out COVID19 moral high ground [video]
Twitchy
A.U.D.I.T. of Elections: Shock and Awe or Calm Before the Storm?
Redstate
Right-Wing Twitter Loses Its Mind Over Simone Biles Withdrawing from Competition. Is it Fair?
PJ Media