Robert Holland
|
Posted: Feb 01, 2016 12:44 PM
Share   Tweet
The opinions expressed by columnists are their own and do not necessarily represent the views of Townhall.com. 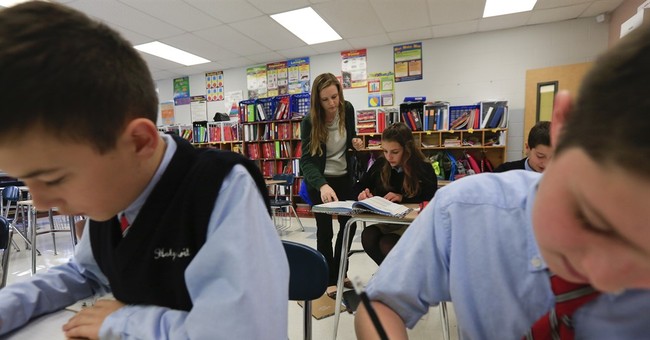 When grassroots parents discovered big-education elitists had kept them in the dark about the Common Core (CC) experiment being conducted on their children, they helped to shine a bright light on the gross deception perpetrated by some educators and government officials who desire to radically transform the way the nation’s children are educated.

These parents skillfully used social media and traditional town hall meetings to expose the ugly foundation underpinning Common Core, thereby turning the tide of public opinion to the extent that two-dozen states now claim to be reviewing Common Core with an eye toward revision or replacing the standards altogether.

Unfortunately, parents now find themselves on the outside peering into this process, as big-education advocates wrap their many tentacles tightly around Common Core in the hopes of preserving this detrimental set of standards. One of those tentacles is called “big data.”

When Kentucky, the first state to adopt Common Core, became the first to initiate a defensive public review in 2014, its Department of Education reported having developed with Academic Benchmarks, Inc. (AB) an online tool to let parents, educators, and others sound off on each and every standard.

With the data collected, Kentucky’s educrats boasted in 2015 88 percent of their respondents gave a big “thumbs up” to Common Core standards and suggested no changes, contrary to public opinion polls showing support for CC below 50 percent.

Several other states, most recently Louisiana, have been using this supposedly unbiased online tool as well, but Academic Benchmarks is not the disinterested party so many have been claiming it is. In fact, there are good reasons for parents and pro-choice education activists to be very concerned about the Cincinnati-headquartered company.

According to an online review by Edmentum, Inc., Academic Benchmarks has “the market’s most comprehensive standards collection maintaining over 3 million domestic and international academic standards including K–12, Career and Technical Education, and early learning.”

Edmentum also says AB is a “premier provider of standards data services, tools, and alignment services for the K-12 education industry. … [It helps the] businesses of education … to meaningfully describe and connect learning objectives, education frameworks, and learning resources to meet district and state compliance requirements.”

Parents, who have the constitutionally protected right to oversee their children’s education, are on their own to connect the dots.

The company’s Twitter handle is @CommonCorner, the place for pithy tracking of Common Core, the Next Generation Science Standards, and the two CC assessment consortia.

A look at instructions for Louisiana’s online review of hundreds of standards shows how parent-unfriendly big data can be. The options given for reviewers are:

1. I agree with the Standard as written. (Comments are optional.)

2. The Standard should be in a different grade level. (Grade selection is required.)

3. The Standard should be broken up into several, more specific Standards. (Suggested rewrite is required.)

4. The Standard should be rewritten. (Suggested rewrite is required.)

5. Delete this Standard. (Comments are required.)

This methodology clearly favors those in AB’s Common Core community who wish to preserve the status quo; it takes only one click to agree, and no comment is required. That lends itself to organized amen choirs. Conversely, those who think the educrats should amend or delete standards must offer extensive rewrites or commentary.

Few parents speak that most arcane of languages, educationese, which makes it difficult for them to lay out an academic standard. In addition, few have the time or subject-matter expertise to rewrite the standards themselves. Much of what parents loathe about Common Core, such as the downgrading of classical literature and the mystification of math, is buried in the appendices, footnotes, and teacher training manuals, not in the standalone standards.

“I am an experienced educator and it took me two hours to comment on just one of the subject areas,” former Louisiana teacher Tiffany Guidry told The Hechinger Report for its January 18 story on the Pelican State’s review process. “They made the process so difficult that it was like you were getting penalized if you wanted to make a change to the standards.”

Big data is only one Common Core tentacle. Among others are “big publishing,” notably Pearson Education, “big foundations,” especially those funded by Bills Gates, “big business,” and of course the supporters of “big government” in both political parties.

These players all have huge investments in Common Core, and they are not going to let it go easily. They will try to rig polls and surveys, change the name, rebrand, stack review committees, set up and fund front groups, and do whatever else it takes to ensure these top-down national standards become mandatory in virtually every corner of the United States.

But Common Core advocates should know grassroots parents are going to sneer at their antics and fight back, good and hard. Only a fool would bet against them eventually winning.