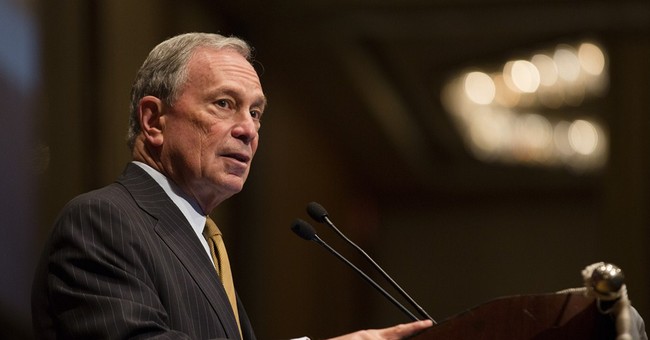 Nanny plutocrat extraordinaire, Mayor Michael Bloomberg, has targeted yet another new windmill for his quixotic conquest besides the scourges of big bad sodas, trans-fats, salt, and elevators. Now he’s going after the Stand Your Ground or No Retreat laws to have them overturned. Hizzonor disparagingly refers to such laws as “Shoot First Laws.”

From Bloomberg’s perspective such laws, “…can inspire dangerous vigilantism and protect those who act recklessly with guns,” adding that they, “…encourage deadly confrontations by enabling people to shoot first and argue ‘justifiable homicide’ later.”

Got that? Apparently, the Mayor of New York City believes that the bad guy in the assault equation is the lawful gun owner.

So let me get this straight, Mr. Mayor: If someone (and let’s pretend that they are a law-abiding citizen just for sake of discussion) is attacked by a mugger on the street and our law-abiding citizen doesn’t turn tail and run away (assuming that option is even physically possible), then the only possible explanation you can imagine of why said mugging victim wouldn’t run away is because they are a reckless vigilante seeking deadly confrontation? Seriously? You honestly think all CCW/CHL license holders are murderous psychopaths? That’s outrageous! Then again, the whole scenario is a moot point for you, since you have a team of armed bodyguards at your side, right?

Dear Gun Owners in New York – do you realize this is what your mayor really thinks of you? And not just you – oh, no, he’s pledged to go to any and all other states with Stand Your Ground (SYG) laws and try and get those laws eliminated, too.

And he’s not alone. Oh, no. Our “Fast and Furious” gun-running Attorney General, Eric Holder, is right there with him in the same boat. At the recent NAACP convention in Florida, Holder vigorously denounced SYG laws. Both Bloomberg and Holder have exploitatively used the recent George Zimmerman trial in Florida as the pretext for their condemnation of SYG laws – apparently oblivious to the fact that SYG was never a factor in that trial.

Even pop celebs are jumping on the anti-SYG bandwagon. Singer Stevie Wonder has vowed never to perform in the State of Florida again until its SYG laws are overturned. What would you bet Stevie has armed bodyguards too? You know Eric Holder has a Secret Service detail.

So, basically, here’s how all these Anti-SYG Crusaders want all of this to work: Mr. Bloomberg, Mr. Holder, Mr. Wonder, and most VIPs have armed security around them day and night. In the event of an attempted assault, the bodyguards would seek to stop the threat by any means necessary, up to an including the use of deadly force. On the other hand, law-abiding Joe Citizen, all by himself, who maybe can’t afford a personal bodyguard, if he’s assaulted should be mandated and obligated by law to run away. But if he doesn’t run away, and makes a split-second life-or-death decision to use deadly force to stop the threat he’s facing, he’s potentially in legal jeopardy of being charged with second degree murder or manslaughter.

Wow. That doesn’t sound fair. Why, they ought to pass a law that protects a citizen’s right to defend themselves without fear of prosecution for having done so. Oh, wait! There are such laws. They’re called Stand Your Ground laws.

Now please bear in mind, the Stand Your Ground concept, or “No duty to retreat,” and closely associated laws known as The Castle Doctrine (which applies to the protection of your life and property when at home), is not a new idea. In 1921, Justice Oliver Wendell Holmes, Jr. declared in Brown v. United States (256 U.S. 335, 343 (16 May 1921)), a case upholding the “No duty to retreat” maxim, Justice Holmes said that, “Detached reflection cannot be demanded in the presence of an uplifted knife.”

Justice Holmes is exactly right. We are human beings, not robots – nor are the vast majority of gun owners professional soldiers or veteran law enforcement personnel accustomed to ever having to shoot a weapon at other human beings. Thus, should any one of us ever be surprised and threatened by a violent assailant, which may very well be a once in a lifetime event, numerous physiological and psychological responses are going to instantly come into play by sheer reflex: an adrenaline surge, increased heart and respiration rates, perhaps a sense of shock and momentary confusion, the flee or fight response, perhaps a powerful sense of fear or anger or panic – and if in the company of a loved one, maybe a spousal/maternal/paternal instinct to protect. Perhaps all of the above. What is patently unjust is any “Monday morning quarterbacks” second-guessing anyone else’s reactions and instincts in an emergency situation that in many instances may take place in a matter of mere seconds.

It’s like the old story of the elderly woman standing before a judge explaining what exactly happened when she shot an intruder breaking into her home. The judge asked her, “Ma’am, I understand why you felt you needed to shoot the intruder, but why did you feel you had to shoot him six times?” To which she calmly replied, “Because the seventh time I pulled the trigger, it just went click.”

Also keep in mind that all episodes of potentially lethal self-defense don’t end in death. Rather, in many documented instances (ref: John Lott’s MORE GUNS, LESS CRIME), merely the sight of a firearm – without a single shot being fired – is often sufficient to motivate a would-be assailant to do the retreating, or perhaps even vigorous fleeing in some cases.

On the other hand, it cannot be assumed in a potentially life-threatening altercation that a law-abiding licensed CCW/CHL holder will always be alone. What if his/her unarmed spouse, children, friend, or other acquaintance is with him/her. Is the armed citizen expected to abandon their loved ones to an attacker and flee when they possess the means to save lives? What kind of heartless monster would require by force of law an armed and properly trained citizen to choose cowardice over valor?

The fundamental problem here is that Mayor Bloomberg and his ilk have seen too many of Charles Bronson’s DEATH WISH movies. Bloomberg’s view of a gun owner, even if lawfully carrying his gun, is one of a twisted caricature of some sociopath prowling the streets looking for trouble, prepared to shoot to death any unsavory characters that dare cross his path – apparently out of bigotry and hate, or for pure sport or personal enjoyment.

There’s just one teeny-weeny little problem with his theory: Where are all the bodies?

With over 100 million lawful gun owners, and several million licensed Concealed Handgun Carriers out there, where are the piles and piles of corpses littering the streets that Mayor Bloomberg believes must be out there as a result of an epidemic of SYG killings? Wait! You can’t count all the bodies in Chicago or Washington, D.C. – that’s where they do, in fact, make legally owning and carrying a gun nearly impossible.

The fallacious contention by the anti-SYG crowd is that SYG laws, in effect, gives license and immunity for any gun owner to indiscriminately shoot anyone they feel like shooting, and are then entitled after-the-fact to a “Get out of Jail Free Card.” Where is the evidence to support such nonsense? It doesn’t exist. But plenty of evidence to the contrary exists.

No one is denying the fact that the crime of murder exists – and has throughout human history since Cain slew Abel. Yet, studies show that less than 1% of all murders are committed by Concealed Handgun Carriers. Sorry, Mr. Mayor, the overwhelming majority of the CCW/CHL folks in America are the good guys, not the bad guys.

The truth of the matter regarding SYG laws is fundamentally a legal situation. Now, I’m no lawyer, nor do I play one on TV, but I do try to do my best to understand the “rules” we’re asked to play by. And in my understanding, the SYG laws were created to protect law-abiding citizens from needless and costly prosecution. That’s why it’s important to understand what may potentially happen to a citizen where SYG doesn’t exist, or if it gets repealed where it currently does exist.

Without the protection of SYG laws, if you shoot and kill someone – specifically in the justifiable circumstance of self-defense – a homicide has still occurred. The police are still obliged to arrest the party they believe committed the homicide, and then subsequently the due process of the justice system determines whether or not the homicide was a lawful act or a crime. And all during that determination period the citizen may have to endure the whole traumatic and costly process of booking, arraignment, perhaps jail time, bail expenses, lawyers, the whole ball of wax.

Conversely, in States with SYG laws on the books, if law enforcement is able to make a clear determination that an act of justified self-defense occurred and therefore no prosecution is warranted, then the whole exercise may just boil down to taking statements and doing some paperwork.

In essence, SYG affirms the legal axiom of “Innocent until proven guilty.” Getting rid of SYG puts the presumption of guilt in committing a homicide back onto the shooter, and treating him like a guilty murderer, until such time as can be proven otherwise. SYG can also provide immunity from civil liability, should, for example, the family of a deceased assailant want to file a wrongful death suit.

At the heart of the whole matter is the realization that those attempting to repeal SYG laws simply don’t want civilians to have guns in their hands. Thus, if you can be made to believe that you might be liable for prosecution for murder should you ever have to defend yourself with a firearm, then maybe you’ll come to believe that carrying a gun simply isn’t worth the risk. And that’s part of the whole overall anti-gun strategy: to make it too expensive, too onerous, too bureaucratic, and too risky to have a gun. Ergo, if you can’t ban ‘em, just make ‘em not worth the trouble.

Therefore, the more pertinent question that we should be asking these days is: With 30 states having Stand Your Ground laws in place, why haven’t the other 20 seen fit to better protect the rights of their citizens?