Priority: Rebuilding Our US Navy

Robert Charles
|
Posted: Nov 13, 2016 12:01 AM
Share   Tweet
The opinions expressed by columnists are their own and do not necessarily represent the views of Townhall.com. 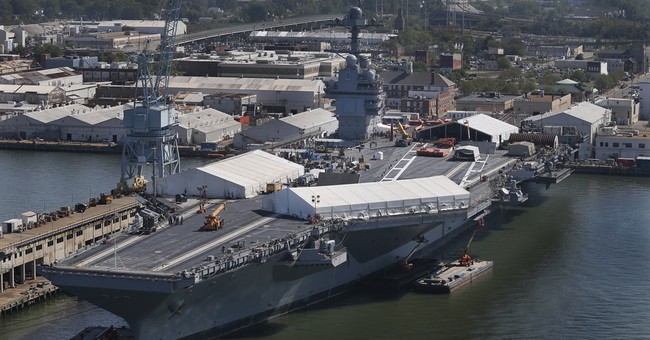 Let’s talk national security, since that conversation is coming, with a vengeance. One issue on which all Republican candidates were united, on which room exists for swift agreement between the Trump Administration and Congress, and on which Democrats may agree – is a tightening focus on US Navy capabilities, procurement processes, strategic priorities and deployment, as well as morale – their exceptional football record versus Army notwithstanding.

For starters, a top-to-bottom review of actual and planned capabilities in the context of emerging threats, from cyber to China, is long overdue. Second, a deep dive on mounting delays, re-designs and the hamstrung procurement process has to be a priority. Against the backdrop of mounting threats and need for more accountable, real time management of the procurement process, specific issues should be addressed in transition. Each deserves a doctoral thesis, but here is the top view. To some this is already common sense, to others it may be new.

Number of ships affects power projection, which translates into credible deterrence and reduced likelihood of war, as well as ability to swiftly respond to outbreaks of violence globally. Reagan knew this. Theodore Roosevelt knew this. Trump and Pence must already know this. Nevertheless to date, the number of American naval vessels stands at a third of its onetime high, as US, allies and regional dangers proliferate. While current leadership has begun to turn the inevitable corner, the turn has been frustratingly slow. Since 2008, 86 new ships have been put on contract, from a starting point of 278.

Theoretically, the Navy will have 300 ships by 2019, and plans 308 by 2021, the first year of a potential second Republican administration. But speaking frankly, this is an anemic response to current threat models, expansion of other major Navies, and foreseeable needs globally. The counter-arguments are that Donald Trump will make the world safer through a predictable foreign policy, which will necessitate less power projection; that he is less interventionist, which means less need to prepare for intervention; that quality will compensate for falling quantity; and that land-, air- and space-based assets will obviate any need for wider sea-based assets.

Each of these four rejoinders is partially true, but also insufficient to warrant any delay in the robust build-out of critical, missing assets with a retooled, accountable, more transparent procurement process. Like Reagan’s “peace through strength” approach, and Theodore Roosevelt’s “great white fleet,” the current Navy will benefit – and all America will grow stronger – with a clear, forward-leaning and unambiguous foreign policy. Wars are often the result of perceived weakness and misunderstood priorities or resolve, and Trump will fix that fast. But this does not make the world a safe place, and that is why our ability to reach out and touch any part of it becomes critical.

Likewise, while the Trump Administration, again following a model set in the Reagan years, will be less interventionist by instinct, and will ask of others that they focus on what they can do for themselves, not rely on us, this is no guarantee of a safe world. Deterrence works, but only if the threat to act is real. That is reason two that we must rebuild the Navy.

The argument that quality sidelines a need for quantity is appealing, but defies the laws of physics and international affairs. Having assets positioned in visible places around the world is essential for credible deterrence, and under current and foreseeable conditions, that requires larger numbers of ships. Readiness for response and an ability to act also requires numbers. We simply cannot get to all the places we may be required to be with so few assets. True, cyber threats, counter-cyber capabilities, airframes with longer legs, faster and more nimble maritime assets are essential, but even these require a wider net, more diffuse power projection. Again, we are behind the curve, and we can foresee a world in which more curves are being thrown.

Finally, a true and robust defense of our national security will require a re-look at the reach of land-, air- and space-based assets. We have some real challenges there also, but we must understand the power of a capable navy in force multiplication. Our space-based assets are useful only when they can direct or guide ground- or sea-based activity, so we need maritime reach to make them valuable. As places like the Philippines and doubting allies across other regions illustrate, we need restored credibility and “naval real estate” that will compensate for lost land-basing. Even our ability to put troops in places as needed for deterrence, combat or post-conflict peacekeeping, depends heavily on naval reach.

So, what is the larger point? The larger point – one of many in the new conversation about improving overall security – is that naval power and the United States Navy needs to be a priority. In the mix are restoration of strong management, procurement reform, return of emphasis to “our people,” recruiting, retention, higher morale and enlisted designators, emphasis on new forms of collection, analysis, and integration of critical intelligence to the fleet, and other needed turns “into the wind” – but tops in this conversation, is number of ships that make us the most capable and credible Navy in the world. From that position will flow greater safety for all Americans. The list of new priorities is long, but this one should probably be near the top.