Robert Charles
|
Posted: Feb 18, 2016 9:02 AM
Share   Tweet
The opinions expressed by columnists are their own and do not necessarily represent the views of Townhall.com. 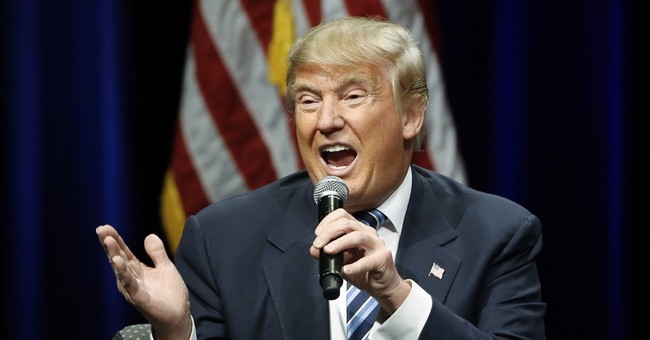 Paper tiger, bluff called? Just another "lines in the sand” guy, the sort who talks big and backs down when confronted? Trump is beginning to sound suspiciously like someone else we all know. Today, Mr. Trump did what some have warned he would do. He issued a threat to Ted Cruz in writing, threatening to sue his fellow candidate, the one who is nipping gingerly at his heels. He demanded that Senator Cruz pull from airwaves an ad showing Trump – on camera – apparently saying he was “pro-choice.” But that is not all.

The written Trump threat to a political rival, who happens also to be a seasoned and conservative United States Supreme Court litigator, was obviously intended to be private. You know, a little private ultimatum among friends, you might say, although signed by Trump’s lawyers. Only that is not what happened, not at all. While bullies prefer that their words not be repeated publicly, you cannot toy with a successful Supreme Court litigator. Trump just threatened the wrong guy.

Cruz promptly took the letter out to a microphone, and read the contents to the world – on camera. Worse for Trump, Cruz laughed at the threat and called it “frivolous,” saying that it fell into a pattern. Cruz to Trump: “You have been threatening frivolous lawsuits for your entire adult life.” Cruz added for good measure: “Even in the annals of frivolous lawsuits, this takes the cake.” Cruz then went one better. He looked Mr. Trump’s fancy lawyers in the camera, dubbed their “cease and desist” letter “one of the most remarkable letters I have ever read,” and challenged Trump to sue him. There you go Don. Boom tick.

Here is where it really gets interesting. Trump responded exactly the way Obama did when Assad crossed his now famous “line in the sand.” Trump up and caved, swerved and said he could have sued him, presumably for libel or something else. “If I want to …” he asserted, he could, and that was it. Sometimes threats, insults and intimidation strategy does not work. Sometimes it hits a hard stop – something immovable – like Ted Cruz. Trump just did.

Doubling down just doubled Trump’s woes. That is my bet, since this is the stuff of which lawsuits are just not made. Public figures – with ample access to airwaves – cannot just sue and win libel suits, especially when the statements involved (or ads aired) are true. Even when false, a statement would have to have been promulgated with the belief that it was false, or made with actual malice. This one seems the opposite. Falsity is hard to prove when the ad features Mr. Trump himself making the statement. Seldom do facts get truer than that.

So, the page turns. We now know more about the Trump way of doing things. There is yet more to the story. If Trump had not backed down, and if he had sued Cruz, think about what he was doing. He would have been seeking to shut off the First Amendment rights of another American – and in a political campaign. Nothing could be more off base, and more anti-American. The suit would have been swiftly thrown out, likely dismissed for a variety of reasons, not least the sanctity of the First Amendment. The notion is so absurd in this context, that it might have even given rise to discussion of sanctions.

In any event, the die is cast. We know more than we knew. Mr. Trump uses such tactics to keep opinions from getting to average Americans. How many other letters like this has he written over the years? One wonders. In this case, Mr. Cruz was hardly going to be bullied. Another bit of bad judgment from Trump.

So, cat is out of the bag. Mr. Trump is like them old bear, full of false charges. To some of us, this news is no surprise. There is a type. To others, seeing The Donald embarrassed, talking big and caving, will be new and a disappointment. In a way, this reality – that Trump is less than meets the eye – is a general disappointment. While Cruz is strong, I wish that Trump was more than bluff and bluster. But he is not.

The line between a viable maverick and yapping mouth can be thin. And as most of us know, words are cheap. Yesterday, Donald Trump was the Wizard of Oz, that Mighty Oz. Today, thanks to Cruz, he is just the man behind the curtain.

This has big implications for America, on the world stage. Threats without follow-through, of which we have seen too many these past seven years, are appeasement and empty bravado by another name. They do no one good. By contrast, men and women who stand by their word and do as they say they will make us all proud. Always have. Those men and women reflect the great leaders in our own national past.

Who knows for sure what the future brings, but the tenor and trajectory of Donald Trump just changed – markedly. So did that of the man who demonstrated he will not be bullied – and will not back down – Ted Cruz. Russia’s Vladimir Putin, China’s Xi Jinping, Iran’s Ali Kahmenei, and North Korea’s Kim Jong-un are – count on it – watching. One man means what he says. The other threatens, pushes others with his money and lawyers.

Today, the self-impressed New York mogul met the rock-jawed Texas Supreme Court litigator. Eye to eye, the Texan – like a modern day Jimmy Stewart or The Duke – stood his ground. We will know them by their actions. We suddenly know more about Trump and Cruz. In the Cuban Missile Crisis, Kennedy did not back away. In the long battle with the Soviets, Reagan did not back down. And thank God.

So, which of these two do you want for president? In a dangerous world, I want the one who will defend my country without over-reaction, and one who has long defended my First Amendment rights, not the one who pressures Americans into surrendering them. Thank you Don for introducing me to the real Ted Cruz – and what you both stand for. Just an average American, I can see now who would stand tall in the White House. I do not need more. Like Harry Truman, I like a good game of poker. I know the paper tiger and how to call a bluff. Apparently, Ted Cruz does too. Enough said.