Recommitting to an America that Works 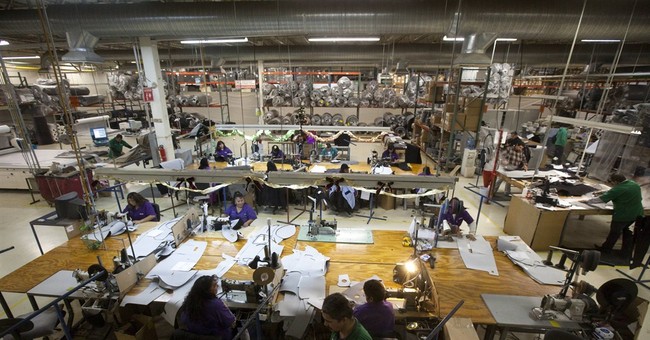 In Washington, they think that “Made in the U.S.A.” is as outdated as carbon paper, and it was bad policies from both parties that hurt American manufacturing.

Only yesterday manufacturing was a key contributor to our nation’s wealth and strength, and it was the economic foundation of many hardworking families. The evaporation of U.S. manufacturing, consequently, was devastating to working Americans.

To explain the challenges that American manufacturers face, let me tell you about Bemidji Woolen Mills, a family-run business I got to know in 2012 when I was running for president.

Campaigning across the frigid Midwest, I’d wear a sweater vest under my suit jacket to avoid packing a bulky overcoat. One evening in Iowa after a long night of speeches, I took off my jacket, and that sweater vest took on a life of its own.

Voters were looking for a down-to-earth alternative to President Obama—someone who shared their values and concerns. Obama is famously “cool”—you can’t imagine him in a sweater vest. But a lot of Americans were fed up with his indifference to their plight. The sweater vest became a symbol of the “middle America” that Barack Obama and his sophisticated friends despise.

People started asking how they could get a Santorum sweater vest. With my focus on reviving manufacturing, I decided that if we were going to offer sweater vests, they better be made in America.

It proved remarkably difficult to find a sweater that was completely American-made and available in the quantities we needed. But eventually we found Bill Batchelder in Bemidji, Minnesota.

Bill’s great-grandfather started out sawing railroad ties for underground mines. He managed to save enough money to start a potato warehouse in Bemidji. Later he realized that every town needed a woolen mill to make clothing, so he turned his potato warehouse into one, and Bemidji Woolen Mills was born.

When the Chevy factory closed down in 1929, at the onset of the Great Depression, Bill’s great-grandfather purchased it, despite everybody’s warning that it was a bad idea. He wanted to move the woolen mill into a larger space, and the factory seemed perfect.

At the start of World War II, he won a contract to produce army blankets. When the postwar Baby Boom was at its peak, family station wagons crisscrossing the country stopped in Bemidji to see the town’s giant statues of Paul Bunyan and Babe. That’s when the woolen mill hit its stride. Kids and families wanted clothes that reminded them of America’s pioneers and lumberjacks, the kind of clothes they made at Bemidji Woolen Mills.

For the rest of my presidential campaign, the workers at Bemidji Woolen Mills turned out sweater vests by the hundreds, running them down the street to the embroidery house to add our logo.

Bill Batchelder is convinced that policy-makers just don’t understand how Main Street works, what creates jobs and sustains communities. He told me about a Democrat in the Minnesota senate who had proposed a tax on clothing priced over a hundred dollars. Presumably the point was to soak the people who can afford such clothing. But a tax like that punishes the worker who produces that clothing and makes it harder for small businesses to survive and create jobs.

It’s not being sentimental to say that Bemidji is the kind of “sweater vest” town that is the heart and soul of America. It’s a scandal that the hopes and dreams, the jobs and families of the people who live there get short shrift from politicians of both parties. Towns like Bemidji just don’t fit into their vision of the future.

Well, enough’s enough. It’s time to stand up for towns like Bemidji and change the warped economic policies that are crippling them. We should do the following, and do it soon:

· Reduce the regulatory burden that stifles innovation, starting with the complete repeal of ObamaCare, Sarbanes-Oxley, and Dodd-Frank

Bemidji reinforced my conviction that we can’t lose touch with folks in the middle of this country. Democrats from Obama on down are dead-set against the reforms that are necessary to rescue the

families and businesses in Bemidji. And to tell you the truth, a lot of Republican politicians aren’t much better.

The American dream shouldn’t be reserved for the well-connected. Working Americans deserve a fair shake, not a shake-down.