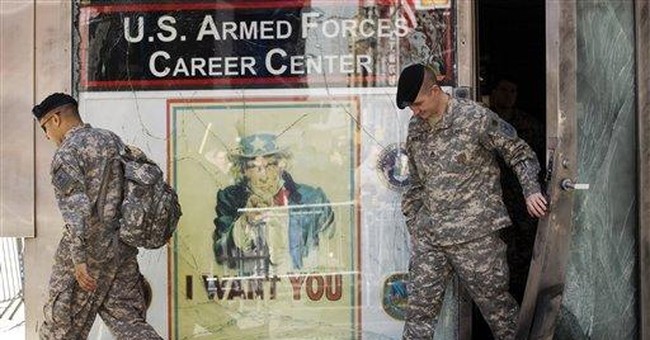 The judge handed the jury's findings to the senior member of the court. Cpl. Trent Thomas along with his attorney, Victor Kelly, slowly rose and stood while waiting to hear the court's decision. At stake for the 25-year-old Marine: either life in prison without the possibility of parole if found guilty of premeditated murder for actions taken while serving in Iraq, or being found not guilty and living as a free man.

"To Charge II a violation of Article 118 Premeditated Murder," the court announced, "we find not guilty." Cpl. Thomas walked out of the Camp Pendleton courtroom and returned home with his family.

However, the government now found itself in an unusual position. Five of Cpl. Thomas' unit mates were serving prison time after being charged with the exact same accusations and taking the same actions as Cpl. Thomas. The difference? He was the only one to challenge the government in court. The others accepted the prosecution's plea-bargain offer.

"In my opinion, the principal factor the five decided to accept the governments' plea-bargain offer, was the potential of life in the penitentiary without parole was just too intimidating," offered Victor Kelly.

And so goes a great untold story in America's war against Islamist extremists. "There are more members of our military accused of murder or serving time for murder than at any other time that I or my contemporaries can recall," defense attorney Anita Gorecki told me.

My inquiries to the House Armed Services Committee to verify the historical comparisons have gone unanswered. "Only the Defense Department has that information and they're not about to release it," said House Veterans Affairs Committee Chairman Bob Filner, California Democrat.

Indeed, this asymmetrical war is unlike any other and some fear our military justice system may not be equipped to handle accusations of wrongdoing.

"Our soldiers are on edge 24/7. There is no front line to retreat from. There is no uniform to identify the enemy. You have layers of ROE [rules of engagement], stress, fatigue and when something goes wrong they face accusations that bring life sentences. I fear we may be eating our own," said retired Brig. Gen. David Brahms, a military defense lawyer who served as technical consultant to the movie "A Few Good Men."

Take the case of another American soldier, 24-year-old PFC Corey Clagett of South Carolina, who was accused of murder in connection with the deaths of three Iraqi insurgents he had taken as prisoners. Despite proclaiming his innocence, his JAG attorney " who was defending her first murder trial -- advised him to plead guilty and not risk life in prison without parole.

Corey Clagett is now serving an 18-year sentence at Ft. Leavenworth prison and spending 23 hours each day in solitary confinement.

With his family unable to afford to do so and his mother frantically seeking help, my radio audience recently raised the legal funds to hire an outside attorney to appeal his sentencing.

Newly hired attorney Tim Litka dropped this bombshell: "As I began to research the case of Corey, I discovered something which caused my jaw to hit the table. Prior to Corey pleading guilty, two other soldiers had already taken full responsibility for all three Iraqi deaths. The government knew this, his attorney knew this, everybody knew but him, yet they still accepted his guilty plea. I feel he had the right to be told before entering his guilty plea."

The case is gaining bipartisan outrage. Mr. Filner of California donated $500 toward the Clagett legal defense and is arranging for the family to make the trip from South Carolina to Ft. Leavenworth to visit their son, whom they have not seen in over a year. Republican congressional candidate Bob Watkins of California donated $1,000 " and added, "This is a story of due process. This young man chose to defend his country and now he cannot afford to defend himself. It is not right."

Corey Clagett was recruited, trained and taught to kill the enemy so that we may each enjoy our American way of life. Now it's time for America to pay its debt of gratitude and allow Corey Clagett to return to his.