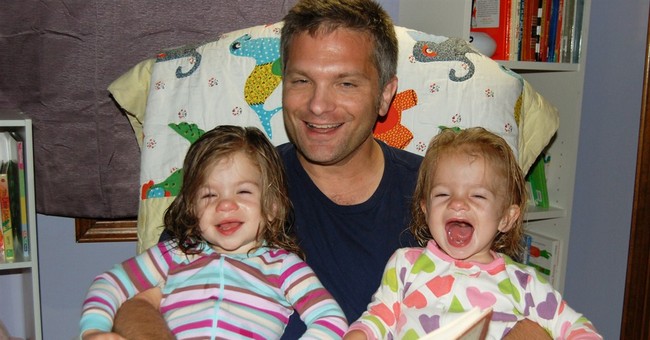 Wait -- this column isn’t a late. It was scheduled to run today, after the Hallmark version of Father’s Day, to remind us that every day is father’s day. Or should be.

Fathers are all-too-often overlooked. A preacher once told a story of how the child who was supposed to play Joseph in the Christmas play came down sick. Yet the play went on, and, supposedly, nobody even noticed the missing father.

Who knows; the story may even be true.

But in reality, too many fathers are missing, and we’re missing them. More than 40 percent of children born in the United States in 2012 were born out of wedlock. That’s some 1.6 million fathers who weren’t where they need to be.

Single-parenthood has big costs for society as a whole: “In fiscal year 2011, federal and state governments spent over $450 billion on means-tested welfare for low-income families with children,” poverty fighter Robert Rector reports. And the cost extends far beyond the big price tag.

Young men who grow up without a father in the home are twice as likely to be arrested as those from intact homes. Almost three quarters of high school dropouts come from fatherless homes. More than 60 percent of youth suicides are fatherless. The list of bad outcomes goes on and on.

Enough with the negative. Fathers are a positive force.

“Fathers are far more than just 'second adults' in the home,” sociologist David Popenoe says. “Involved fathers bring positive benefits to their children that no other person is as likely to bring.” So fatherhood is good for the children. But it’s also good for the dads.

Still, all too often pop culture pretends dads don’t exist. Sitcoms usually portray men as goofy (Modern Family) or incompetent (The Simpsons). That’s when it bothers to portray them at all. “The type of jokes aimed at dads would be banned if they were aimed at women, ethnic minorities or religious groups,” British mother Siobhan Freegard complained last year. “Some people claim it’s ‘just a joke’ – but there’s nothing amusing about taking away good role models for young boys.”

So what’s to be done?
Well, first of all, let’s avoid the knee-jerk reaction of calling for federal intervention. Big government programs tend to be big -- they can spend plenty of money -- but there’s precious little evidence they do any good.

Instead, what’s needed is personal responsibility. Men should, as the old beer ad put it, “Man up.” Instead of going out and buying beer, though (any idiot can do that) it means taking responsibility for our children. Marrying the mothers. Raising the children. Getting up in the morning and going to a job. Giving our children an example to model.

Men: make every day Father’s Day. The country’s future is up to us.