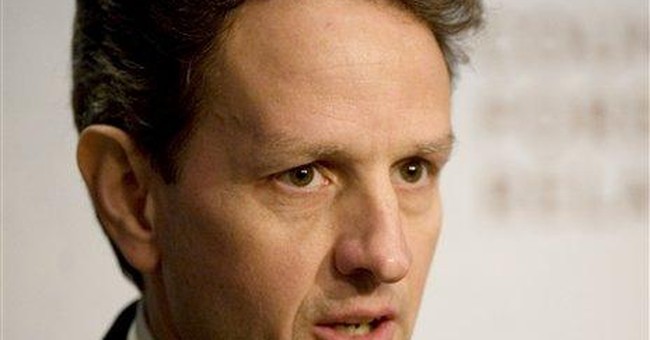 There’s no speedy cure for a hangover. But, as a t-shirt that was popular some years ago said, one can avoid hangovers by “staying drunk.” That seems to be the advice coming from the Obama administration and Newsweek magazine.

The president says he’s crafted “a budget that leads to broad economic growth by moving from an era of borrow-and-spend to one where we save and invest.” It’s not clear just whom he thinks should be saving. But certainly not the federal government.

Obama’s spending proposals would double the national debt, eventually running it up to more than $15 trillion. In total, he would increase federal spending from $24,000 per household (the peak reached under President Bush) to $32,000 per household by 2019. Thus we can expect no savings, just big spending, from Washington.

So is it individual Americans who should start putting money away for a rainy day? Obama’s team say no. At least not yet.

“I think the truth is consumers have also not done a lot of spending for the last 14 months,” Christina Romer, chair of the president’s Council of Economic Advisers, said on NBC’s Meet the Press on March 15. “So what I would predict and I think would be a perfectly reasonable thing is you go out and you buy that car that you’ve been thinking about for 14 months and you do some of the spending.”

Newsweek agrees. “Stop saving now!” its March 23 cover story warns. “For our $14 trillion economy to recover and thrive, hoarders must open their wallets and become consumers, and businesses must once again be willing to roll the dice,” writes Daniel Gross.

“In January, Americans saved 5 percent of disposable personal income, up from 0.4 percent in the fourth quarter of 2007 -- and our newfound desire to squirrel away cash seems likely to continue,” Gross adds.

But wait -- isn’t this exactly what our national scolds have long wanted to see -- more saving?

Just a year ago, another Newsweek article pointed out that, “savings as a percentage of disposable income have plummeted in the United States, from between 7 and 10 percent in the 1960s and ’70s to just 0.4 percent in 2007.” That led writer Eve Conant to wonder, “How often do the words ‘frugal’ or ‘thrifty’ come up in conversation, especially as a compliment?” She added, “perhaps it’s time to bring them back.”

Or, at least, to start rewarding good behavior and punishing bad. We certainly haven’t done that up to now.

In recent years, “we bought houses with no money down, took on huge amounts of debt and let the booming stock and housing markets perform the heavy lifting of saving,” Gross writes. Well, speak for yourself. But, ironically, it’s exactly the people who behaved badly who are now likely to be bailed out.

Consider somebody who started saving in 1999. He’s been maxing out the IRA and 401(k), year-in and year-out. Meanwhile, his neighbor bought a house he couldn’t afford with no money down. That loan was backed by the government through Fannie Mae.

In recent months, our hypothetical saver has been wiped out. All his market gains from a decade of thrift are gone. The major indexes are below where they were when he started making money on the dot.com boom of the ’90s.

The irresponsible neighbor can now expect help. As Treasury Secretary Timothy Geithner wrote this week in The Wall Street Journal, “We launched a broad program to stabilize the housing market by encouraging lower mortgage rates and making it easier for millions to refinance and avoid foreclosure.”

But the frugal investor won’t get a bailout. He has no choice but to sit, watch, wait and hope. There’s no way Washington’s going to make him whole; he’s got to trust Wall Street.

Meanwhile, inflation is certainly coming. With all the money the government is borrowing and spending, and all the money the Federal Reserve and other central banks are pumping out, inflation -- which, like “recession,” became a forgotten word in most people’s professional lifetimes -- is coming back. There’s too much cash sloshing around for us to avoid inflation forever.

This, too, would benefit the irresponsible neighbor. Over the years inflation would reduce the actual amount the neighbor needs to pay, since he’d be paying back dollars that are worth less than the ones he borrowed. It’s a win-win for foolishness. Meanwhile, inflation will further reduce the saver’s nest egg.

During her Meet the Press appearance, Romer added, “over the long haul I’m hoping we’ll come back to probably a higher savings rate, because we know we were at kind of a historic low before this all happened.”

A lovely hope, but there’s no reason to expect it to come to pass. Saving seems like a fool’s game these days. As he presses his big spending plans, the president should be aware that a country that rewards bad behavior will only get more of it. Drink up!