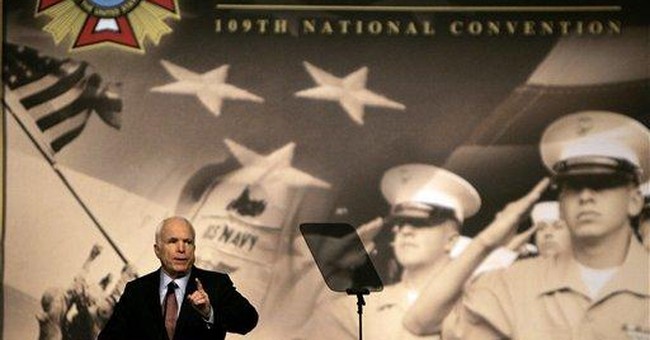 Barack Obama has been flailing in response to the McCain campaign's new aggressiveness, consumed by crying foul. He's gone from hopemonger to whinemonger.

Hypersensitive and defensive, Obama seems obsessed with campaign tactics. This not only plays into the notion that he isn't tough enough, it keeps him from engaging forcefully on substance, especially on domestic issues where he has an advantage.

For the way ahead for Obama, don't look to his tetchy stump performances, but to his paid advertising. Obama's TV ads have taken clear aim at one of John McCain's vulnerabilities -- the Republican offers less direct tax relief to the middle class.

Obama's spots say he'll put "the middle class first," that he'll "cut taxes for working families," that he has "a plan that cuts taxes for middle-class families three times as much as John McCain would," and under McCain, "100 million Americans get no tax relief at all."

Even though their image is a shambles, Republicans are sending onto the field a presidential candidate who perhaps has the least to offer middle-class voters on taxes since the first George Bush in 1992. Of course, Bush lost that year to a Democrat promising only to raise taxes on "the rich" and to cut them for the middle class -- exactly Obama's position now.

In his primary campaign, McCain had to endorse the extension of the Bush tax cuts he voted against in the Senate. But they have turned into a trap. Because Obama also wants to extend the middle-class aspects of the Bush cuts, McCain is left alone plugging for extending the cuts on higher earners. The same McCain who "in good conscience" opposed the original Bush package because it was too skewed to upper-income groups now is supporting a package that, relative to Obama's plan, is even more skewed to the top.

Not to mention the Bush tax cuts have the obvious branding problem of the moniker "the Bush" tax cuts. McCain might be worse off if they were called "the Hoover" tax cuts, but not by much.

McCain has gamely tried to play offense on taxes, although the Obama plan is a diminishing target. Obama has steadily focused his tax increases on families making $250,000 a year or more. In one ad, McCain had to reach back to an Obama vote on a budget resolution to accuse him of wanting to increase the taxes of people making as little as $42,000 a year -- never mind that Obama plans to cut their taxes now.

Obama's middle-class tax cuts are a dog's breakfast of credits and giveaways. McCain's camp is right that the proposals are pandering, and that the Obama approach taken in its totality -- higher taxes on investment, health-care mandates, massive new spending, etc. -- will dampen growth.

But when it comes to the economy, it's a cost-of-living election, with health-care costs and energy prices eroding workers' wages. This is why McCain's new support for offshore drilling has had such resonance. On the tax front, he offers families a doubling of the dependent exemption from $3,500 to $7,000. That sounds like a lot, but people down the income scale don't pay enough in income taxes for the exemption to make much of a difference, and for everyone else, McCain fully phases it in only in 2016.

Unless McCain finds a way to get more relief to middle-class families, he has an enormous weakness. Policy doesn't win or lose elections alone, but it can interact powerfully with a candidate's narrative. One of Obama's best defenses against the notion that he's a celebrity-candidate aloof from average Americans is a tax plan that says he feels their pain. One of McCain's greatest risks of being branded "Bush III" and just a typical Republican is a tax plan crafted long ago by George W. Bush and tilted toward upper-income brackets.

McCain can still adjust, and he'd better. Obama can't be counted on to complain all the way to November.