Vindicators of the Declaration 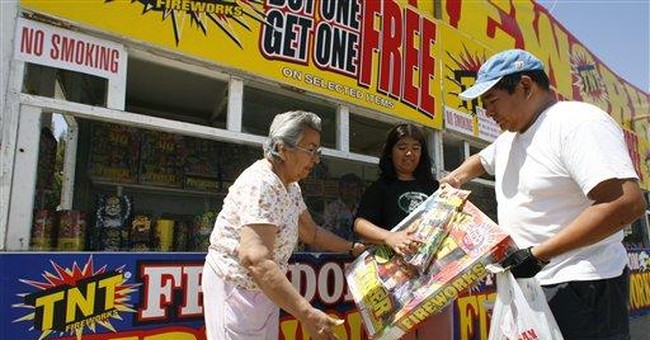 "Decades later the Declaration of Independence was canonized as American scripture," the vinegary historian Walter McDougall writes of the nation's founding document, "but in 1776 it was generally read once -- in army camps, taverns, and village greens -- cheered, and forgotten."

Its fate might have been to be forgotten forevermore, if it weren't for George Washington and his Continental Army. When our great adventure in liberty still seemed an impossible risk, they were the embodiment and vindicators of the Declaration. Our nation was born on the shoulders of an army, whose exertions and principled patriotism gave the famous parchment its life.

Besides the Continental Congress -- which hardly covered itself in glory -- the Army was our first national institution. It joined together well-mannered Virginians, quarrelsome Yankees and backcountry riflemen in an incubator of the nation. Independence from Britain was hardly a unanimous proposition. John Adams thought a third of the country supported it, a third opposed and a third was neutral. It was on the Army that independence would stand or fall, and Gen. Washington's strategic imperative was always to preserve the Army to preserve the nation.

He knew if he kept the Army alive, eventually the British would tire. And keep it alive he did, though sometimes by the barest of margins. After the war, Washington marveled that "such a force as Great Britain has employed for eight years in this country could be baffled in their plan of subjugating it, by numbers infinitely less, composed of men oftentimes half starved, always in rags, without pay."

Washington gathered around him an officer corps he called his military family. They were talented and devoted to him and -- more importantly -- to the principles of the cause. Washington's chief of staff Alexander Hamilton insisted that the rights of man "are written, as with a sunbeam, in the whole volume of human nature by the hand of the divinity itself and can never be erased or obscured by mortal power."

A revolution always faces at least two threats -- from its outright enemies and from its friends, who often betray it and seize power for themselves. As important as any of Washington's military successes was the example he set in dealing with the Continental Congress and -- despite all the frustrations getting his Army paid and equipped -- deferring to civil authority. As the French author Chevalier de Chastellux said during the Revolution, "This is the seventh year that he has commanded the army and he has obeyed Congress: more need not be said."

When at the end of the war, a colonel sent Washington a letter suggesting he become king, Washington wrote back a stern rebuke. The brilliant Washington biographer Richard Brookhiser -- whose latest book is "George Washington on Leadership" -- notes that Washington asked for written confirmation from his aides that his reply had been sent, the only time he made such a request during the war.

Of course, when the war ended, he resigned his command and returned to Mount Vernon. Upon hearing the news, an astonished King George III said, "If he does that, he will be the greatest man in the world." Before he did, Washington had a last instance of drama with his Army. Camped in Newburgh, N.Y., at the end of the war in 1783, the Army grew restive because Congress was tardy in paying it. Insurrection was in the air.

In a tense meeting with his officers, Washington told them that in rejecting rebellion, "You will give one more distinguished proof of unexampled patriotism and patient virtue, rising superior to the pressure of the most complicated sufferings; And you will, by the dignity of your Conduct, afford occasion of Posterity to say, when speaking of the glorious example you have exhibited to Mankind, 'had this day been wanting, the World had never seen the last stage of perfection to which human nature is capable of attaining.'"

The day wasn't wanting, nor were the men in arms who vindicated the Declaration.