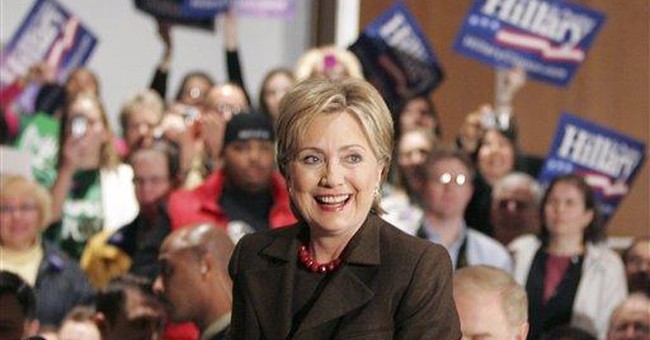 Hillary Clinton ceased to be the Democratic front-runner weeks ago, humiliatingly enough for her formerly inevitable campaign. But it was only after her drubbing in the Wisconsin primary that she became an inconvenience, the superfluous woman of Democratic politics.

Among elected Democrats and the press, there is a palpable impatience with Hillary's continued presence in the race: Won't this lady ever leave so we can consummate our love affair with Barack Obama?

Hillary's bulwark was to be the Democratic establishment, but here was the party's immediate past presidential nominee, John Kerry, an Obama supporter, shooing her off the stage. On Sunday, he said she didn't just have to win Texas and Ohio, but win them by large margins -- setting a nearly impossible standard.

Here was Bill Richardson -- who had two Cabinet posts in the Clinton administration and spent most of his own aborted presidential campaign sucking up to Hillary in hopes of being selected her vice-presidential nominee -- saying that whoever has the most pledged delegates after Texas and Ohio should be the nominee. He knows -- and everyone knows that he knows -- that Obama will still be leading in pledged delegates no matter what.

Here was the Democratic chairman of the Senate Intelligence Committee, Jay Rockefeller, endorsing Obama just as Hillary launched her "3 a.m." advertisement, arguing the Illinois senator is too dangerously inexperienced to be trusted in the White House in a national-security crisis. Rockefeller called Obama "the most qualified person -- Democrat or Republican -- to lead our country in the face of enormous challenges."

Usually, it's the front-runner in any nomination contest who suffers the excoriating attention of the press. In October, in the famous "pile on" debate in Philadelphia, NBC moderators Tim Russert and Brian Williams teamed up with her rivals to bludgeon Hillary for two hours. At last week's debate in Cleveland, with Obama sailing after 11 straight victories, Russert and Williams were still noticeably tougher on Hillary, even as she flailed against the new front-runner.

Hillary weakly complained about getting asked questions first and the deference showed Obama. Whining never becomes a presidential candidate, even if she's right. She senses what's obvious -- that many journalists have discovered their latent Clinton hatred because they've finally realized the presumption and sense of entitlement of the Clintons, or have found their low-ball tactics repellant, or simply don't like her when they have an alternative candidate who's so bright, shiny and new.

Veteran Newsweek writer Jonathan Alter captured the spirit in a column calling on her to drop out before Texas and Ohio. She could "go down classy, with a real chance of redemption." Nothing would so suit her, in other words, like being out of the way.

He's cool; she's clunky. He's a natural; she's workmanlike. He's the hot, fresh thing; she's been "fighting for change" for 35 very long years. For all that, Hillary is a serious person afflicted, as she put it once, with "a responsibility gene." Politicians rightly earn our scorn, but their most admirable quality is to keep going when they are contemned and condescended to, when all the great and good turn their backs.

It is a sign of her diminishment that all Hillary has left are the voters, especially those unglamorous voters who aren't young or rich or independent, but working-class Democrats without the time or inclination to stand so long at Obama rallies that they faint in the middle of his speeches. If Hillary hangs on in Texas or Ohio, it will be because they doubted whether a novice senator who burst onto the national scene the day before yesterday has the experience to be commander in chief and found that Hillary spoke more convincingly to their economic anxieties.

Even if Hillary wins Texas or Ohio, she'll remain behind in pledged delegates and can prevail only if superdelegates become convinced Obama is fatally flawed. But she'll have the standing to stay in the race, as inconvenient as ever.