Rich Galen
|
Posted: Sep 08, 2016 11:08 AM
Share   Tweet
The opinions expressed by columnists are their own and do not necessarily represent the views of Townhall.com. 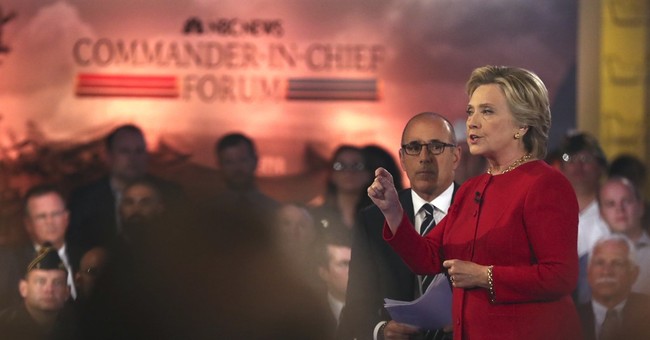 Hillary Clinton and Donald Trump participated in what might be called a split squad debate - they were on NBC sequentially to talk about military, defense, and veterans affairs.

You either watched it or, if not, you can read the transcript. The format was Matt Lauer - that noted expert in military and foreign affairs - asking questions interspersed with questions from actual veterans in the audience. Each candidate had a half hour.

It surprised me that NBC didn't use a correspondent with expertise in defense and foreign policy rather than their Today Show host. I know the Today Show is part of the News Division, not the Entertainment Division, but still.

The good news is Lester Holt will be the moderator of the first debate.

The vets' questions were tougher.

One of the secrets to prepping a candidate for a debate is for that candidate to have been peppered with the tough questions and tougher follow-ups from staff and subject matter experts until they can answer those tough questions without losing their temper.

This is not as easy to do as it is to type.

Hillary Clinton went first and perhaps gave us a preview of how she will act during the head-to-head debate on September 26.

It appeared to me, halfway through the Clinton part that she was prepared for the tough questions and was ready to demonstrate a level of detail that her campaign thinks Donald Trump can't match without showing signs of irritation.

I am writing this in real time and, so far, she appears to have succeeded.

Matt Lauer demonstrated zero capacity to cut off Hillary Clinton or Donald Trump when their answers were longer than he (and the NBC producers) wanted them to be.

He, too, went with this strengths: His answers were not precise but his ability to spin a story were, again, astonishingly good.

It's the approach that has served Trump well over the past 18-or-so months, and it probably served him well again with his supporters last night.

If, indeed, this was a preview of what we will see on September 26 then the breathless anticipation may be misplaced.

Remember, the two candidates were not on the stage at the same stage last night and the fact that Clinton went first (and, assuming Trump was not in a $64,000 Question Isolation Booth) he could hear her answers which gave him an advantage.

It seemed to me that Matt Lauer was better prepared, or more willing, to challenge Trump on his answers than he was challenging Clinton, but that might have just been my take.

Bottom line? Not a single vote got changed.