No "Trump" Puns in Nevada

Rich Galen
|
Posted: Feb 24, 2016 1:55 PM
Share   Tweet
The opinions expressed by columnists are their own and do not necessarily represent the views of Townhall.com. 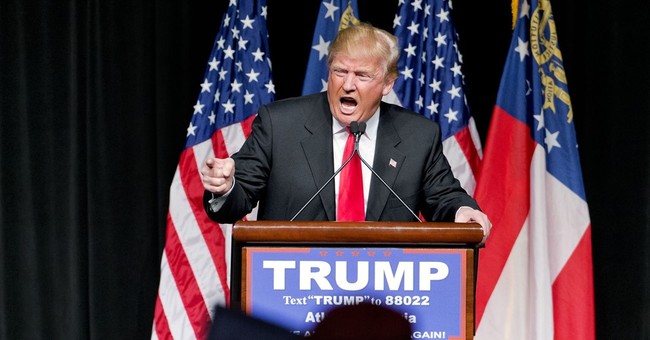 One of the things you learn when doing communications and messaging for a political campaign is: Find something good to say.

If a poll shows your candidate is in 9th place 276 percentage points behind the guy in 8th place, you say, "Our internals indicate our message is just beginning to break through, so we take great heart in these excellent numbers."

Then you go to confession. Even if you're Jewish.

You've seen the results from Nevada. Donald Trump didn't just win, he won with almost 46 percent of the vote. So much for that ceiling of support that the genius pundit class (including me) has been talking about for six months.

"Well, this was a small sample," is another dodge. "At about 75,000 it was only about 10 percent of the vote from South Carolina on Saturday."

Ted Cruz celebrated his third straight third place finish by pointing out that with his win in Iowa, his is the only campaign that has a win against Trump. Maybe, but if Cruz doesn't win Texas on March 1, he won't have to travel far to get home. Even if he wins his home state in a close election, he will have trouble finding a rationale to stay in the race.

Kasich is trying to do well in three of the 11 March 1 "Super Tuesday" states: Massachusetts, Vermont, and Virginia, and then hang on until the campaign moves into the Midwest - Michigan on March 8 and his home state of Ohio on March 15.

Kasich has the advantage of an intervening debate (Thursday night from Houston) with only five people left on stage, and he has used debates to his advantage since his first appearance at the children's table in the very first one.

If he doesn't score well on March 1, he may have to leave the arena before the game ever gets to Ohio.

Ben Carson. What is left to say?

Then there is the leader of the parade, Donald J. Trump.

I won't recount all the things I said that were wrong other than to point out I wasn't much wronger than anyone else.

I have long felt that Americans vote for President far more out of emotion than intellect. We've all seen the man-on-the-street interviews just before an election when someone tells the reporter that he or she is voting for candidate X.

"Why?" the reporter asks.

"I agree with his positions."

"What positions to you agree with?

Trump says whatever comes into his head. As an example, during his victory speech from Las Vegas Trump announced that he "loves the poorly educated" which caused some heavy-duty head scratching around Mullings Central, I can tell you.

As of this writing, Donald Trump is leading in the polls - some of which are way out of date - in 10 of the 11 Super Tuesday States. He is in second only in Texas, where Cruz leads him by one percentage point 29-28 in the latest poll with Rubio only three points back at 25 percent.

It is very possible, if not likely, that Trump goes 11 for 11 on March First and, as he also said in that Las Vegas victory speech, "puts this away."

Lad Link: The Lad (@ReedGalen) takes a pretty smart deep dive into the Insiders vs the Outsiders in this election cycle. Click HERE.

On the Secret Decoder Ring page today: Links to the official results from Nevada from the Nevada GOP and a link to Trump's victory speech.

Also a totally self-absorbed Mullfoto of me on the set of the BBC Wednesday morning.