Rich Galen
|
Posted: Feb 08, 2016 11:50 AM
Share   Tweet
The opinions expressed by columnists are their own and do not necessarily represent the views of Townhall.com. 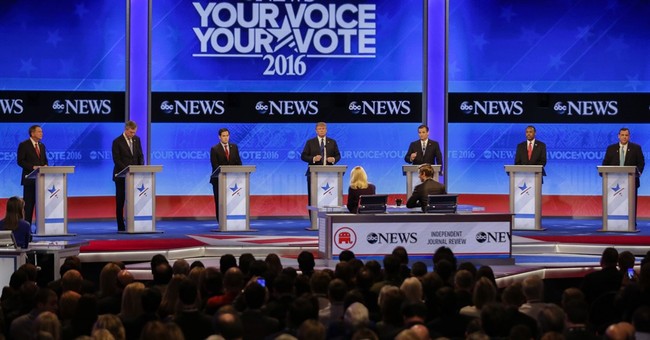 Opening Super Bowl 50 Note. I knew who the teams were. I did not recognize all of the products/services that were being advertised, so; I didn't get many of the jokes. Finally, I didn't know any of the performers in the halftime show.

I believe I am out of the demo.

The debate Saturday night was, I thought, the best of the series. It had to do with what we've talked about before: the candidates are more familiar with their own material, they know what to expect from their opponents, and they know how to pace themselves through at 2+ hour event.

This one had an additional element: Panic.

Like it or not, the results of the New Hampshire primary tomorrow will likely mean the end of another three-or-so candidacies.

After tomorrow here are the possible drop-outs (in alphabetical order):

The best bet among those is Fiorina. Three others are within a few points of Ted Cruz who is, at least in one poll, in third place behind Marco Rubio who, in turn, is double digits behind the leader, Donald Trump.

Don't go looking at polling figures this morning. The debate was late Saturday night, so it was too late to call homes (or cell phones) in New Hampshire. Yesterday was Super Bowl Sunday, so there were maybe four hours between noon and four to crash the phones to get respondents.

The quick in the New Hampshire voting is this: Independents (who make up about 40 percent of the electorate there) can vote in either primary.

But, some analyses of that election indicate that George W. actually won among Republican voters. But, the McCain team, better understanding the rules of the game, turned out independent voters in enormous numbers - high enough to build that margin.

So, the questions that will be answered Tuesday are:

How many independents will come out to vote?

How many will vote in each primary?

How will they split those partisan votes between Clinton and Sanders on the D ballot and among the candidates still remaining on the R side?

But, in answer to the question you are asking this morning at the Keurig machine: Should we just have a one-day 50-state primary so that these tiny, unrepresentative, self-important states don't control the entire flow of the primary season?

No, would be the answer to that.

If there were a one-day national primary only the Clintons, the Trumps, the Bloombergs and others of that level of wealth and influence could even think about running, much less put together a national operation to execute it.

For all of the other faults of the Iowa, New Hampshire, South Carolina, Nevada start, you don't have to have $100 million in the bank just to get a seat at the table.

Jimmy Carter was a sitting Governor, but not rich, when he ran in 1976.

Bill Clinton really was poor when he ran for President in 1992. The New York Times reported that Clinton's annual salary as Governor of Arkansas was $35,000 - about six minutes of one of Hillary's more recent speeches.

So, this mechanism is ugly and unfair, but until someone comes up with a better system it's what we've got.

By Wednesday morning the GOP field will have been further narrowed and the circus will move on to South Carolina for the primary there on Saturday, February 20.

On the Secret Decoder Ring page today: A link to previous New Hampshire primary results and a link to a list of upcoming primaries and caucuses.