Rich Galen
|
Posted: Jan 07, 2016 12:01 AM
Share   Tweet
The opinions expressed by columnists are their own and do not necessarily represent the views of Townhall.com. 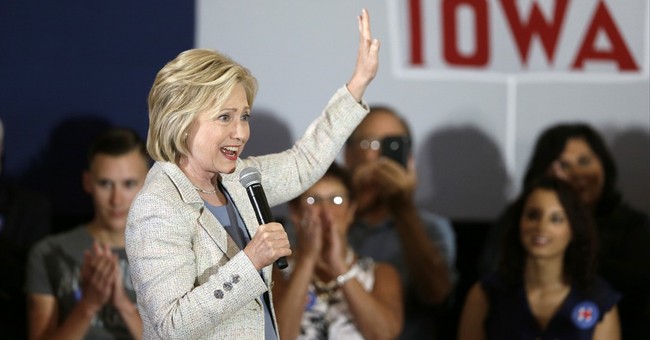 All of the posturing. All of the spinning. All of the punditry. All of the knowing glances among the political pros will mean nothing in about 25 days when the good people of Iowa trudge out, certainly in the cold, and maybe through the snow, to their neighborhood caucuses on February 1.

We will know - or we will think we know - who won on both the Republican and Democratic sides by about 11 PM Central Time.

Remember that just four years ago Mitt Romney was pronounced the victor on caucus night only to have it be "Steve Harvey'd" a couple of weeks later when the ballots were sort of recounted they found out that Rick Santorum had actually won.

Four years before that, the late Fred Thompson was announced as having come in third behind Mike Huckabee and Mitt Romney. But just a whisker ahead of John McCain.

One precinct had not counted its ballots due to a computer glitch and Fred was concerned that when they were, McCain will have edged him out for third place.

"Don't worry about it," I told him. "David Yepsen (then the Des Moines Register's senior political writer) wrote in the paper this morning that you came in third. You will have forever come in third."

The Iowa Caucuses, as you will hear over 1,000 times in the next three weeks, do not often determine the ultimate nominee. On the Republican side only twice, since 1980 has a contested race been won by the man who ended up winning the nomination: Bob Dole in 1996 and George W. Bush in 2000.

What the caucuses DO do is winnow the field. It will not surprise me if three or four of the GOP candidates at the back of the pack will drop out; the rest will hang in for another week to see what happens in New Hampshire.

In Iowa in the wintertime there isn't very much to do, and in a Presidential year every candidate campaigning for anything shows up at any event involving any Presidential candidate to buddy up to the press corps following him or her.

In 1980 I was the press secretary for a man running in the primary for U.S. Senator. Our opponent was Chuck Grassley. As Chuck Grassley is still the Senator you know how that campaign came out.

That, though, is not the story.

This is: Jerry Brown (in one of his earlier lives) was running for President. We were all at a pancake breakfast in, I think, Des Moines and I got into a chat with a reporter from LA.

"I think Brown will do very well in Iowa," she said, "because of his commonality with Iowa farmers regarding the environment."

I didn't have a good answer for that so I drifted off to see if I couldn't scare up some interest in my Senate candidate. Our campaign manager, an Iowan, came racing up, to breathlessly tell me that the Brown campaign had misprinted its campaign buttons.

He took me over to the vicinity of an aide to Brown and pointed to his lapel on which was pinned a button printed in the color brown, but which had no writing on it.

"His name," I said slowly while looking for a way out of the church basement, "is 'Brown.' It is a brown button. The color …"

The light went on in his head and he, too, looked for an easy exit.

I found that LA reporter and said, "Let me tell you about this 'commonality' thing you're counting on."

On the Democratic side, in 2008, Hillary Clinton was sailing along with most reporters at the bar in the Marriott on Grand Avenue confidently telling each other the caucuses would be her first step on the path to the West Front of the Capitol Building the next January 20.

She came in third behind Barack Obama and John "Big Daddy" Edwards. Obama won Iowa that year with 38 percent of the votes.

Hillary and Edwards split just shy of the 60 percent between them.

If either Hillary or Edwards had not been in the race it is unlikely that a Black Senator from Illinois would have won; but they were, and he did.

A similar story will probably be told on the Republican side this year. Someone, probably Ted Cruz, will win with far less than 50 percent of the caucus ballots cast but will claim momentum as the caravan moves onto the next event about a week later: The New Hampshire primary.