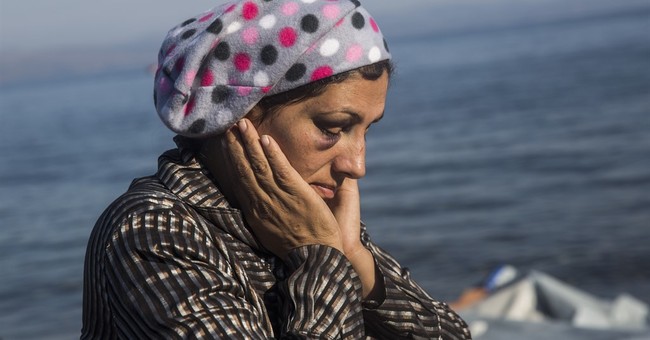 The other day I wrote a column in which I suggested "The easiest and safest approach [to dealing with terrorists hiding as refugees] is to close the border, TFN - 'til further notice."

I am far from a Tea Party, ultra-conservative Republican. In fact, I call myself a Trotskyite Republican which doesn't mean anything but is way more fun to say than "RINO."

Still. Taking a bit more time to figure out what we want to do, and how we want to do it seems to make some sense.

In October, my friend Tim Hyde (who is a professional photographer among other things) and I went to Hungary to photograph and write about the refugee issue as we found it in Serbia, Croatia, and Austria.

One of the issues in parachuting into a situation like that is you are seeing it as through a straw. Your field of vision is about a half inch in diameter. The rest of the world, outside the straw, is invisible. To that end, we spent a good deal of time visiting with, and talking to volunteers we found at crossing points. Some had been there for days. Some for weeks. All for longer than we.

They told us that only about 20 percent of the people coming through were from Syria. The rest were from other Arab countries, some from Africa, a huge contingent from Afghanistan, and one young man, who I interviewed, was from Iran.

The question was: Are these refugees (escaping from their homeland), immigrants (moving to a new country for financial/personal reasons), or migrants (having looked for/found work in Place A only to be moving onto Place B to look for more work)?

It appeared to us that some - many - were, in fact, refugees. They had that weary "Grapes of Wrath" manner about them. They were often women traveling with young children; the children shouldering backpacks as large as they were, carrying what family belongings they could.

Almost half, according to different volunteers at different border crossings, were Afghans. Young men. Mid-twenties. Confident. On a mission. They might have been looking for a life that promised more than living under the thumb of the Taliban or being a vassal under a warlord. As none of us spoke Pashto or Dari we don't know.

Then there was a young Iranian man. He did speak English and said he was a mechanical engineer who was making his way to the UK where he could better use his language and engineering skills. When asked why he didn't just fly to London (or Vienna) he said, "Because I wouldn't have been able to get a visa. Traveling this way, I don't need a visa."

When I wrote about him I asked, rhetorically, whether he was taking unfair advantage of the situation or availing himself of the opportunity that had presented itself.

All this verbal confetti about whether to accept "Syrian refugees" appears to be, not surprisingly, borne of ignorance. The majority of the people flooding into Europe are not Syrians. The majority are not even refugees.

Appearing on CNBC yesterday, retired Brigadier General Mark Kimmitt suggested that that longer-term answer was to "change the narrative" that was attracting young Muslims to the violent edges of their religion.

Americans can't do that, he said. We can't lecture them on the fallacies in Wahhabi or Salifi teachings. That has to come from mainstream Islamic leaders.

America can help them do that. Kimmitt told me that this shouldn't be viewed as a "Manhattan Project," but as a "Madison Avenue Project."

Once the immediate reaction to the horror of Paris begins to fade, international leaders will, we hope, take a long hard look at not just what happened and how to prevent it from happening again, but why it happened and, as General Kimmitt said, change the narrative that led to its having happened in the first place.

As I wrote at the conclusion of the series: We did find out that a very high percentage of the people moving toward the EU were more-or-less middle class. And, for the most part, they were either looking for a better life for themselves, or looking for the same life in a better place for their families.