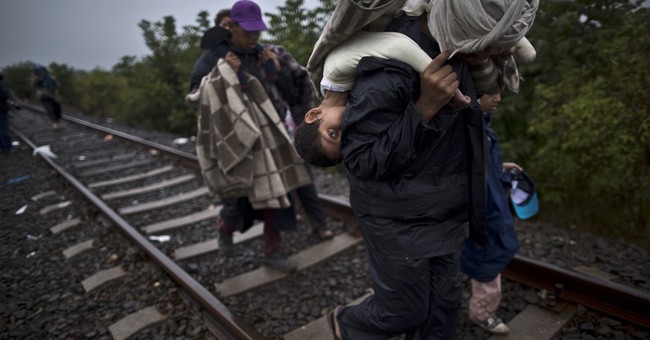 It was late afternoon when we got to another border crossing point, Magyarboly, Hungary. This was like a military encampment including two Armored Personnel Carriers. Because of my long history as a private in the Ohio and New Jersey National Guard I determined they were not there to carry personnel but to be used as barriers across the roadway if migrants got out of hand.

As the sun set (and the temperature dropped) we saw a line of buses pull up on the Croatian side of the border. We were told we couldn't take pictures from the crossing itself, but Tim could take photos by walking down next to the official crossing and shooting through a fence.

We couldn't count the buses, but it looked like seven or eight.

The police wouldn't talk to us, and there were no aid workers around, but we determined they were bound for the train station in town to be transferred there. So, we hopped into Gaby's car and headed that way, too.

The thing about GPS is the systems are only as good as the data they are working with. In a place like southern, rural Hungary the data is a little sketchy. We are directed to roads that don't exist, or routed away from roads that clearly would lead to where we are trying to go.

One night, in Serbia, we found ourselves going the wrong way on a new motorway. We got off to get back on going in the opposite direction. The woman's voice on the GPS told us to "Turn right onto the "slip road." None of us know what a "slip road" was and, in any event we missed the turn. Slip road, we later determined, is a British phrase specifically invented for GPS systems meaning an on- or off-ramp to or from a major highway.

At one point we had four GPS devices running at the same time. And none of them agreed.

We saw two men in black leather jackets walking along the side of the road. We asked them how to get back onto the motorway. The pointed in the direction we had come from and started laughing uproariously.

We knew we would be the subject of much derision later that evening as they recounted the car with Hungarian license plates lost in whatever village we were in. "And," they would say, "the best part is: There were three AMERICANS inside!"

We found our way to the train station just as police cars by the score were arriving. Obviously those buses we saw at the border were headed this way. It was dark now, and cold. We parked our car and entered the station area. Tim with his camera, me with my official reporter's notebook and pen at the ready.

There was a very long train along the far track. The entire train was dark, but we could see the silhouettes of people inside. Tim started taking pictures. I started counting cars. Eighteen, I thought.

A one-car commuter train pulled into the near side tracks and three women dismounted. As they saw all the police and the long train, they hurried out of the station. Whatever was going on, they wanted no part of it. The driver of the commuter train reversed course and pulled right back out. He didn't want any part of this, either.

A policeman began gesturing at us and talking loudly. Gaby told us he was telling us we couldn't be here. She said "This is a public train station. Anyone can be here," she protested. "You just saw those women get off the train. You have no authority to make us leave this platform." He wasn't sure if he had the authority or so the policeman tried to stare us down, but we had already defeated the "Delete" cop, and we were not very easily intimidated at this point.

A man stuck his head out of a train window and shouted, "Process! Process! No food. No Water. Four hours!"

There was nothing we could do to help him but Tim commented that we had seen no volunteers either at the border crossing nor here at the station. A train door flew open and the same man ran over to us. "Four Hours," he shouted. "No food. No water. Why you not helping?"

There was nothing to be done. There were no stacks of water bottles. No bags of sandwiches and food. No snacks. Just an empty train platform in the middle of nowhere, empty but for an increasing number of police. And us.

The man was hustled back onto the train, but we felt like we had let him down.

A few minutes later the door opened again. Another man got out and turned toward the open window. As we watched, what could only have been a baby was handed out into the man's outstretched arms. She was dressed in pink onesy that looked like it might have been padded for warmth. One arm hung limply as the man - who was clearly not used to carrying a baby - walked up to the office who was in charge and said something. Fathers will put a baby over their shoulder. Mothers will either do that, or park them on a hip. He carried the baby like he was holding a log.

He was directed to a bench where he gently laid the baby down, took off his coat, and wrapped her in it.

Gaby asked what was going on and was told that the baby was sick and they had called for an ambulance. Juli wanted to go help, but I said we couldn't interfere and, in any event, if the baby needed medical help she might just make things worse. We watched the man to see if he changed his posture; began to look panicky. I'm not sure what we would have done, but our "non-interference" position would have shifted fairly dramatically.

Worried and constantly glancing over, we made plans for covering the arrival of the trucks. Even the female police officers were keeping a close, worried eye.

We had been told over and over that Syrians only made up a relatively small portion of the migrants. There were a lot of young Afghan men who were, we were told, very aggressive. In one place they told us that the Afghanis trampled children to get to the front of the line and took food from people.

I don't know if that was true, or if it had become folklore: Having seen young, healthy males walking faster across a field than a woman with two small children the story had morphed into trampling and stealing food.

As the buses began to pull up, the police took up their positions. They did not act like prison guards or riot police. They were polite, but firm in wanting the process to move along smoothly. About 75 people got off each of the buses.

Sometimes it was women with children first. Sometimes it was young men first. But, they were orderly as they were ushered onto the train at one end or the other. As one bus was emptied and pulled away, another pulled into its place and the process repeated.

Between the second and third buses the ambulance crew arrived. There had been no siren and they showed no sense of urgency. They stopped as they came through the station gate and looked around. I pointed to my left and said "She's on the bench." I don't know if they understood what I said, but the understood where I was pointing.

By this time, we were very worried about the baby and breathed a communal sigh of relieve that help had arrived.

The two activities went on - the boarding of the bus passengers and the treating of the baby - with neither taking any note of the other.

As the final bus pulled up, two men got off last and spoke to the policemen at the foot of the bus step. They were taken to the lead cop and talked some more. For the past few buses the people were led to the left hand end of the train. These two men, after making "this high" types of gestures, were led to the right hand end. We presumed they had been separated from their wives and were being led to the end which corresponded to the bus they had been on.

While that was going on, the EMTs had taken the baby into the train station. We should have insisted on at least that in the first place, but it hadn't occurred to us. As police took their places along the platform, someone came along and locked each train door.

We looked at each other. Even though these were willing travelers, not people who had been abducted from their homes, it made us all feel very uncomfortable.

A few minutes later, the EMTs came out and told Gaby that the baby had not eaten all day. That her mother got separated from her and was in Germany. The man who was travelling with her had powered formula but not hot water to mix it with so the baby had become dehydrated. She was not in danger, they said, but they had offered to take her to the hospital. The man declined and wanted to continue on his way.

He came out of the station still carrying the baby in front of him instead of over his shoulder and, did not attempt to get into the train car using the door and stairway, but handed the baby back up through the window. I looked around and each of us, along with every cop on the platform was using "body English" - leaning forward to help get the baby into the window without tumbling to the ground.

She made it and the man mounted the train steps as the door locked behind him.

Ten minutes later the train slowly moved off. 1,500 more migrants making their way to the Austrian border to start the next chapter.

As we loaded our gear and ourselves back into the car I must have been more quiet than usual. Someone asked me what was wrong.

At least for now, the baby had lived.

I hope she lives a long and successful life. Maybe she will win a Nobel Prize in Physics. Or, maybe she will be the one that teaches the world that getting to the station first isn't what is so important. That being younger and faster and stronger only matters if you slow down once in a while and give a hand to those who are older, slower and carry heavier burdens.

And there will still be water and food enough for all.

At least, that's what I prayed for as the train went on its way.