The Hungary Games Part I 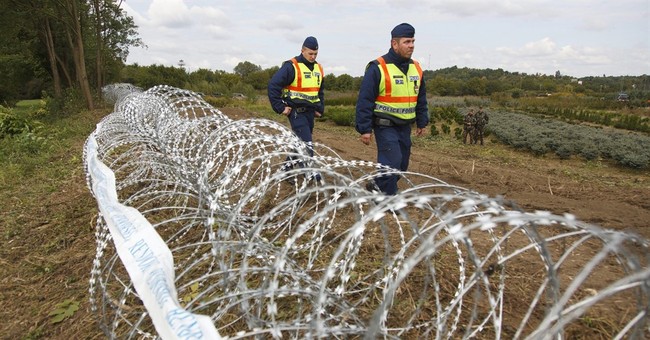 I don't know who these people are that show up to help when catastrophes happen. You see them helping fill sandbags in the face of an oncoming flood. We saw them manning the water bottles and sandwich supplies to help with the flood of migrants.

One young man, Marc, came from Germany. He is 21 years old. He dropped out of college some time ago and has been on a personal walkabout trying to decide what to do with his life. He found a Twitter handle, #Zakany, that got his interest and decided to come to this small summer resort community and help with the migrants who come across the border into Hungary; there to board trains to take them on.

The basic route of travel for migrants is: Cross the border from Croatia or Serbia into Hungary. Be taken by train or bus to a central train station. Be packed into trains 12 - 18 cars long for the 8 hour trip to the western border where they cross into Austria and are then free to go wherever they want.

Marc told us in almost idiomatic English, that the police here in this small Hungarian town were not at all helpful, and often tried to obstruct the aid workers' activities or were just cruel for the sake of it.

"After the migrants are gathered up, we get 10 minutes to check them for their health, give them water, sandwiches, bananas - whatever we have. Then we help them move toward the train. If we don't do what the cops say," he tells us, "they punish the people by cutting down our 10 minutes to six or seven. We often can't get to everyone in that time, so it increases the tension for no good reason."

It is a beautiful early autumn afternoon in Zakany, about 300 km south of Budapest. There are no migrants coming now, so the police are gathered up the platform, eyeing us. The half-dozen or so aid workers are sitting and chatting, waiting for the next wave.

Another volunteer, a middle-aged woman named Erica, tells us the migrants show up at about 1,500 people at a time. No one could help me understand how they found each other to form into travelling groups, or where this happened. There might be secret hashtags and websites that tell them where to go.

"We are about 2 kilometers from the border," Erica tells us. "They walk through the forest from the Croatian border to get here."

The Hungarians are busily erecting razor wire fencing at crossings like this to seal the border, and tell the workers it will be done in a matter of days so they can go home. But Marc tells us they see a lot of heavy equipment "too much to be the final stages," he says. He thinks the Hungarians are saying the border is about to be closed to dissuade migrants from trying to cross there.

How to they know when a group of migrants is approaching? "The Croatians send us Twitter messages to alert us to get ready, Erica tells us. She shows us an example on her smartphone:

"40th special train left Tovarnik at 12:03 pm and is due to arrive in Botovo in 4,5 hours. #Refugees are currently boarding 41st train"

Welcome to the brave new world.

These volunteers remind me of the Tom Joad speech from "The Grapes of Wrath:"

Back in the car, I said that I didn't think, when I was 21, I would have ever thought about coming to a place like this to live in a small, shared apartment, and help people get on trains with some food and water. Maybe, if I were in my prime in the age of social media when these crises popped up on the "Trending" lists, I might have tried to help fill a need.

Probably, though, I would have thought about going, but never quite have figured out how to get here. My noon-day sun was too many days ago.