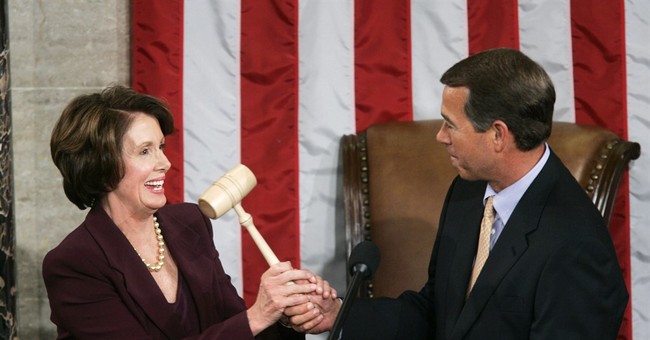 There is a rarely used motion available to Members of the U.S. House who are dissatisfied with their leadership. The form is: I move to vacate the chair."

Sounds innocuous but the effects can be shattering. It is the equivalent of a "no-confidence" vote in the British House of Commons.

If a majority agree with the motion to vacate the chair the current Speaker is stripped of his or her office and a new election must be held.

This came into the general conversation here in Our Nation's Capital with the sudden announcement by Speaker John Boehner (R-Oh) that he would, in fact, be vacating the chair at the end of October.

I know you know this, but it bears repeating that the Constitution, in Article I, Section 2, instructs the House of Representatives to "chuse their Speaker and other Officers."

The way it generally works is before a new Congress begins (not this coming January, but the next one after the November 2016 elections) Republicans and Democrats caucus separately and decide on who they will select as their candidate for Speaker. The way the voting works is by House rule, it is not in the Constitution.

On the opening day of the new Congress there is a roll call vote that each Member must answer aloud declaring his or her choice for Speaker (whether one of the officially nominated people or not) or they might vote "Present."

A vote of "Present" comes into play because, according to the Clerk of the House's web page a candidate must receive an absolute majority of the votes cast. If all Members are alive, present and voting that number is 218 (half of 435+1). But if only 400 Members vote and, say, 50 of those vote "President" a candidate would need not 176 votes (half of 350+1) but would still need 201votes.

According to the U.S. House's web page the longest election for speaker occurred in 1885-86 when, after two months and 133 ballots the House changed its rules and allowed Nathaniel Banks of Massachusetts to become Speaker by plurality, instead of majority, vote.

That is not likely to happen when the House will gather to elect a successor to John Boehner. As we sit today, the most likely winner will be Rep. Kevin McCarthy (R-CA) who currently holds the number 2 spot in the House GOP hierarchy as Majority Leader.

Remember, the R and D candidates for speaker are chosen behind closed doors and usually by secret vote. Only the Floor vote is public.

And, because with the chair having been self-vacated by Boehner and McCarthy running to move up, a wholesale scramble in the GOP Conference will ensue.

One of the unassailable facts of leadership races is: Everyone lies. Well, that, in itself is an exaggeration, but not by much.

I Tweeted the other day "By next week, the total of firm supporters of all the Speaker candidates will rival the number of people who say they were at Woodstock."

Problem is, Member B might well have made that same declaration to Member C (and Members D, E and F) who also asked for his or her support.

After it is all over, there will be outliers who will get votes (as happened at the beginning of the 114th Congress this past January) but in the end the majority will likely prevail and Rep. Keven McCarthy will get a red phone installed in his house and will move into the Speaker's suite.

It is too early to write Speaker Boehner's political obit, though. October is going to be filled with twists and turns. As Bette Davis once famously warned, "Fasten your seatbelts. It's going to be a bumpy night."

On the Secret Decoder Ring Page today: Links to the Wikipedia page for the Speaker of the House, the Clerk of the House's description of how the election process works, and that historical page about the longest Speaker election in American history.

Also a very nice Mullfoto of a train arriving at the Alexandria Amtrak station over the weekend.