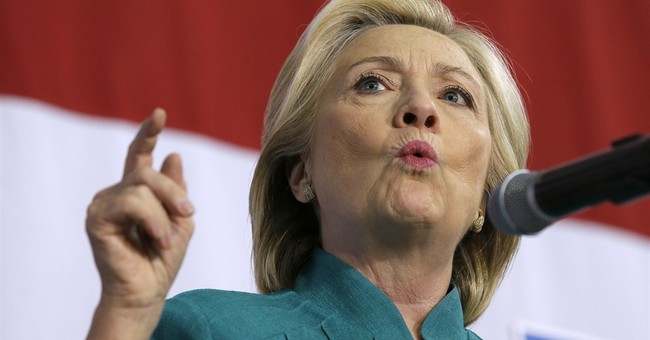 Hillary Clinton pulled it off.

It was monarchal, and certainly not a woman-of-the-people type of event, but she and her campaign pulled off a high visibility, high risk, high cost re-introduction event on a place called Roosevelt Island in New York City. I don't know that it changed a single vote, but the speech got her back on the field.

Hillary Clinton is an accomplished public official. From First Lady of Arkansas, then First Lady of the United States, then U.S. Senator from New York, and most recently Secretary of State there is no other candidate on either side that can match her resume.

Hillary Clinton is the George H.W. Bush of her era.

After announcing her candidacy in an almost aw-shucks fashion in April, she and her campaign went into a four-corner offence that scored no points, but took time off the clock, and percentages off her polling numbers.

She still holds a huge lead over any other Democrat in America for the nomination, but poll after poll after poll showed her hold on her supporters dropping and her lead over potential Republican opponents shrinking.

The speech was fine. Clinton is not given to soaring rhetoric. To misquote Lloyd Bentsen, she's no Jack Kennedy. Nor, for that matter, Barack Obama.

The fact that there had to be a "relaunch" (although it was not called that by the campaign) tells us a great deal. The fact is, the two candidates that had long been supposed to meet in the finals in November 2016 - Clinton and Jeb Bush - have both had a rocky few months.

Her list of domestic priorities was State-of-the-Union-like and like an SOTU speech there were howls from those who wanted her to mention issues she didn't, and those who desired that some issues that were mentioned, had been left out.

It was quickly pointed out that she did not address either the State Department email problems, nor the issues surrounding the financing of the family's Clinton Foundation.

She didn't answer those questions on the Sunday shows because she wasn't on any of them.

True to her continued pattern of campaigning only when, where, and how she wants; the campaign flooded the zone with surrogates yesterday. And the Sunday shows took the bait.

But, neither did she take a position on the biggest story of the day - the Trade Promotion Authority votes in the House and Senate.

She sort of danced around it on Sunday in Iowa when, according to CNN she said,

"There are some specifics in there that could and should be changed. So I am hoping that's what happens now - let's take the lemons and turn it into lemonade."

"Either Clinton isn't familiar with the very basics of [trade promotion authority] debate or she is being incredibly disingenuous."

The LA Times reported her saying:

"The President should listen to and work with his allies in Congress, starting with Nancy Pelosi, who have expressed their concerns about the impact that a weak agreement would have on our workers."

Which was probably greeted with cheers of joy and high-fiving in the White House where the President is still licking his wounds over having personally gone to the Hill last week to beg Nancy Pelosi's help and was, as we say, rebuffed.

Jeb Bush will have his turn at bat later today when he officially announces his candidacy and the comparisons with Clinton will abound today and for as long as they both survive as candidates.

Bush is fresh off a largely non-news-making trip to Europe. That's about the best the Bush campaign could have hoped for so, if that was the test it, was a success. But, like Clinton's speech on Saturday it didn't move any votes.

I believe, following Bush's entry, the last top tier candidate still holding back is Scott Walker. John Kasich is hiring senior advisors, but beginning to fund raise at this late date will be daunting against the existing, strong field.

Chris Christie has not announced but his press operation appears to have moved into a new, higher gear over the past week, or so which tells me they're getting ready to go.

But, as to Saturday. Hillary Clinton pulled it off.

On the Secret Decoder Ring today. The Washington Post's view of the Queens Speech, and the LA Times look at her Trade answers in Iowa.

Also a Mullfoto showing that I am getting wiser with age.