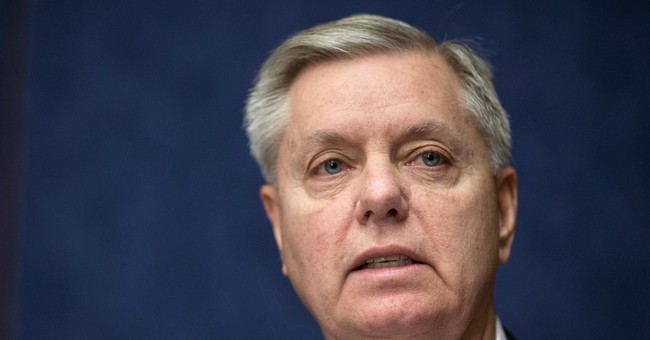 · With the entry into the race for the Republican nomination for President today of South Carolina Senator, Lindsey Graham, that will bring the number of officially declared candidates to nine. Former Governor of New York George Pataki announced last week.

· The two questions I am most often asked are:

Why is so-and-so running?

How does one of these candidates differentiate him/her self from the field?

· Let's take them in order. The only candidate on the GOP side that I would put down as a purely "Vanity Candidate" is Dr. Ben Carson. As far as I know he has no experience in politics, policy, nor governing. We have seven years' experience with a Presidential candidate whose principle talent was giving a good speech.

· Oh, wait. I forgot about Donald Trump. Now that I've remembered, I'll forget again if I can.

· Let's take the latest two: Pataki was a successful Governor of New York and Governors of New York and California routinely take singing lessons to hum "Hail to the Chief" while in the shower. Also, Pataki's people looked over the field and didn't see anyone in the Jon Huntsman slot. If you think there will be a significant number of Centrist voters this time in the primaries, and there is not one else fishing out of that side of the pond, why not give it a shot?

· Huntsman's strategy was legitimate, by the way. The campaign's execution was dreadful.

· Lindsey Graham has two things going for him: One, he is a recognized foreign policy expert. Two, he's from South Carolina so reporters (and the other candidates) have to pay attention to him.

· The reason they have to pay attention to him is because South Carolina is fourth in line of contests and the first southern primary. Candidates have already spent time there, hired staff, and set up offices.

· If Graham were from Missouri no one would care.

· On the second question, I can explain it in two words: Rand Paul.

· Paul has not only carved out a role for himself that is far, far different than anyone else on the list (with the possible exception of Ted Cruz), but he has done it on the issue(s) not by getting into an ad hominem war with the President or the Congressional leadership.

· I don't agree with him on the Patriot Act, but Rand Paul has certainly differentiated himself from his co-Candidates. The big loser in all that is the aforementioned Ted Cruz. Has anyone heard from him in the past two weeks?

· Speaking of candidates we not heard much from, Scott Walker's tending to his legislative garden in Wisconsin hasn't, apparently, hurt him in Iowa. A poll conducted for Bloomberg and the Des Moines Register has Governor Walker leading the pack with 17 percent of likely caucus goers.

· Behind Walker tied for second were Ben Carson and Rand Paul at 10 percent.

· One percentage point back were Jeb Bush and Mike Huckabee at nine.

· Marco Rubio and Rick Santorum are at six. Ted Cruz is at five percent.

· As we move smartly into June, the field will more firmly take shape. If someone like Ohio Governor John Kasich is serious, then June will have to be his month.

· Jeb Bush needs to stop his slide and getting officially into the race might help accomplish that.

· The issue of how to conduct debates with so many candidates in the race is buzzing around the power centers at Fox News Channel and the Republican National Committee. I had a great idea: Construct a giant lazy Susan and have the candidates sit on it facing out toward an audience. Debate in the Round.

· We have conducted debates about the same way for centuries in the United States. Maybe it's time to come up with a completely different paradigm. Perhaps have each candidate sit in front of a computer screen with a camera and answer questions, not sequentially, but as they come in.