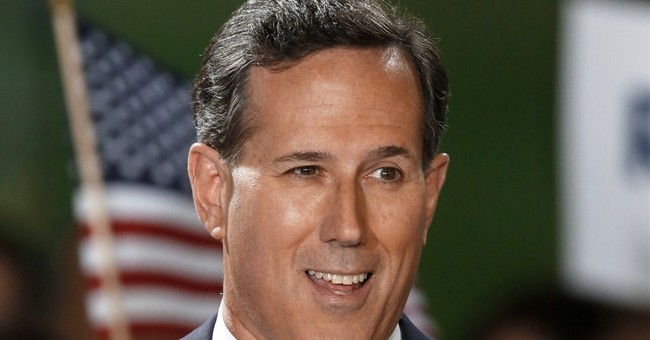 · Santorum made a run at the nomination four years ago, rising from totally known outside of Pennsylvania to running second to the eventual nominee, Mitt Romney.

· Santorum - along with Mike Huckabee and Chris Christie - has a timing problem.

· In the 1980 I worked as press secretary for the Congressman from Huntington, Indiana running against Senator Birch Bayh. That Congressman was Dan Quayle.

· We were on the road one day and asked him, if he lost (which he did not) would he run again. He said he would not. He said, in effect:

· That still leaves double-digits worth of candidates whose time might be 2016 so Republicans, unlike Democrats, are not likely to run out of people.

· Huckabee and Santorum share a similar problem: They have to do as well in Iowa next year as they did in the years when they were active candidates. That is to say, they have to win or they will not have done as well.

· Obviously, both of them can't win Iowa so at least one of them has to leave putting on that brave face that candidates do when they pretend this was all part of their grand scheme.

· Sort of like the President of FIFA Sepp Blatter pretending that watching most of his senior staff being frog marched out of their five star hotel, having been arrested for all manner of bribery and other financial skullduggery was actually a good thing.

· The first tier of candidates for the GOP hasn't changed. It is still (in alphabetical order) Jeb Bush, Rand Paul, Marco Rubio, and Scott Walker.

· Rubio has had a surge, but my long experience in this stuff is that no one wins wire-to-wire, so we'll see he can sustain it.

· Paul is starting to look like the kid who wants to make the varsity basketball team and so keeps picking fights with the other players in order to be noticed by the coaches.

· Walker appears to be taking some time to manage the State of Wisconsin although the AP reported yesterday that his Gubernatorial Election Committee sent an email/survey out asking for "their opinions on a variety of national issues and foreign policy."

· Bush, too, appears to have throttled back having not only bungled a pretty simple question on the Iraq war tossed at him by Megyn Kelly, but then needing three days to try and fix it. I expect he is in heavy learning mode precedent to his upcoming overseas trip.

· One of the things to keep in mind, as we enter June of the off-year, is that this is like spring training in the Majors Leagues.

· Those of us who make all or part of our living watching politics notice every rhetorical stumble chasing a fly ball, every mistake covering first on a bunt, every base running error.

· In the MLB the only people who care about the kid from AA playing second in a split-squad game midway through spring training are our equivalents in the baseball world.

· Like Spring Training, occasionally a "walk-on" does well enough to make the 25-man opening day squad. That's what Ben Carson and Carly Fiorina are hoping for.

· Dr. Carson would not let me scrub in on a surgery he was about to perform; and Mrs. Fiorina would not have considered someone with zero business experience to replace her as the head of HP. Yet, they think they can be a successful President of the United States.

· We're in the seventh year of someone who gives a good speech but had no training for the job. How is that working out?

· The GOP field will probably be set by July 4. June will likely see the conversion from "exploring" to "announced" for all of the candidates we currently think are in. We will also see decisions from Ohio Gov. John Kasich, SC Sen. Lindsay Graham, and the aforementioned Donald Trump.

LAD LINK: Here's the link to Reed's weekly column. This is about national security generally, and relations with China in particular.

· On the Secret Decoder Ring today. Links to the CNN look at Santorum and the Wikipedia entry of who is officially in and who is still exploring.

Also a Mullfoto of a food truck in downtown Washington, DC that was a major disappointment yesterday.