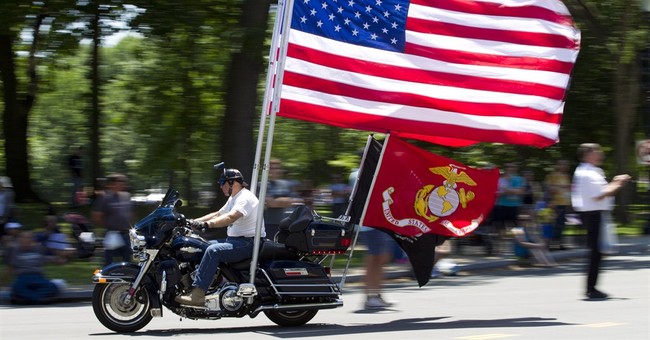 Editor's note: This is the 14th anniversary of this edition of Mullings which was first written for Memorial Day, 2001 - four months before 9/11. Our son, Reed, was a young member of the team in charge of President George W. Bush's visit to Arlington Memorial Cemetery on that day.

We went to Arlington National Cemetery to attend the annual Memorial Day observance. The entrance to Arlington National Cemetery is directly across the Potomac River from the Lincoln Memorial. These two historical, mystical, sites are connected by the Memorial Bridge. At the entrance to the Cemetery there is a sign which asks visitors to keep in mind the true nature of this place:

These are hallowed grounds.

The Mullings Director of Standards & Practices and I made our way up and down the curving walkways, past the small groups of school-aged children and their chaperones listening to docents working to inspire groups of students. We passed rows and rows of American flags which had been placed in the ground in front of each and every headstone. There are over a quarter of a million heroes buried at Arlington.

Generals and privates. Admirals and seamen.

Each headstone gets its own flag.

Each flag, the same size.

Each life, the equal of every other.

We walked the familiar grounds, grass wet from days of thunder storms, the morning still cloudy and threatening. Having found what we were looking for, we paused and reflected.

Entering the Amphitheater we each took one of the small American flags which were being handed out by elderly vets and read the line from Lincoln's Gettysburg Address inscribed above the stage:

"We, here, highly resolve that those dead shall not have died in vain."

On cue, the Air Force Band and Chorus began to perform. On cue, the sun peeked out.

Off in the distance, there was a barked order followed by the report of a cannon, then another order, another report. Twenty-one times; announcing the arrival of the Commander-in-Chief on the grounds.

During it all, the crowd stood silently.

At the playing of the National Anthem, military personnel snapped a salute, civilians put hands on hearts.

The President placed a wreath at the Tomb of the Unknowns which is located to the rear of the Amphitheater on a large, elevated deck, out of our sight.

We could hear, very faintly, the sound of taps.

The crowd was hardly breathing; as if breathing, alone, might drown out the sound of the bugle.

The President arrived on the stage without Ruffles and Flourishes.

The crowd was silent.

This was not a ceremony of pomp and circumstance, nor an occasion for soaring rhetoric.

The President spoke, quietly, of sacrifice, and of duty, and of honor. He spoke of young men and young women who would never live out their lives. He spoke of a last kiss between a husband and his wife; of a last wink and wisecrack of a brother to a sister as a train pulled out of a station; of a father and his son hugging for a final time at an airport.

Afterward, we stood at the Tomb of the Unknowns to watch the Changing of the Guard; the silent military ballet that takes place there 24 hours a day, seven days a week.

Arlington National Cemetery, on Memorial Day, has nothing to do with the sweep and grandeur of history, nor the gigantic commitment of resources to battles and wars; nor grand strategies and brilliant tactics.

It is a place where - and the day when - we remember the individual men and women who were killed at Bull Run, and Belleau-Wood, at Iwo Jima, on Omaha Beach, and in Korea, Viet Nam, Afghanistan, and Iraq and all the other un-locatable places with unpronounceable names where we have too often sent young men and women to fight and, too often, to die.

Arlington National Cemetery, on Memorial Day, has everything to do with a single white headstone nestled in a neat row among all the other white headstones next to it, in front of it, and behind it. Up hills and down swales.

It stands, along with the others, in silent acceptance of a nation's gratitude.

Having found it, we paused at the one white headstone. The one among a quarter of a million. The one with the words carved upon it:

Flags in hand, in the wet grass, on a gray morning of Memorial Day at Arlington National Cemetery, we once again paid our respects to her dad.

And prayed silently, that he, here in the company of his comrades, rest.