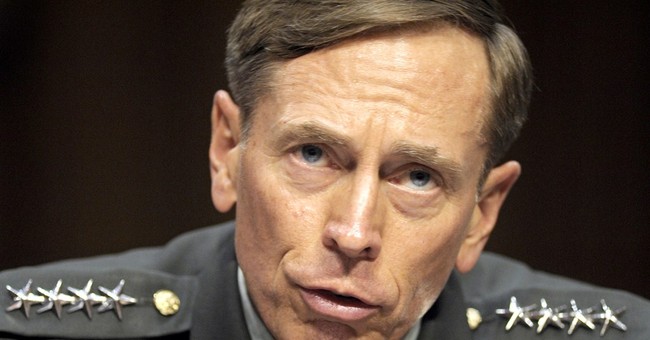 Last week General David Petraeus, as the result of a plea agreement, was sentenced to two years probation and a $100,000 fine for the crime of, as reported by CNN.com, "sharing classified information with his biographer and lover, Paula Broadwell." He was allowed to plead guilty to a misdemeanor rather than a felony.

The notebooks he shared with Broadwell "included notes from national security meetings, the identities of covert officers and more classified documents," according to CNN.

I have met David Petraeus although he would have to feign knowing me if we ran into one another. He rose to the rank of Four-Star General - the highest rank in the United States Military - on the basis of being smart, being good looking, being an excellent military strategist, and being no slouch at the kind of politics that is required in the rarified air of General Officers.

Federal law provides that there can be no more than seven Four-Star Generals in the U.S. Army at any one time, so the competition gets pretty fierce.

Two years probation for letting Broadwell have custody of highly classified materials is bad enough. Contained within the "Manual for Courts Martial" the crime of "adultery" carries a maximum punishment of:

"Dishonorable discharge, forfeiture of all pay and allowances and confinement for one year."

A USA Today article states: "A four-star officer retiring with 40 years of experience would receive a pension of $237,144, according to the Pentagon."

That means Petraeus' fine on the breach of confidential materials amounts to about five months of retirement pay - pay provided by you and me.

And he was not charged with adultery at all.

If he were not Four Star General Petraeus but, instead, Staff Sergeant David Petraeus does anyone doubt he would be today a resident of the Disciplinary Barracks at Ft. Leavenworth, Kansas, serving who knows how many years, stripped of rank and retirement pay?

Let us now turn our attention to the other privileged group that made news last week.

The New York Times - not the Vast Right Wing Conspiratorial Newsletter and Shopping Guide - made the connection between Hillary Clinton as Secretary of State and Bill Clinton as the head of the Clinton Foundation and Vladimir Putin getting control of 20 percent of the uranium deposits in the United States.

In sum, while Clinton (Hillary) was Secretary of State, Clinton (Bill) appears to have been involved in helping Putin (Vladimir) gain control of a Canadian company that owns uranium assets in the United States.

The Clintons (Billary) and their defenders will maintain that there was nothing wrong and if there was something wrong it was done without either of their knowledge or approval.

Except that during this flurry of activity Clinton (Bill) was paid $500,000 for one speech under the sponsorship of a financial institution in Russia while people and organizations with a stake in the sale were donating millions of dollars to the Foundation (Clinton).

Over the weekend that same Times (New York) reported that the Clinton Foundation had announced it was looking at its tax returns for this period because, although it had reported donations from "foreign entities" in 2009 of "more than $122 million," it reported zero donations from foreign entities in 2010, 2011 or 2012 - all years when Clinton (Hillary) was Secretary of State.

In the words of former Texas Governor Rick Perry: Oops.

We don't know if there was there a quo following the quid between the Clintons (Bill and Hillary) and the Russian (Putin, Vladimir).

But, if this were about a foundation and a federal employee not named "Clinton" there would be a line of people under subpoena outside the E. Barrett Prettyman Federal Courthouse just down the hill from the U.S. Capitol building waiting to testify before a grand jury.

We know that rank has its privileges, but in these two cases the privileges smell rank.