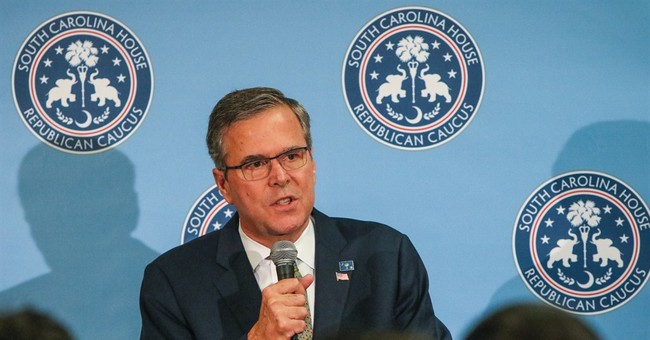 Hi. My name is Rich Galen

Yes, Mr. Galen. Thanks for coming in. I'm Roberta Smith. I'm coordinating the hiring for the Gov. Al Newman '16 campaign for President.

What job are you applying for?

Senior Advisor for what?

Let's put that aside for a moment, Mr. Galen. I have some questions to ask before we go too much farther.

First have you written any columns, blogs, Tweets or Facebook entries?

How many have you written, would you say?

I think, 5,000. But when I joined I thought having the most friends was a contest so ?

Yes. And Tweets? How many Tweets have you, er, Tweeted?

Ok. We'll need copies of any and all writing, columns, blogs, Tweets and Facebook updates. We'll also need any notes, transcripts, or recordings of any speeches, radio, or TV appearances.

To see if you've ever written or said anything that might be provocative and, therefore, potentially embarrassing to Governor Newman should you be hired.

First, if they weren't at least a little provocative no one would care what I wrote or said; and Second, printing all that will be the centennial output of several old growth forests.

They're all stored on Hillary Clinton's server, so I'll have to get back to you.

· That conversation, or one like it, is going on in political offices all over Capitol Hill and at every nascent Presidential campaign in the country.

· Both Governor Jeb Bush and Governor Scott Walker fired internet/social media gurus within hours of their hiring because of what they had posted, in some cases years ago.

· The whole Rep. Aaron Schock episode started with an amusing Style section sidebar about his office being decorated in a Downton Abbey motif. His press secretary tried to tamp it down, which drew attention his off-campus Tweets that turned out to be really ugly toward his Capitol Hill neighbors.

· That kept the story alive long enough for other people to begin digging in to the Congressman's travel, real estate, and other outside activities and bumpity-bump: Schock announced his resignation earlier this week.

· Jeb Bush's chief technology officer, Ethan Czahor, lasted a few hours following a HuffingtonPost.com report that in 2008 he "made a string of inflammatory remarks on the website of his college radio show."

· Scott Walker's "digital strategist," Liz Mair left his organization after she was quoted as saying that at least some Iowans were "morons." Brietbart.com complained that "Mair's support for amnesty for illegal aliens" would "dog Walker's campaign."

· How does this stuff come out? The professional opposition research firms that have sprung up over the past few years put the NSA to shame when it comes to following digital breadcrumbs.

· And, while a candidate's allies will go to great lengths to protect the principal (see, also Sec. Clinton's emails), no donor or major player will lift a finger to help a staffer caught with their fingers on the SEND key.

· One of the issues with Twitter, etc. is to write something that will get other people to make it a "Favorite" and/or to "ReTweet" it to their followers. The game is to get as many "Followers" of your own as you can.

· There's an old saying at the Galen School of Political Press: "Anyone can make news if they say something stupid enough."

· Here are some guiding principals for young people who want to be professional political operatives:

If you've been drinking, don't Tweet at all. It will be stupid stuff

If you pause for even a nano-second before hitting the "Tweet" key, erase it. Your internal governor is trying to tell you something.

You can't generate context in 140 characters

Irony doesn't render properly on Twitter. And, it has never worked in Iowa

· On the Secret Decoder Ring today: Links to the Schock, Walker and Bush stories.