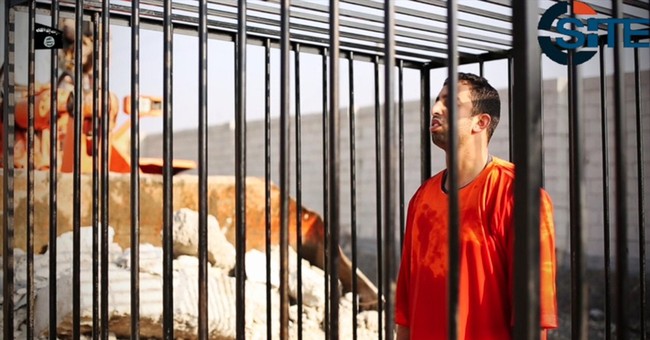 The recent murder of a Jordanian pilot at the hands of ISIS or ISIL or IS or whatever they call themselves should be a major kick in the butt for the Obama Administration that air attacks alone will not be enough.

Barack Obama and his foreign policy team have got to come to grips with the fact that the comic book world in which they are living has no relationship to the real world.

The Jordanian pilot, as you know, was burned alive in early January. The video of the grisly murder was only recently released by ISIS.

In his remarks at a White House meeting on another subject, Obama could not find the word “terrorists” in his vocabulary (which he had, in fact, called them during his State of the Union address).

Obama said the video was “just one more indication of the viciousness and barbarity of this organization” and said “whatever ideology they are operating off of it’s bankrupt.”

Jordan didn’t tarry in its response. It hanged two Al Qaeda terrorists while Jordan’s King Abdulla was still in the United States. The King said Jordan would fight ISIS “until we run out of fuel and bullets.”

Societies only exist because of a shared compact that we will not do each other grievous bodily harm while walking along the street, driving in our cars, or sitting in our homes.

When that compact breaks down, only chaos can ensue.

I’m not talking about a bunch of people throwing garbage cans through shop windows in a small town in Missouri. I’m talking about individuals and groups operating under some moral theory that says it’s OK to walk up to someone and kill them with an ax; or walk into a grocery story and shoot people who are shopping or stroll up to a police car and murder two cops.

Well, you might say, that Jordanian pilot wasn’t sitting in his house. He was bombing ISIS positions.

Yes. Correct. But there are rules even in war. A prisoner of war is entitled to certain protections. Pilots are especially vulnerable because if they crash or are shot down, they are almost always alone or with a very small group.

There is no rule of war that allows for putting an enemy combatant into a cage, light him on fire, and shoot a video of his death.

When terrorists and murderers and killers promulgate atrocities it is incumbent upon civilized people to band together and stop them. When they are part of an organized group, like Al Qaeda or ISIS, it requires the joint efforts of many nations to do the job.

We found out this week that the United Arab Emirates which has been a full partner in the air war against ISIL, according to Al Jazeera, “has not flown combat missions over Syria since last December, citing fears for their pilots' safety in the case of downed planes.”

This is February. The President, in his State of the Union address in January said:

“We are leading a broad coalition, including Arab nations, to degrade and ultimately destroy this terrorist group.” [emphasis mine]

Maybe no one told the President that the UAE had taken its marbles and gone home a month earlier.

If the President doesn’t want to have American “boots on the ground” (a phrase which, if I never hear again, will suit me just fine) then he needs to use the good offices of the President of the United States to convince the Saudis and the Egyptians, and the Kuwaitis and the Turks to lace ‘em up and get in there to stop these terrorists.

But, President Obama doesn’t appear to have any good offices. His dithering over attacking Assad in the earlier days of the Syrian civil war and ceding leadership to Vladimir Putin did not go unnoticed by the neighbors.

They don’t like Putin and they don’t trust Obama.

How do you think this movie will end.

Since the early part of the 20th Century the United States of America has been looked upon as the senior moral authority on the planet. Not everyone has agreed with our positions all the time. Notably during World Wars I and II there was significant opposition to our position.

Winston Churchill is reported to have said:

“Americans will always do the right thing, but only after they have tried everything else.”

I don’t know if Churchill actually said that or not, but it’s time for President Obama and his foreign policy staff to, if not try “everything else” try something.