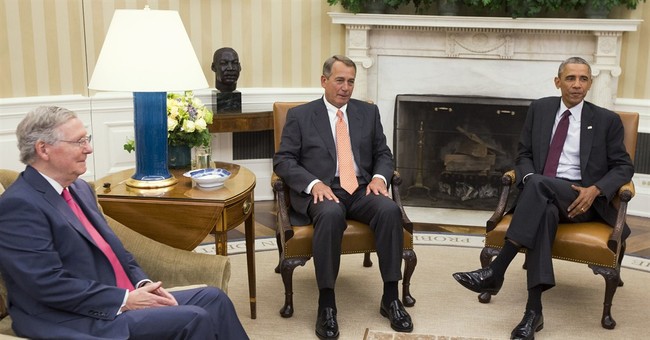 At approximately noon on Tuesday January 6, 2015 the Clerk of the House and the Secretary of the Senate will bang their gavels calling their respective Chambers to order and, for the 114th time since 1789, a new United States Congress will begin.

"The Congress shall assemble at least once in every year, and such meeting shall begin at noon on the 3d day of January, unless they shall by law appoint a different day."

This Amendment fixed a Constitutional anomaly (Article I, Section 4, Clause 2) that held:

"The Congress shall assemble at least once in every Year, and such Meeting shall be on the first Monday in December, unless they shall by Law appoint a different Day."

You can imagine the mischief that the Congress might get into when control of one or both chambers changed hands and the old leadership have four full months to stack the deck before they had to leave the bridge.

The 20th Amendment officially fixes noon on January 20th following an election as the beginning (and ending) of Presidential terms.

The last President to be inaugurated on March 4 was Franklin Roosevelt in 1933.

The House will do some housekeeping, swear in all the Members, and elect a Speaker.

The vote for Speaker is one of the few in which each Member must respond to his or her name and call out their choice.

Republicans start the 114th Congress with 246 Members. Not all of them will vote for John Boehner (R-Oh) to be re-elected Speaker, but it is not at all likely that more than 28 will decline to allow Boehner to continue leading the House.

Democrats in the House will largely (but not unanimously) vote for Nancy Pelosi to be Speaker but she won't win, so she will smile bravely as she hands a ceremonial gavel to Boehner (who, by this time, will be sobbing like he's been watching a cute cat video).

Over in the Senate about a third of the Members will be sworn in - only those newly- or re- elected. The rest are holdovers who do not have to renew their vows.

They, too, will do housekeeping including adopting rules and resolutions which will include naming Mitch McConnell (R-Ky) as Majority Leader - a post that has no Constitutional significance - and will also elect a President Pro-Tempore, a post that does.

That first Congress (meeting first in New York then in Philadelphia) was pretty active. Among other things it adopted the first 10 Amendments to the Constitution which we now call "The Bill of Rights" but also, according to the House' own history:

"started filling out the U.S. Constitution's skeletal framework by addressing concerns raised during ratification and by creating the federal architecture-a revenue system, the first executive departments, and the judiciary. Congress also assumed state Revolutionary War debts and decided the location of the future capital."

Not bad, right out of the box.

The 114th Congress will have its hands full as well - something we will doubtless be discussing with some regularity over the next two years.

Obamacare, the tax code, immigration, telecommunications, the "Three E's" - environment, energy & education - not to mention appropriations and budget issues among many others.

What we don't know is whether the 114th Congress will be like the 1st: tackling and voting on difficult and far-reaching issues or, as Shakespeare might have said, be two years "full of sound and fury, signifying nothing."

What we do know is that twice a week, in Mullings, it will be "a tale told by an idiot."