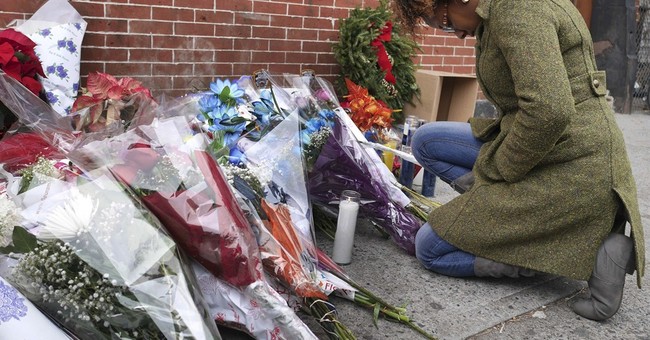 Two New York City cops, Wenjian Liu (38) and Rafael Ramos (40), were murdered Saturday afternoon sitting in their marked car parked near what in New York is known as "a project" - typically a high-rise, low cost housing structure - where they were attempting, by virtue of their visibility, to protect the residents.

That very visibility led to their deaths as a gunman, Ismaaiyl Brinsley, walked up to the passenger side of the car, fired, and killed them both before running down into a subway entrance and shooting himself on the platform.

Brinsley is apparently from the Baltimore area who made his way to NYC after shooting his girlfriend in the stomach shortly after 5 AM Saturday. As of this writing there is

I can't imagine being a police officer. I have never had either the temperament or the physical skills to be entrusted with that level of responsibility.

According to the FBI's webpage, there are currently 34,822 New York City active police officers. In addition there are 14,704 civilian employees to protect the 8.4 million residents of the five boroughs.

According to another webpage, 112 police officers across the nation have died in the line of duty in 2014. Of those, 45 deaths were by gunfire, the biggest single reason by far.

Officers Liu and Ramos were not African-American. But, neither were they 40-ish White men named O'Hara, Rossi, nor Goldstein. Further official investigation (as opposed to further mindless conjecture) may help us understand why Brinsley was in Brooklyn, in that neighborhood and why he chose that car.

As surely as night follows day, the cable nets were on fire with charges and countercharges as to who was responsible for what the police commissioner William Bratton called "an assassination."

Too many people aimed their anguish at Al Sharpton for having whipped up anti-police sentiment with appearances in Ferguson, Missouri and Staten Island, New York.

As far as I'm concerned, Sharpton's career has been wholly built around showing up where people are hurting and fanning the flames of blame.

Doesn't matter. To my knowledge Sharpton never called for the assassination of police officers, at least not during the current unpleasantness and Al Sharpton didn't fire that gun. Any more than NRA executives have fired the guns in other senseless tragedies.

New York City Mayor Bill de Blasio, has likewise been held up to scorn by (amongst others) the Police Benevolent Association - the union of NYC cops - for doing some flame fanning of his own, according to ABC News:

"after a grand jury declined to indict an NYPD officer in the death of Eric Garner, a Staten Island man who died after he was put in a chokehold during an arrest for selling loose cigarettes.

"The mayor, whose wife is black, said he has spoken to his mixed race teen son about how he should act if he is stopped by police."

But, de Blasio didn't order those two officers to sit in that car, on that block, in that neighborhood on Saturday, any more than George W. Bush directed those planes into those buildings in 2001.

Twitter was alight with the fact that President Obama had made personal remarks after the deaths of Trayvon Martin, Martin Brown, and Eric Garner - but not for Officers Liu and Ramos. For starters, President had just begun his Winter holiday in Hawaii this past weekend, and secondly, the White House issued a statement on his behalf Saturday night:

"I unconditionally condemn today's murder of two police officers in New York City. Two brave men won't be going home to their loved ones tonight, and for that, there is no justification. The officers who serve and protect our communities risk their own safety for ours every single day - and they deserve our respect and gratitude every single day.

"Tonight, I ask people to reject violence and words that harm, and turn to words that heal - prayer, patient dialogue, and sympathy for the friends and family of the fallen."

It would not surprise me if we learned that the President has placed a phone call to the families of each of the murdered officers to offer his personal condolences.

On the Secret Decoder Ring today: Links to webpages of the number and cause of police officer deaths in 2014, to the number of police in New York, and to the NY Times' backgrounder on what is known about Brisley.

Man raised nearly half-a-million for Black Lives Matter but spent the money on himself
Hotair
NYT Drives a Stake Thru the Heart of Its Own Claim of What Trump Paid in Taxes, Lets Other Disturbing Info Slip Out
Redstate