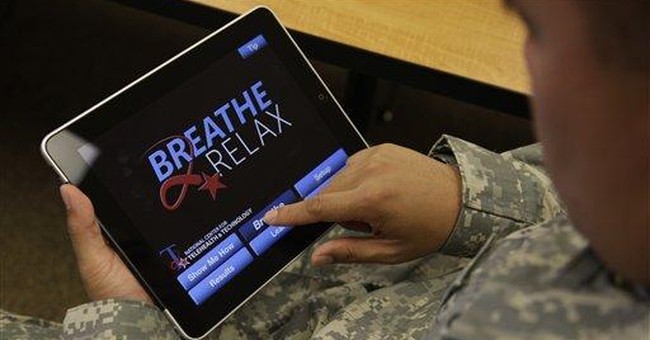 About a week ago a man named Omar Gonzalez jumped over a fence along Pennsylvania Avenue in Washington, DC; ran across a lawn; and, was finally tackled as he crossed the threshold of the White House.

His family has said the Gonzalez is a veteran who serve three tours in Iraq. They say he has been seeing a therapist at Fort Hood, Texas; suffering from Post Traumatic Stress Disorder.

That is our subject today.

Post Traumatic Stress Disorder is the phrase in general use to describe the psychological issues that often - not always, but certainly not never - appear after military service in a war zone.

According to the Mayo Clinic, PTSD is defined as:

"a mental health condition that is triggered by a terrifying event - either experiencing it or witnessing it. Symptoms may include flashbacks, nightmares and severe anxiety, as well as uncontrollable thoughts about the event."

I understand that PTSD can occur after anything from involvement a traffic accident to a forest fire, or from being physically or emotionally abused, but, I am most familiar with the military aspects.

According to the Department of Veterans Affairs, PTSD occurs:

"In about 11-20% of Veterans of the Iraq and Afghanistan wars (Operations Iraqi and Enduring Freedom),.

I used to be a PTSD denier. I believed, having never been to war, that if someone were tough enough they could go to war, come home and, assuming no physical wounds, resume their lives as before. On my worst days I confidently asserted that PTSD was a made-up condition allowing someone to get some form of disability payment.

As those of you who followed my exploits you may remember that I occasionally drifted out of the Green Zone to the point that I had to qualify for, and carry, a sidearm.

Even those who never left the Green Zone were subject to regular mortar and rocket attacks. Among the civilians (of whom I was one) some wouldn't leave the Palace - which was headquarters for both the civilian and military commands - to go to their trailer without what was called "Full Battle-Rattle" - helmet and body armor. Some couldn't even deal with that level of stress and had to go home.

Prior to leaving for Baghdad, I bought, and had shipped, both a vest with ceramic plates and a Kevlar vest I could wear under my shirt. I wore the latter when I did "stand-ups" on a balcony overlooking downtown Baghdad for one cable network or another. My theory was: If I could see the street, then someone in the street could see me. I wore the former when I was outside of Baghdad.

I found that being in a war zone is a particular circumstance alien to any other experience. The "Field of Battle" that NFL announcers so earnestly talk about is not the same as the Field of Battle where someone is actually trying to kill you.

When I got home I found that the rewiring of my brain - the survival instinct - was not as easily un-rewired as I might have wanted.

Thunderstorms made me freeze when I saw the lightning until I heard the thunder. I wasn't flashing back to rockets and mortars. What upset me was that I couldn't control the anatomical response. Happily, that faded.

Any loud noise - dropping the lid of a dumpster - would cause me to freeze. I didn't hang around that many dumpsters so that faded fairly quickly, too.

While driving up the New Jersey Turnpike to visit my mom I would scan every overpass to make certain no one was up there with a weapon. I didn't realize I was doing that until my son, Reed, traveling with me one time said "No one's up there trying to shoot you." That faded.

The one thing that has not gone totally away, 10 years on, is my discomfort at driving over anything in the roadway: A Safeway bag, a McDonald's wrapper, anything. I no longer swerve like a maniac to avoid it, but even today I clench my teeth as my vehicle passes over it.

Is any of this going to make me jump over the fence in front of the White House? No. Of course not. But, it has changed my opinion of those for whom PTSD is not a series of relatively minor annoyances, as in my case, but a true inability to re-adjust to life outside a war zone.

As we prepare to send yet another round of young men and women into medical and military war zones, we should all remember that PTSD is yet one more heavy price that more than a million service members pay every day for the privilege of having been an American hero.

On the Secret Decoder Ring page today: Links to the VA page and to the page of statistics.

Also a troubling Mullfoto that should worry FedEx.